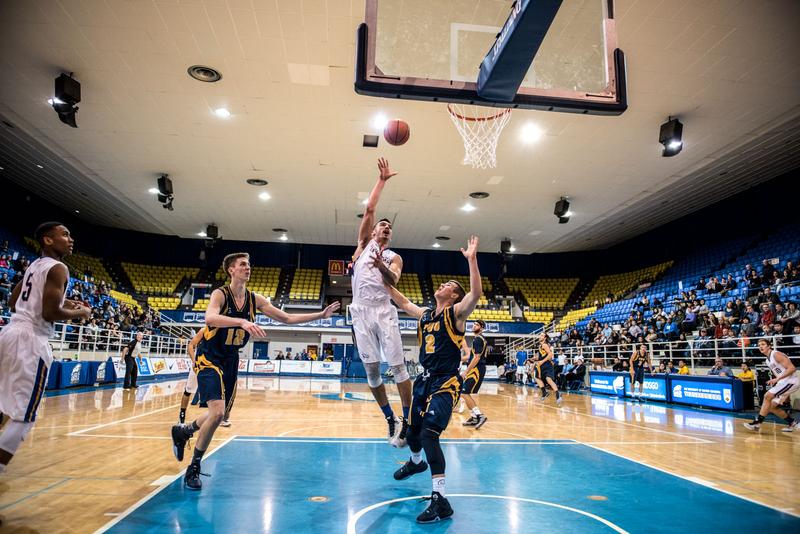 The UBC men’s basketball team continued to show their offensive muscle this weekend, sweeping the Trinity Western University Spartans 94-69 on Friday and 85-75 on Saturday.

In the first quarter, despite only shooting 2 for 13 from outside the arc, UBC’s 14 points in the paint helped them establish an early 26-13 lead.

In the first minute of the second frame, Dominic Gilbert nailed two jumpers — one off a steal and assist from A.J. Holloway. Coach Kevin Hanson’s squad also out rebounded the Spartans 31-19 in the first half while disallowing any second chance points for TWU.

A late push from the Spartans saw Eric Rogers hitting a jumper along with layups from Dean Richey and Lucas Mannes. Mannes and Richey led their team with 14 points each.

Will Ondrik opened scoring in the second half with a quick steal and three-point bucket. Strong rebounding allowed the T-Birds to pick up a handful of layups, extending their lead to 29 by the seven minute mark.

Foul-heavy TWU defence in the third quarter allowed the T-Birds to knock down an impressive 16 for 21 from the line.

Coach Kevin Hanson was conflicted over the fourth quarter performance. Both teams scored 23 points in the fourth, the UBC bench contributed 23 minutes and 11 points.

"I [like] the fact that we were able to get everybody into the game. We did some good defensive things in the first half. Obviously I was’t too happy with the defence in the fourth quarter there," Hanson said.

Saturday night saw a renewed effort from TWU who shot 43.3 per cent from the field overall, including going 14 for 29 in the first quarter. The top three Spartan scorers — Vartan Tanielian, Mannes and Smith — combined for 53 of 75 team points.

The ‘Birds climbed back from a small TWU lead early on and battled back-and-forth before establishing a steady double-digit lead in the fourth quarter.

TWU managed to keep UBC on their toes defensively and lost by just 10 points at a final score of 85-75 for the T-Birds.