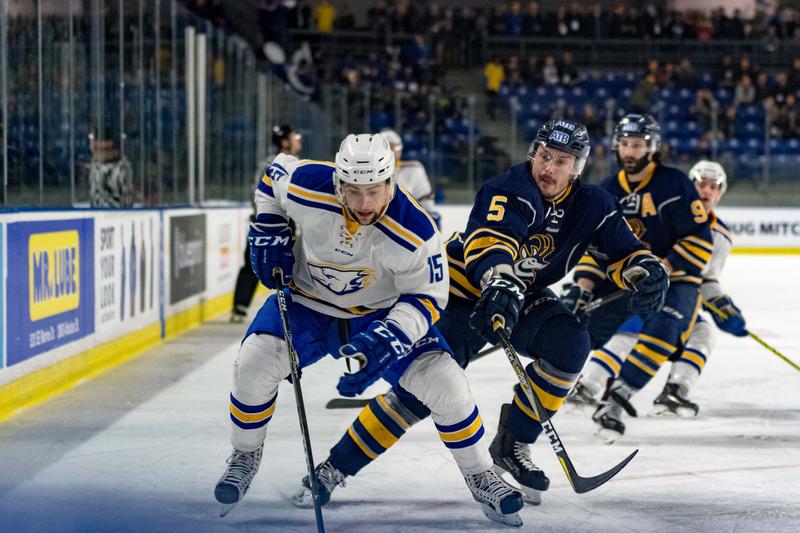 Lethbridge's Jeff Rayman tries to get a stick in against UBC's Adam Rossignol. Jeremy Johnson-Silvers

After a second straight Winter Classic win, the men's hockey team looked to continue their winning ways Saturday afternoon at home against a Pronghorns team looking for revenge after the Friday night heartbreaker. The T-Birds came to play though, and with the help of their starting goalie Matt Hewitt, they were able to weather a storm of 47 shots to pick up a double-overtime 4-3 win.

The first period saw both teams bust out of the gates hungry for crucial points to count towards their divisional playoff bids. Through the first three minutes, UBC controlled the ice, dominating puck possession and owning the neutral zone.

However, following an icing call at the 3:51 mark of the first period, momentum seemingly swayed in the Pronghorns’ favour. At 5:15, Lethbridge’s Mitchell Maxwell would get a pass sent his way as he drove the right wing on a 3-on-2 rush. The puck would fly by his stick, keeping Lethbridge at bay.

Lethbridge continued to come on strong with 2 minutes and 23 seconds left in the period, as Brandon Clowes squeaked one by Hewitt’s glove hand to give Lethbridge the 1-0 lead heading into the second. UBC was outshot 13 to 9 in the first, a stat they hoped to redeem in the final frames.

“It’s always something we focus on,” said UBC head coach Sven Butenschon, addressing the number of shots and quality chances for the T-Birds. “There’s a few key points that our team is based on and trying to generate more shots and chances is always at the top of the list. It’s something we’re not overly great at, we have a lot of guys who want to pass the puck and they’re not as selfish as I’d like them to be sometimes.”

The second period was strong for UBC — “probably [the] best period of the year,” according to Butenschon.

At the 2:31 mark, Hewitt took away a short side chance, diving back and stoning a Lethbridge opportunity off a loose puck. UBC had to rework their approach as not enough pucks were getting through to Lethbridge goalie Garret Hughson, with a distinct lack of quality chances.

UBC forward Matt Revel would get the 'Birds back in the game midway through the period, as he received a cross-ice feed from Carter Popoff and ripped his sixth goal of the season past Lethbridge's goalie just below the left face-off circle, knotting the game at one a-piece. Lethbridge answered back at the 13:37 mark, as Mitchell Maxwell took a feed off the half wall in front, walked around Hewitt and slid the puck by the netminder’s right pad.

With three minutes remaining in the second, UBC’s Chase Clayton dug a puck out of the opposition’s corner and circled in behind Lethbridge's net. Quickly and fluidly, he wrapped it around the far post, netting his fifth of the season. After two periods, it was all tied up at 2-2.

For one of the most penalized teams in the division, the ‘Birds really simplified their approach to generating chances, trying to stay out of the box and wear down the opposition’s defensive core. Their work paid off, as they only let Lethbridge have two power plays through the first two periods.

“I think at the start of the year especially, we were taking too many penalties and, lately, we’ve been staying out of the box and I think that’s been key to our success,” said Revel. “You know, we’d keep on giving them those chances to score on the power play, so, for us, we don’t want to be short-handed.”

The third period reflected how badly both teams wanted the win, as the physicality and overall aggressiveness was taken to a different level. Even so, the 3-2 Pronghorns lead stood for most of the period after Clint Filbrandt netted a power play goal early.

The 'Birds would get a power play at the 12:33 mark, but it was Lethbridge who came away with two shorthanded chances. Things didn’t look good for UBC, but, with Hewitt pulled late in the third, Revel’s second goal of the game would tie it all up with 32 seconds left. Great vision by Jerret Smith led him to a shot from the point, which was deflected in by Revel — taking the game to overtime.

In 4-on-4 play, and with 41 seconds left in the overtime, the puck came to a wide open Pronghorn, Blake Orban, in front. Hewitt was down and out after a kerfuffle in front of the net, but somehow he managed to reach up and make an impressively acrobatic desperation save.

That would be his second heroic save of the weekend, having solidified the Winter Classic win the previous evening with what he called a black-out save.

“I don’t think that’s something you can really teach,” Hewitt said of his save after Saturday's game. “I just saw the puck go up to the point, and I kind of just threw my glove up. I guess I kind of just got a little bit lucky on that save and I’ll take that bounce.”

No winner was decided after the first overtime, and the game would go to double overtime.

With 3:42 remaining in the 3-on-3 double overtime, UBC's Nick Buonassisi would solidify the comeback win for the T-Birds, driving wide on the left wing and releasing a slick shot that whizzed past the helmet of the Lethbridge netminder and pinged off the far side post and in.

“I just went far side on him. I was pretty tired and the defenseman was gaining on me,” said Buonassisi after the game. “I thought I had a breakaway, but I slowed up and ended up seeing some space on the far side there, and just shot it post and in. It was good.”

The T-Birds were down and had to battle back three times during the game, in part due to a big-time performance by Revel.

“It’s funny how the hockey gods work,” said Butenschon, addressing Revel’s performance. “You just stick to it, you do the right thing enough times, you will get rewarded. It’s funny he had so many nice chances and the one that goes in, in the third period, is just a little tip off his blade. It’s good that he’s going to the front of the net. That’s where good things happen.”

The team’s 12th win of the season puts them in third place in the West, only behind Alberta and Saskatchewan.

The team hosts Saskatchewan next weekend, where UBC will look to add more key points towards their playoff bid.