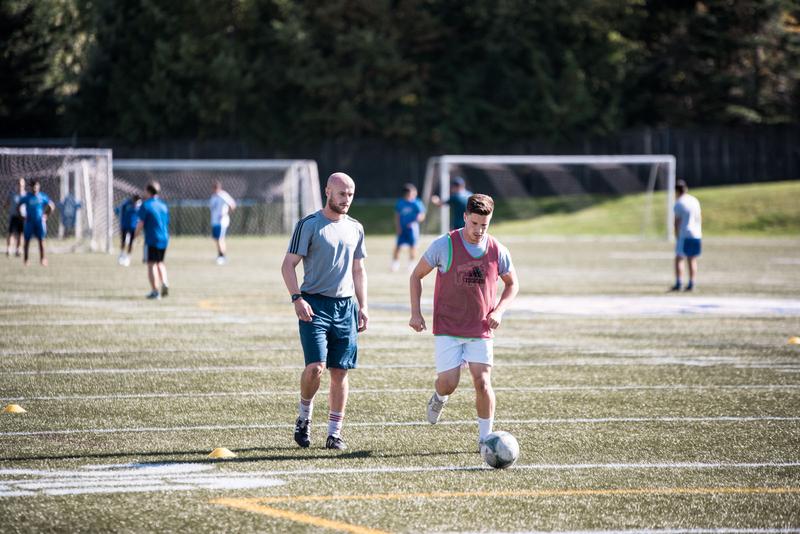 The 2015 men’s soccer season is underway and head coach Mike Mosher is looking to bring UBC its 14th national championship. Last year, the team lost to Alberta in the Canada West semi finals, preventing them the chance to capture a third straight title. With a number of exciting additions this year, Mosher expects to take his squad back to its winning ways.

Among the new faces this year is fifth year collegiate soccer veteran Justin Wallace, who believes his experience will be a big contributor to the team.

Having already proved his goal scoring ability in last week’s preseason match against his former team SFU, Mosher spoke highly of the 2013 CCAA player of the year.

“I think Justin can be one of the best players in the country,” said Mosher. “He’s a terrific player and I think he’s got the ability to maybe go on to the next level after this season with us.”

In addition, Gagan Dosanjh is returning to the Thunderbirds after brief spells with the Whitecaps U23 team and the NASL’s FC Edmonton. In 2013 Dosanjh was awarded the Bus Phillips Memorial Trophy which is given to the UBC male athlete of the year.

Mosher is excited to see Dosanjh and Wallace work together up front, along with Titouan Chopin. Chopin has the ability to beat players, one on one, and create goal scoring opportunities. Chopin is a first year student from Kaslo, B.C., who has experience playing with the Whitecaps Residency program.

Newly acquired goalkeeper Chad Bush is another player with professional experience, and one to watch, having spent one season with the Ottawa Fury. The 21-year-old freshman is regarded by Mosher as one of the best goalkeepers in Canada.

“[Bush] is the real deal in many ways. He can be a leader amongst our group as a whole. He trains really well; good role model for not only the other young goalkeepers but for the whole team.”

Mosher sees Bush as moving onto professional soccer after he leaves the Thunderbirds.

With the season only two months long, Mosher hopes his team is able to gel and build the team chemistry needed to make the run to nationals. Despite the obvious hints of concern, he remains confident in his team’s ability.

“I’m confident in the group of players that we’ve got. We’ve lost some really good players but we’ve added in a lot of quality and I think we’ve got a strong team that’s capable of doing great things.”

The Thunderbirds have already played several games this year. They hosted SFU in an annual showdown, beating their cross town rivals 1-0 in the exhibition game. The game, while earning the ‘Birds a preseason win, was unconvincing as SFU controlled play for most of the first half.

In their season opener, the team tied the University of Victoria, 1-1. The ‘Birds dropped an earlier lead within second of earning it.

While the year could have started on a stronger note, the team is looking good for the upcoming season and Mosher is aiming high.