After the pandemic led to the cancellations of most swim meets, the T-Birds were eager to get back into the pool this season, with the term culminating at the Canada West Championships in late November.

As four-time national champions, the T-Birds stood out as the favourites to win on both sides. Although UBC’s squads didn’t bring home both titles, both teams put up a strong showing with men finishing first and women finishing second.

The three-day meet, which took place in Edmonton on November 26 to 28, featured eight teams from across Western Canada, including a strong University of Calgary team that has served as tough competition for the T-Birds this season.

“I looked at the times. We have the UBC records on the scoreboard at the pool every day ... and I was like, ‘I can do that one. I'm close,’” Migneault said of his new record. “I went in with the objective of breaking that record and I did. It felt amazing.”

“I went in with the objective of breaking that record and I did. It felt amazing,” said Migneault (centre). Courtesy Brad Hamilton

Other members of the men’s team also came out strong, sweeping the podium not once, but twice, with first-time competitors Tayden Depol, Kier Ogilvie and Justice Migneault achieving a 1–2–3 finish in the 100m butterfly final. Tierney, Depol and teammate Matthew Crawford also swept in the 100m backstroke Sunday afternoon.

Attending his first Canada West Championship after cancellations impacted his first year, Migneault said the meet was a great experience, and that having the group objective of trying to win CanWest made the weekend all the more exciting.

Migneault added that the team went into the meet with high expectations of themselves and confidence.

The final men’s event of the weekend also ended with a record-breaking gold medal performance during the 4x100m medley relay, setting a new Canada West record that was nearly two seconds faster than the old record. 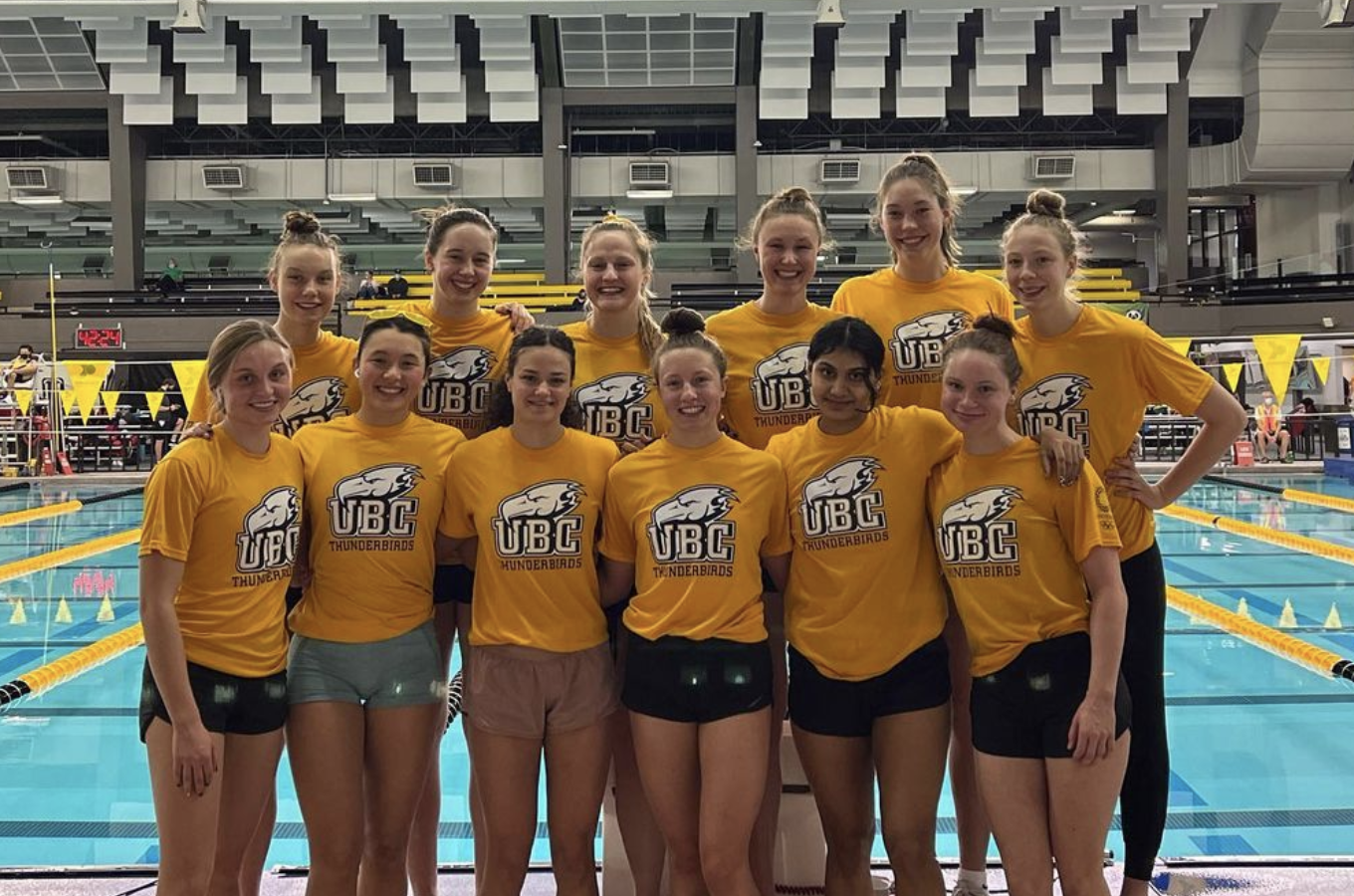 Despite the upset, first-year Emma O’Croinin was proud of her team’s efforts. “We just wanted to go in there and put up the best times we could and I think we all did that ... We can be proud of the work we did and the results we got.”

Their second place finish comes after facing tough competition from the Calgary Dinos; however, the lady ‘Birds put up a strong fight, including in the 4x100m freestyle relay, which they maintained gold-medal placing throughout, before falling behind Calgary’s Rebecca Smith in the last two metres.

O’Croinin, who was teammates with Smith at the 2019 World Championships, said that the strong competition is motivating. “It really pushes you to do your best when you're racing people of that caliber,” she said of Smith. 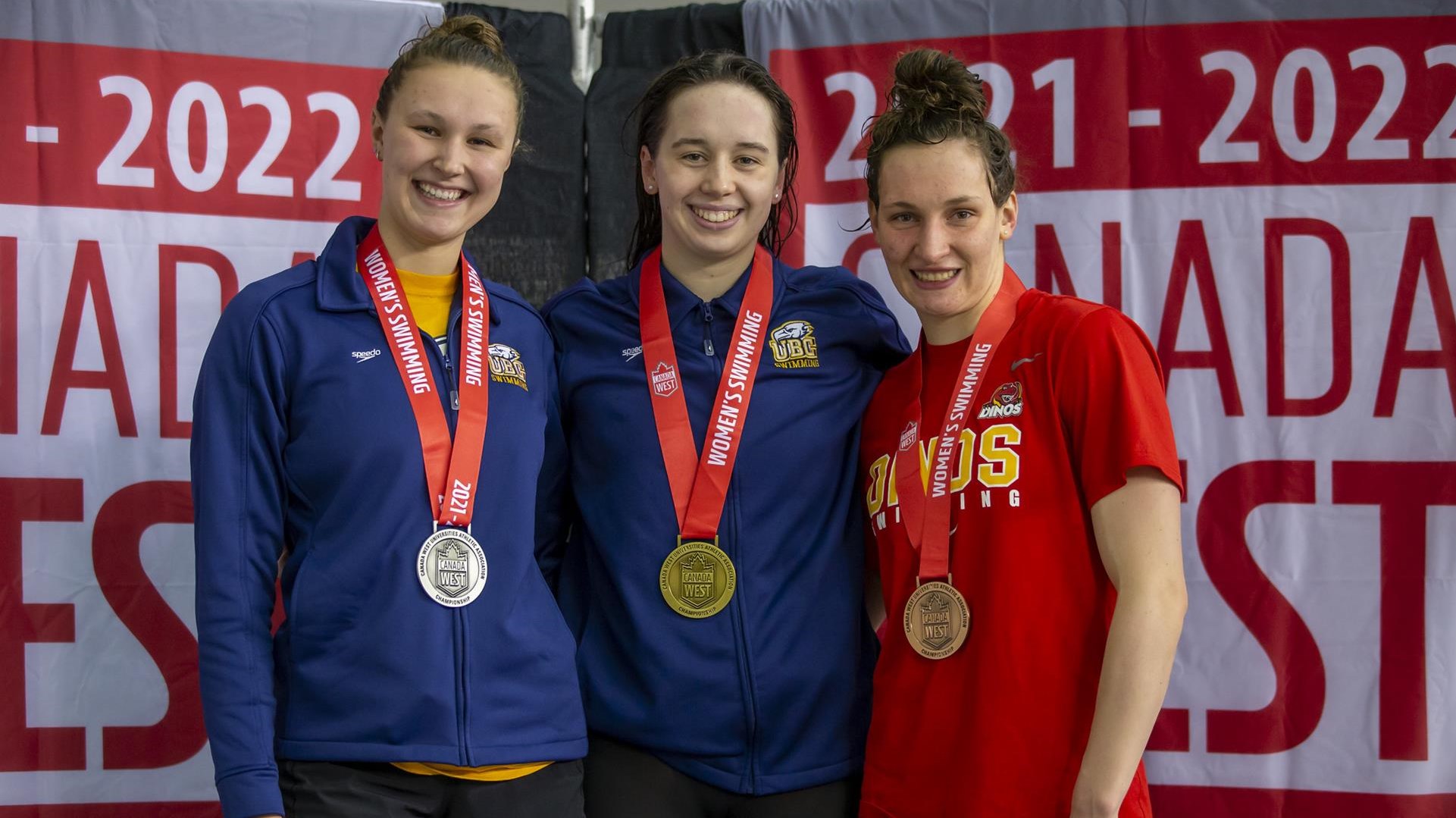 This motivation leant itself to several podium finishes, including a gold medal for Josie Field who in the 200m butterfly final — an infamously difficult race that the butterfly specialist makes look easy — flew past her competition finishing four seconds ahead of teammate Chantel Jeffrey, who secured silver.

The women’s squad rounded off their weekend with a strong finish in the 400m freestyle Sunday, with Emma O’Croinin earning her seventh medal of the weekend, followed by teammates Rosalie Davidson in third, Jeffrey in fourth, and Field in fifth. O’Croinin was also named Female Rookie of the Year.

“I just went to the meet wanting to get as many points as I could for the team and ... coming away with that award is just an added bonus,” O’Cronin said. “I’m definitely honoured to be recognized that way.”

Even as the semester comes to a close, T-Birds will continue their championship pursuits as the U Sports Championships approach. Heading into the championships, the men’s team opens the national rankings in first, with the women sitting in second, only 21 points behind the T-Birds’ rival, Calgary.

Migneault said of the men’s team, “I feel confident that we have a good chance of winning U Sports. But it won't be as easy as [Canada West]”, adding that they would still go into the national meet with their “guard up.”

As for the women, O’Croinin added, “We’re definitely looking at our performances at [Canada West] and seeing what we can improve on ... [We’re] hoping to put our best foot forward there.”

The national championship, which brings together all Canadian university teams, will take place from February 25–27, 2022 at Université Laval.