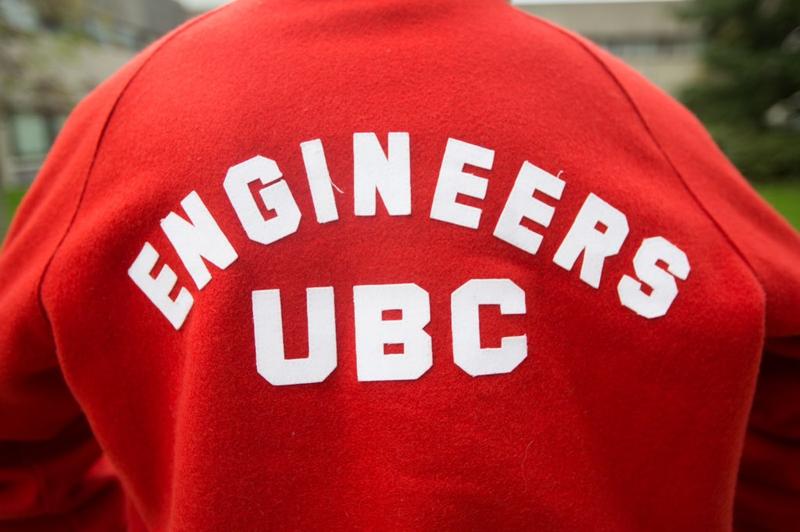 Justin Chan had some interesting thoughts on life and philosophy. File photo Carter Brundage / The Ubyssey

Have you noticed a little extra red on campus this week? It's E-Week, and UBC engineers are making sure their presence is felt. We caught up with five T-Birds to find out what kind of impact engineering has on sports, which pranks they pull on their teammates and the best reasons to date an engineer.

1) What type of engineering are you studying and what kind of project would you be most interested in working on?

AHP: Electrical engineering. I am most interested in working with next generation technologies to design new and interesting products to enhance people’s lives.

CR: I am planning to specialize in computing engineering and build software for car design.

JH: I'm in second-year civil engineering. I am especially interested in geotechnical and hydrotechnical engineering, and would like to work on hydroelectric dams.

GJ: Chemical and biological engineering. I'd love to work in a biomedical research lab, specifically pertaining to genetics or immunology. One day, I'll create the first genetically enhanced superhuman.

2) Describe an engineering feat that had a major impact on sport.

AHP: In the past 10 years or so the advances in composite materials such as carbon fibre has resulted in decreased weight and increased strength for a lot of sporting equipment.

CR: As a golf player, everything that touches our equipment has been designed by an engineer. The dimple of a golf ball had a major impact on the sport.

JH: Chairlifts are way better than hiking for skiing, and there's lots of engineering in those.

GJ: I've always been amazed at the mechanical design of equipment in sports like sledge hockey. Athletes who never thought they could play again, or ever, are given the gift of sport that we sometimes take for granted.

3) UBC engineers have quite the reputation of pulling pranks on campus. What's the craziest prank you've pulled on a teammate?

AHP: I’m pretty sure pranks are against the athletes code of conduct so I definitely don’t pull any …

CR: Turning the clubs up side down in a golf bag -- [makes it] not so easy to take them out.

JH: There's a ski company called Fischer that makes skis with holes in the tips. Those, plus zip ties, and you can probably figure out what happened.

4) If you had to perform the half time show at the Super Bowl, what song would you sing?

AHP: That I could sing is "Running To The Sea" by Röyksopp … but of artists who would be likely to play at a Mega bowl I’d have to say T Swift’s "I Knew You Were Trouble." I got the chorus and the goat sections down.

CR: "Drunk in Love" by Beyonce.

JH: To be honest, I thought "Work It Out" by Missy Elliott, and "I Kissed a Girl" by Katy Perry to be super, excellent choices. I'd probably just do a shot-for-shot remake of this year's halftime show.

GJ: Celine Dion's "It's All Coming Back To Me Now." That's a full six minutes of raw, emotional passion. Of course, you'd have to play the music video in the background for the full effect.

5) Valentine's Day is coming up. What's the best reason to date an engineer?

AHP: You’ll never have to worry about being the most socially awkward person at a party.

CR: You will not even bother arguing with us because you know you will always be wrong.

JH: I mean I like to think I'm funny. And we're good (or absolutely useless, it's really a toss-up) at helping with physics homework.

GJ: Brains and beauty -- what's not to love? Plus, there's nothing sexier than spouting off the laws of thermodynamics in bed because of the heat and energy accumulating in the system.

Check out last week’s edition of the T-Birds 5-on-5 series: Graceful Globetrotters.