Where there’s thunder: Women’s soccer needs to find their spark against UFV 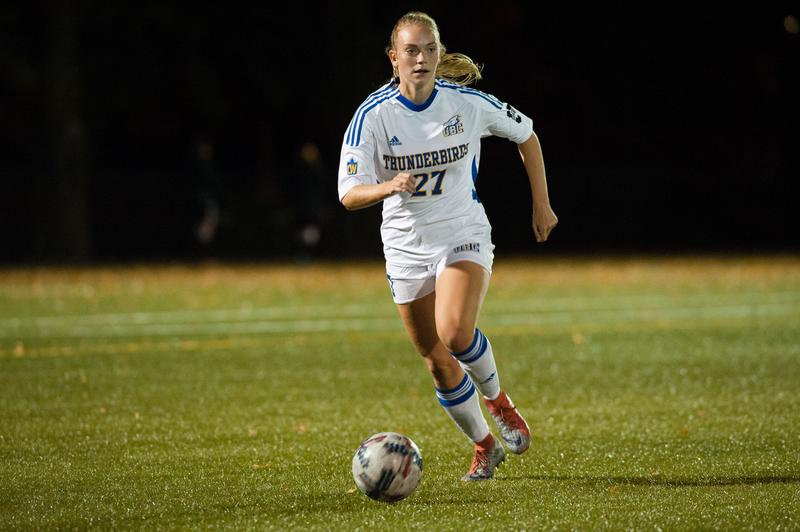 The last time the two teams met this season, the Thunderbirds dismantled the Cascades 3-1. Patrick Gillin

On Friday, October 20, the UBC women’s soccer team will go head-to-head against the University of the Fraser Valley Cascades (UFV) at Thunderbird Stadium.

The game looks like an easy win for the Thunderbirds.

The Cascades are coming off of a series of ties and losses and have a measly 4-4-4 record compared to the ’Bird’s 7-2-3. Their head-to-head record even points towards success — the last time the two teams met this season, the Thunderbirds dismantled the Cascades 3-1.

But the Cascades are on the cusp of seizing a playoff spot and with no space left in their season for mistakes, they will be fighting like hell for that spot. Probably a good idea not to underestimate them.

As it stands, the ’Birds have ticked off the first to-dos towards a successful season. They have already clinched their own playoff spot — and with two games to spare.

Even so, the T-Birds are coming out of a rough patch of their own. The last time the ’Birds were home, things looked rosier. Their worst was behind them — a loss to the University of Victoria (UVic) Vikes in their season opener. They had also faced the University of Northern British Columbia Timberwolves (UNBC) and the Vikes, tying against both teams.

Their next games on the road saw the Thunderbirds losing and drawing against the University of Alberta Pandas and the Mount Royal University Cougars respectively. In both games, UBC conceded more goals in each game than any other individual game all season — they haven’t won a game since September.

No cause for alarm though, as the ’Birds are still a formidable team. The Canada West’s offensive leaderboard is littered with UBC stars — including fifth-year striker Jasmin Dhanda, who has scored the most goals in the league at 13, and Aman Shergill who tops the league with eight assists.

The T-Birds also managed to get through one of the more competitive leagues in the country, one where the top half of the league shuffled amongst themselves like a game of musical chairs.

Prediction? The ’Birds will be championship contenders again this season.

The ’Birds don’t need to prove anything — they are arguably one of the best Canadian university teams. But with their recent history, and in order to gain the right momentum before the playoffs, they need a convincing win against the Cascades. They need to finish off their regular season with a bang.

For UBC, Thunderstruck is a chance to send a strong symbolic message — to their fans and to the other teams in the league — that despite their faring in their past few games, they are a team to be worried about.

UBC will be facing the University of the Fraser Valley Cascades on Friday October 20 at 6:30 p.m. at Thunderbird Stadium.