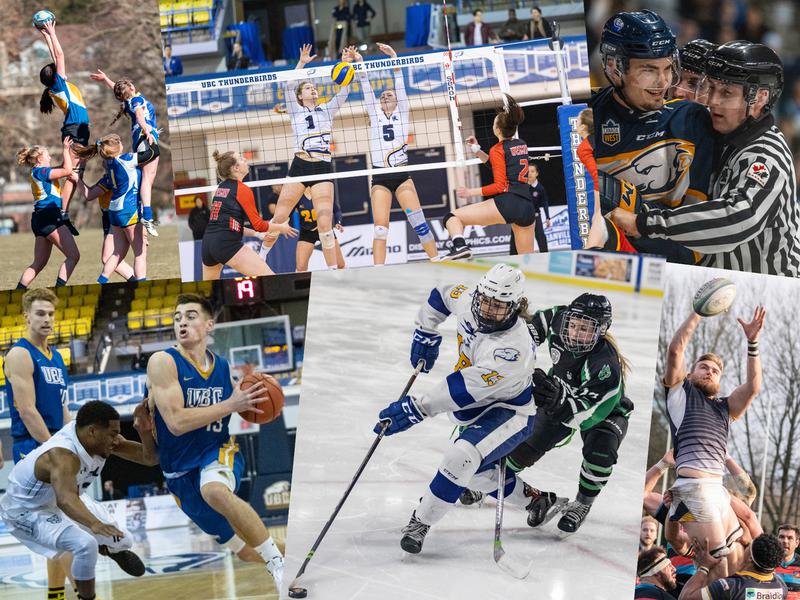 It’s been a hot minute (more like a year or two), but welcome back to Weekend Rundown, your place to stay up to date with all of the different Thunderbirds teams!

T-Birds finished with a strong 4-0 against the UNBC Timberwolves in their home opener this past week after dominating their season opener last week against the Thompson Rivers WolfPack.

It was a tough start for T-Birds, getting their 16 of 17 shots turned away by the fifth-year T-Wolves goalkeeper Brooke Molby.

Katalin Tolnai answered in the 89th minute after receiving Ava Alexander’s assist on the left side of the 18-yard box and finished with 1-0 on Friday.

The performance of these rookies this past week looked very promising as they started the season for another National Championships title.

“[T]o see six or seven rookies on the field to end the game shows a lot of class and trust with them as well and to find that goal for our team shows the depth we have as a program," said UBC women’s soccer Head Coach Jesse Symons after Friday's game.

The T-Birds came back stronger offensively the next day with 3-0. Tess McCrae, finished the assist from Ella Nuttall-Smith at the start of the game.

Dani Mosher earned a penalty in the 50th minute and Danielle Steer made a successful penalty kick adding to UBC’s advantage of 2-0. Steer scored another in the 54th minute from another assist from Mosher.

Celebration of Life Ceremony for the former head coach of both UBC men’s and women’s soccer teams Dick Mosher and Dani Mosher added to the celebration with a stellar second half.

T-Birds will face the UFV Cascades at Matsqui Recreation Centre in Abbotsford on Friday and Sunday. 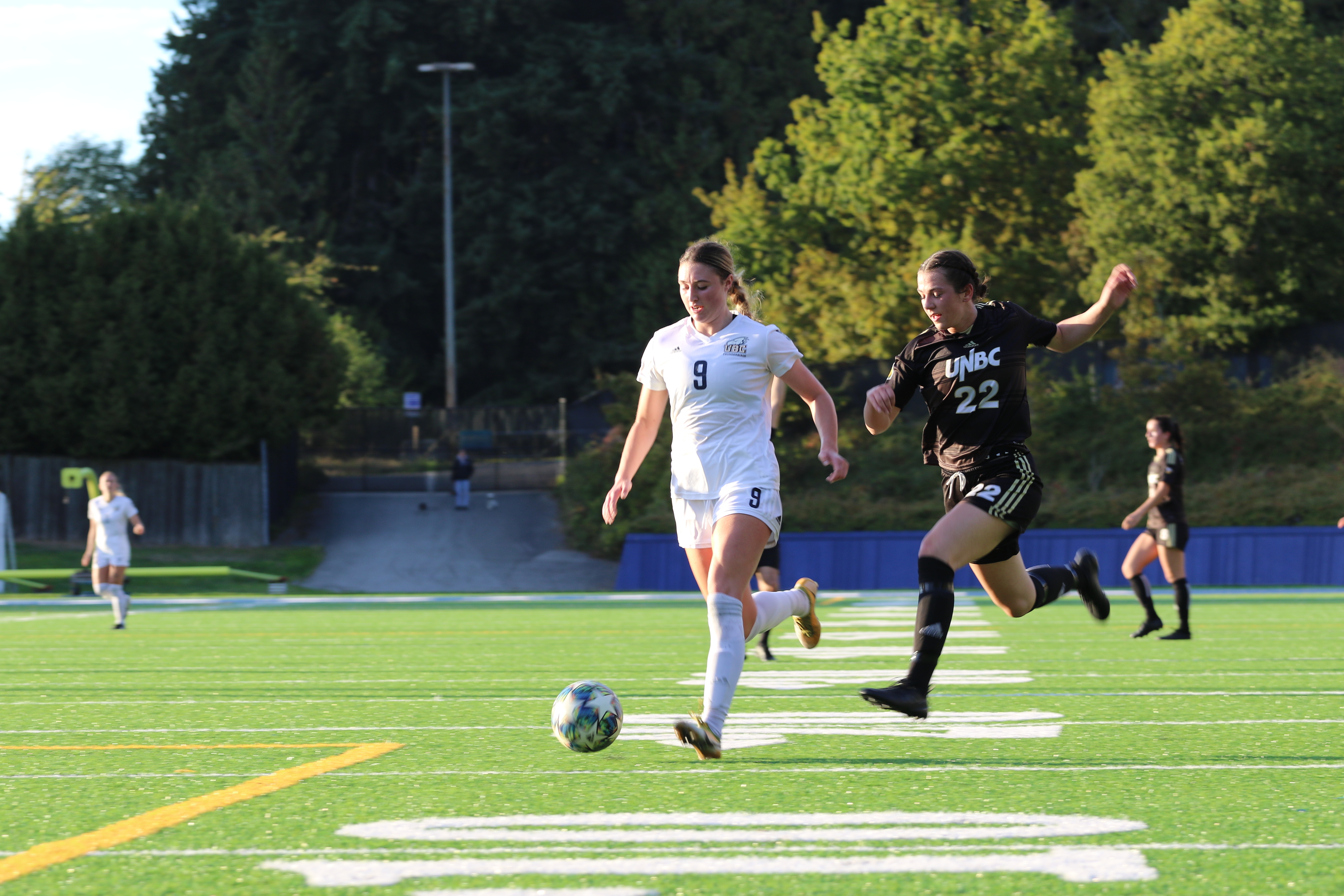 Steer scored another in the 54th minute from another assist from Mosher. Stanley Lee

T-Birds closed off the back-to-back weekend games against the UNBC Timberwolves with a tight victory and a 3-3 draw at the Thunderbird Stadium this past weekend.

After repeating two 1-1 draws against Thompson Rivers WolfPack and receiving a bye week, T-Birds closed the night with a win this past Friday.

Mitch Piraux was fouled ten minutes before the end of the first half along with a free kick. With Nick Fussell’s free kick, Tristan Nkoghe headed his first goal of the season. Nkoghe is a transfer from the University of New Brunswick and this goal also marks his first goal under T-Birds nest.

There were many possessions being traded back and forth though. “It was not our best game … Giving away possession [too] often and too easy, not connecting passes, but tomorrow is another game,” said UBC men’s soccer Head Coach Mike Mosher.

However, the T-Birds finished the next day with the score at 3-3. The T-Birds started strong with 3-0 before the halftime whistle.

At the start of the second half, the T-wolves turned the table with three straight goals and the T-Birds finished with a tie game on Saturday.

T-Birds will be facing the Cascades in Abbotsford on Friday and Saturday. 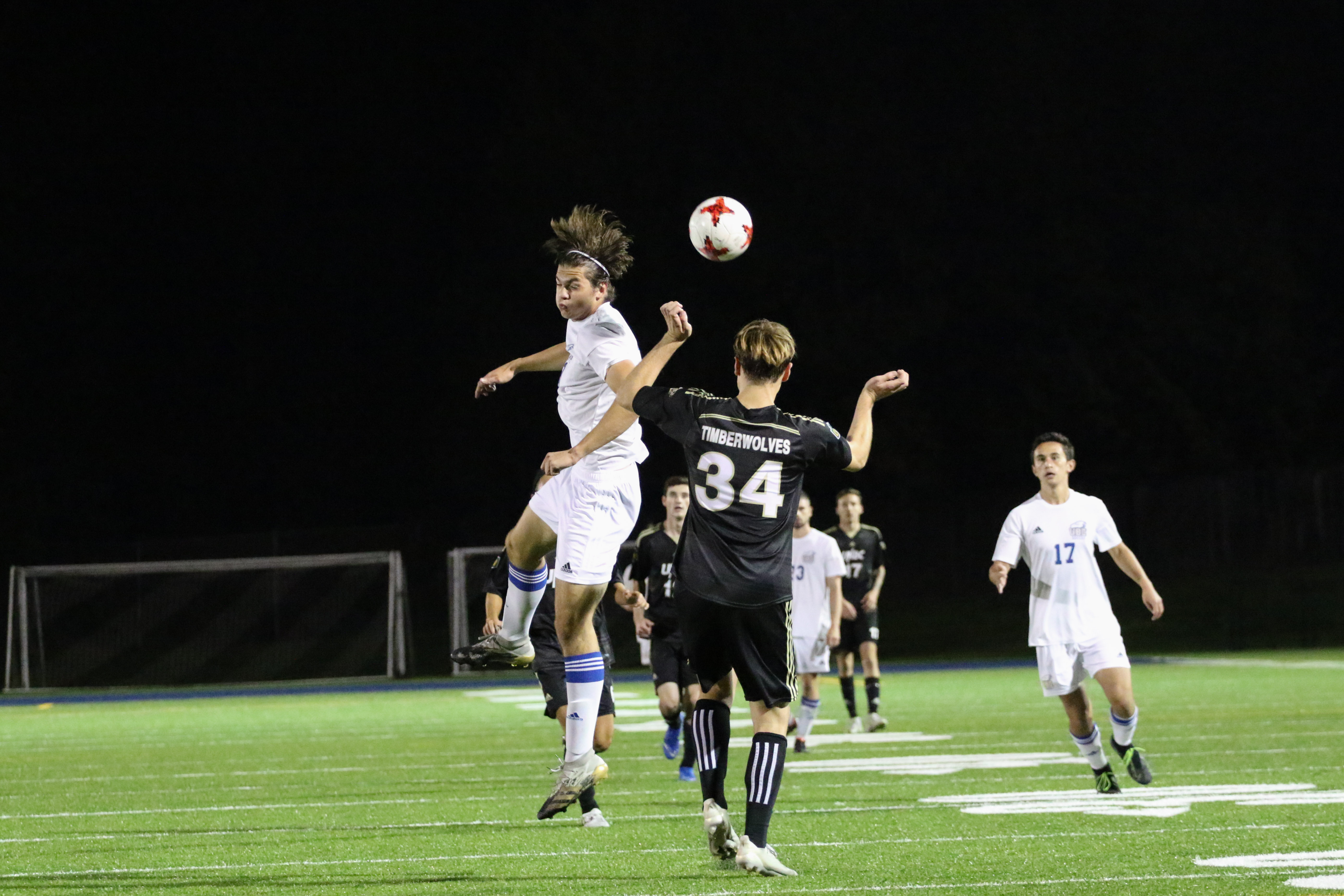 T-Birds will be facing the Cascades in Abbotsford on Friday and Saturday. Stanley Lee

The T-Birds had a stellar home opener win against the University of Alberta Pandas.

An exceptional three-try performance from UBC’s fly-half Savannah Bauder along with four conversions added to the excitement in the crowds, including two tries from Emma Feldinger and Piper Logan as well one try each from Madison Gold, Shoshana Seumanutafa and Olivia Sarabura.

Even with this impressive performance, UBC women’s rugby Head Coach Dean Murten believes there is still homework for the team as they start their season.

“We had the momentum … but there was a spell of about ten minutes where we lost that momentum and it’s something we have to address,” said Murten.

With a strong 60-5 finish for T-Birds, the team is not 2-0 in their season. “It’s amazing to think we’re actually back doing this,” said Murten.

“We thank everybody for coming out. All the donors and supporters have kept with us over the last 18 months and to see them out there now with the fans and parents, it was just a wonderful experience. To top it off with a great bit of sunshine … all in all a great day.”

The T-Birds hope to carry their winning momentum as they host the University of Calgary Dinos this Sunday. 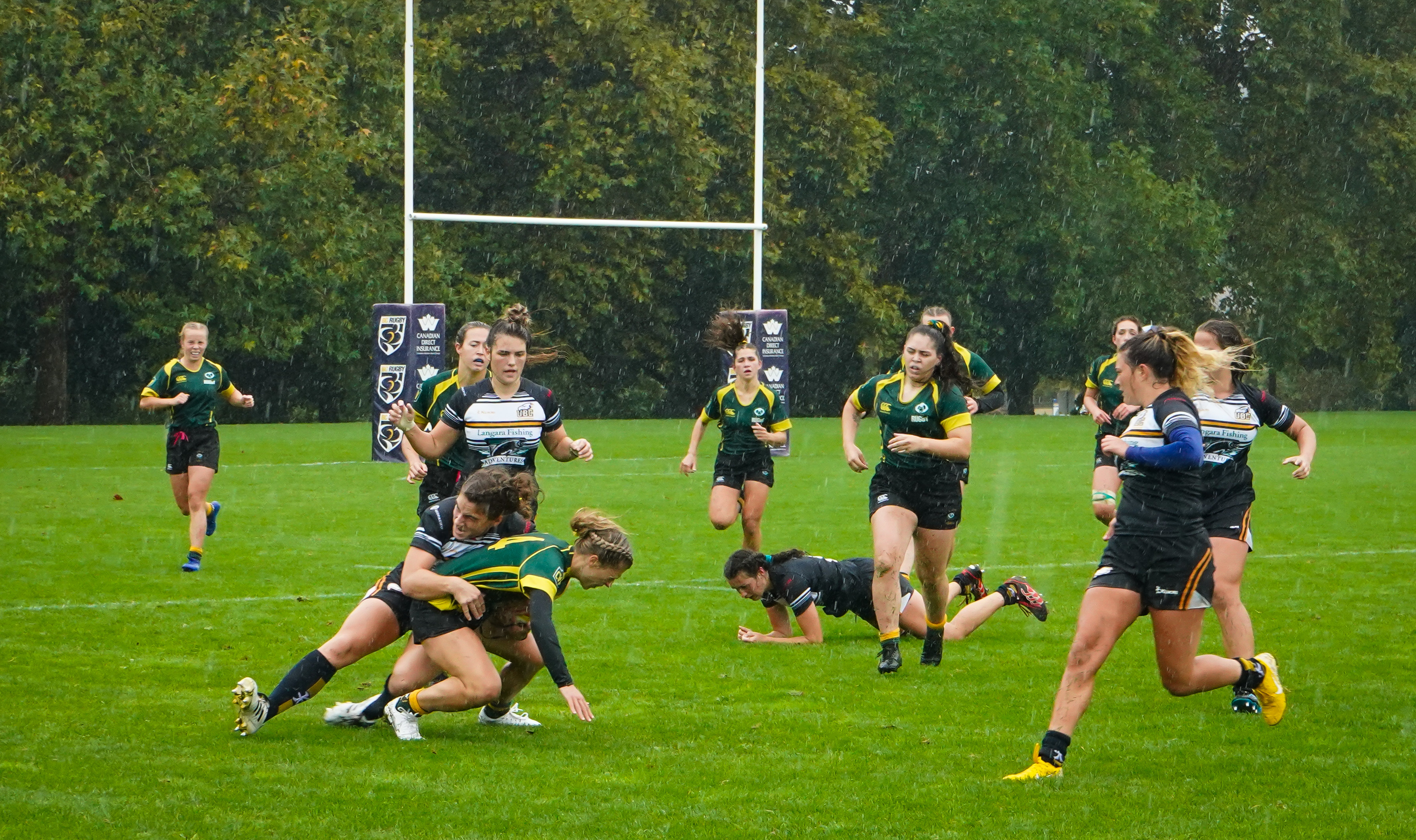 The T-Birds hope to carry their winning momentum as they host the University of Calgary Dinos this Sunday. File Elizabeth Wang

The T-Birds had their first game in the new Coastal Cup, which is a new league in British Columbia, specifically for high performance men’s rugby. This league includes regional teams as well as three university teams, which are UBC, Trinity Western and Victoria.

The T-Birds had a fast lead with 8-0, a score from a penalty kick and Evan Norris’s try in the first five minutes. Then they ended the half at 20-8 and continued the momentum, bringing home a 34-13 win which included a Connor Byron try in the second half as well as from Jacob Bossi, Dillon Hamilton and Flynn Heyes.

T-Birds hope to carry this momentum on Sunday as they take on the Vancouver Wave in the Coastal Cup.

T-Birds will also be hosting Canadian University Men’s Rugby Championships from November 23 to 27.

“There is such a robust rugby culture throughout the Lower Mainland which has no doubt impacted our strong Thunderbirds tradition of excellence at UBC,” said the Managing Director of UBC Athletics and Recreation Kavie Toor.

“We look forward to welcoming the best rugby teams from across the country and showcasing their premier event to our tremendously supportive alumni and valued community.” 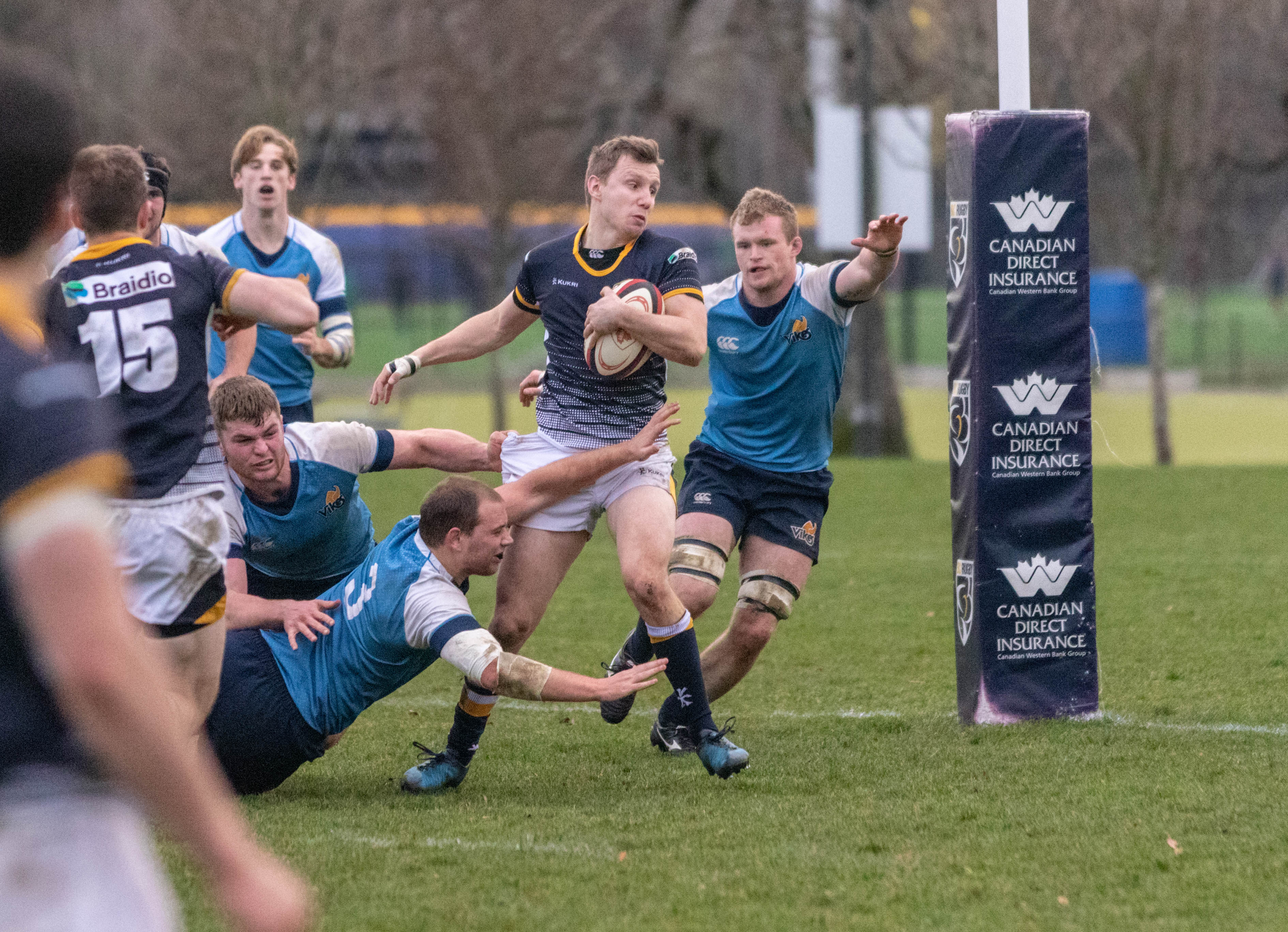 T-Birds hope to carry this momentum on Sunday as they take on the Vancouver Wave in the Coastal Cup. File Salomon Micko Benrimoh

T-Birds had their season opening against the University of Alberta Golden Bears, which marked as their first game in two years since the pandemic.

The rookies showed a phenomenal start to their season though. UBC rookie quarterback Garrett Rooker finished the game with 372 yards passing going 32-for-45 along with the pair of touchdowns and one interception.

“It’s not like he’s a first year quarterback thrown into a veteran group, he’s in charge of a bunch of young men, there’s youth all over that offence, it was a pretty solid first outing,” said UBC football head coach Blake Nill.

UBC rookie receiver Jason Soriano pulled through with a touchdown from one of the two Rooker passes in the third quarter.

It was a slow and rough start for the T-Birds, especially with the penalties that the Bears really took advantage of.

“Give Alberta all the credit in the world, I’m not taking anything away from what they accomplished … but the penalties just killed us, you’re not going to win football games with those penalties,” said Nill.

Though disappointed due to some of the exceptional individual performances, T-Birds hope to fight back in their home opener on Friday against the Saskatchewan Huskies at Thunderbird Stadium. 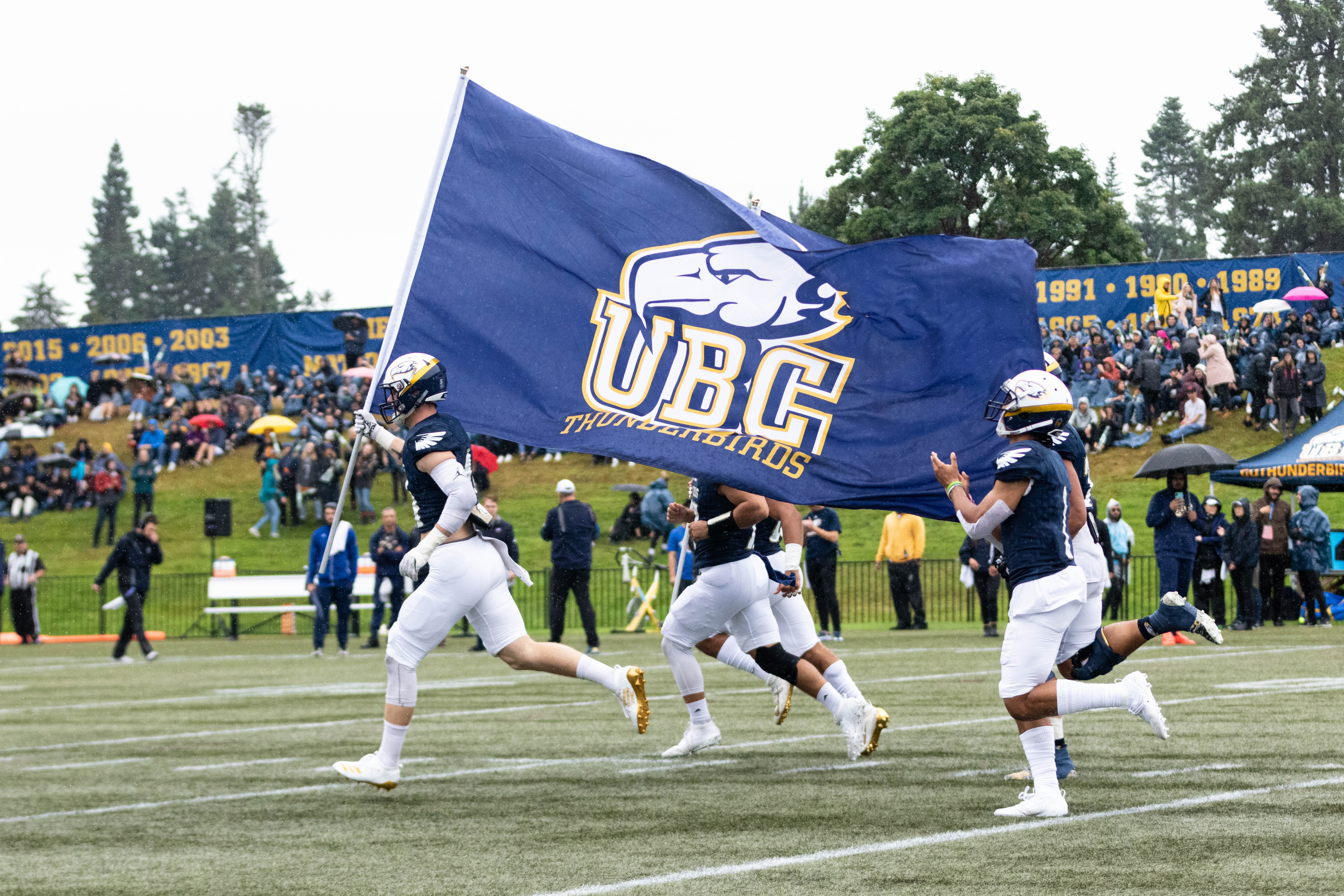 T-Birds hope to fight back in their home opener on Friday against the Saskatchewan Huskies at Thunderbird Stadium. File Salomon Micko Benrimoh

Men’s hockey had brought home 3-2 win against the Trinity Western University Spartans, which is their second exhibition game of the Captains Cup.

Scott Atkinson scored the go-ahead goal halfway through the third period, completing the comeback for the Thunderbirds.

After a lackluster warmup from both teams, it was UBC who came out flying. North Vancouver native Liam Kindree threw the first hit of the game 15 seconds in.

Not long after, a tremendous block in the defensive zone by Quinn Benjafield saw UBC take it the other way with purpose.

However, a careless no-look pass in the offensive zone resulted in a 2 on 1 for the Spartans the other way. Brandon Potomak looked off his teammate and roofed it over Ethan Anders glove, getting TWU on the board first.

The second period saw the T-Birds open with a strong penalty kill, keeping the puck out of their zone almost entirely.

Despite multiple golden chances, UBC couldn’t beat the Spartan’s Isaac Labelle, who took over for Talor Joseph halfway through the game. Heading into the second intermission, UBC found themselves down by two and desperately needing a spark.

“[The line of] Scott Atkinson, Chris Douglas, and Jack Wismer were doing a lot of good things out there. They were having a great game because they were just playing simple, getting to the net, and working their butts off,” said UBC men’s hockey head coach Sven Butenschön.

Just over one minute into the final frame, Vancouver Giants alumni Cyle McNabb squeaked one past Spartan’s goaltender Labelle to spark what would be a dominant period for the T-Birds.

Three minutes after the game was tied, Atkinson scored the go-ahead goal, pouncing on a bad rebound in front of the net. It would end up being the game winner, as UBC’s defense controlled the remaining ten minutes of the game.

UBC is now 2-0 in the Captains Cup Tournament. With the Vancouver Island University Mariners coming to town on Friday, the T-Birds will look to remain undefeated. 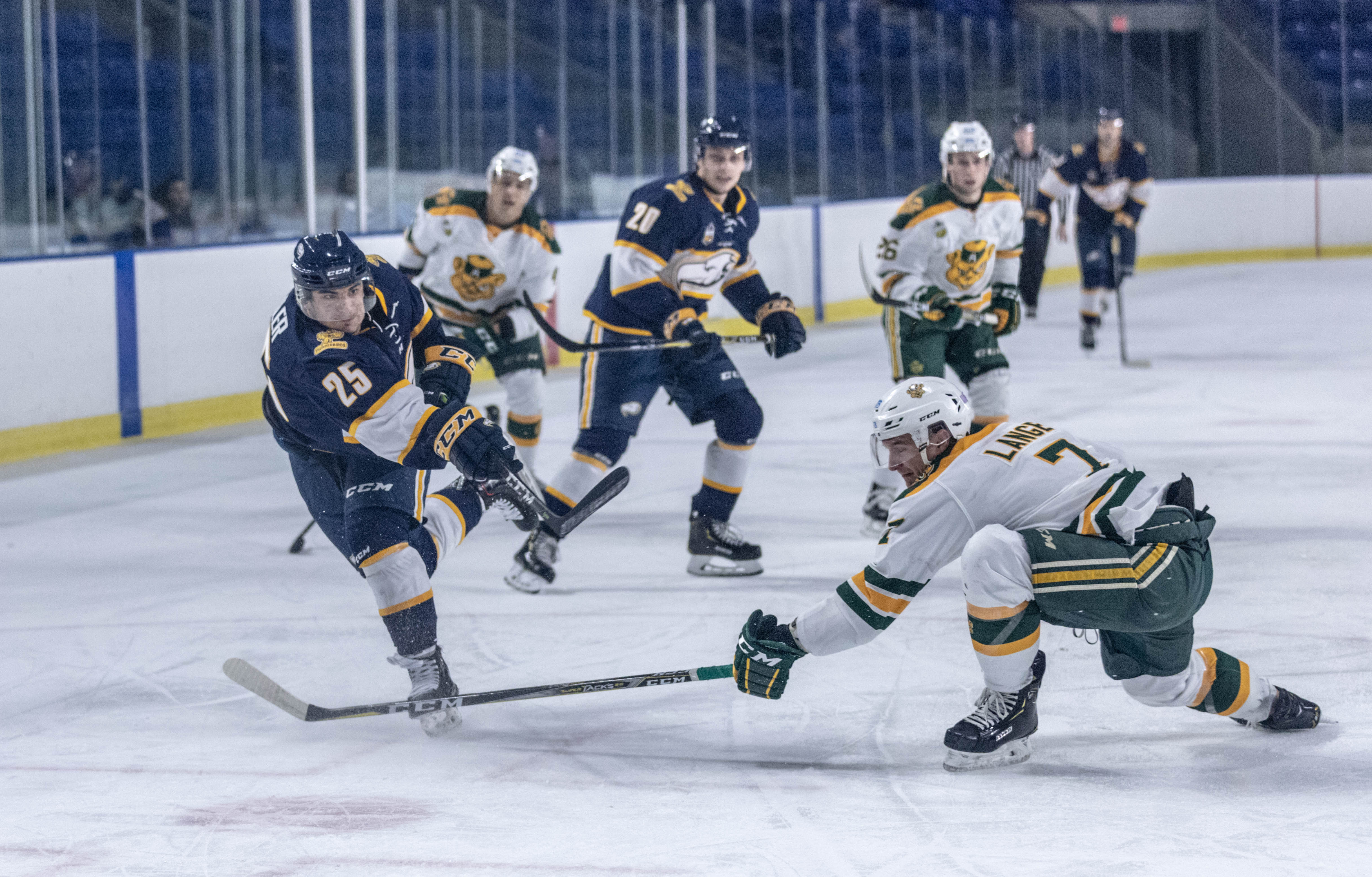 With the Vancouver Island University Mariners coming to town on Friday, the T-Birds will look to remain undefeated. File Salomon Micko Benrimoh