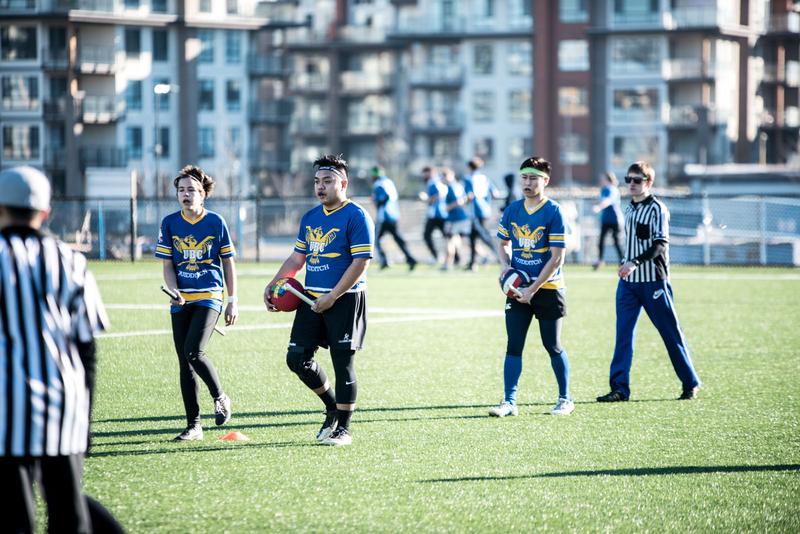 UBC takes a break in a hard fought match on Saturday.

On January 9, a quidditch tournament, dubbed the 6ix Oh Four Classic in an attempt to make a witty Drake pun, took place at University Hill Secondary School just off of campus. UBC’s two teams — University of British Columbia Quidditch Club (UBCQC) and the British Columbia Quidditch Club (BCQC) — hosted five other teams from Washington state and across British Columbia. With an odd number of seven teams participating in the event, tournament director Rachel Ralph and her organizers decided to go with a more foreign Swiss-style tournament format that is based heavily on a win-loss record. There is no championship game. Instead, the team with the best record is crowned the championship.

The schedule Ralph and her organizers had laid out matched both UBCQC and BCQC against tough first opponents. As coach of the less-experienced BCQC, I knew we had to come out aggressively if we were to get by the Seattle-based Emerald City Admirals. However, the Admirals’ solid play proved too much to handle for our club as they jumped out to an alarming 80 point lead. Unlikely to claw ourselves back into snitch range, seeker Gillian Savage went for the suicide catch and we ended up losing a hard-fought game by a score of 100-50. Our chaser captain Cameron Drury believed that size was a contributing factor to our loss. 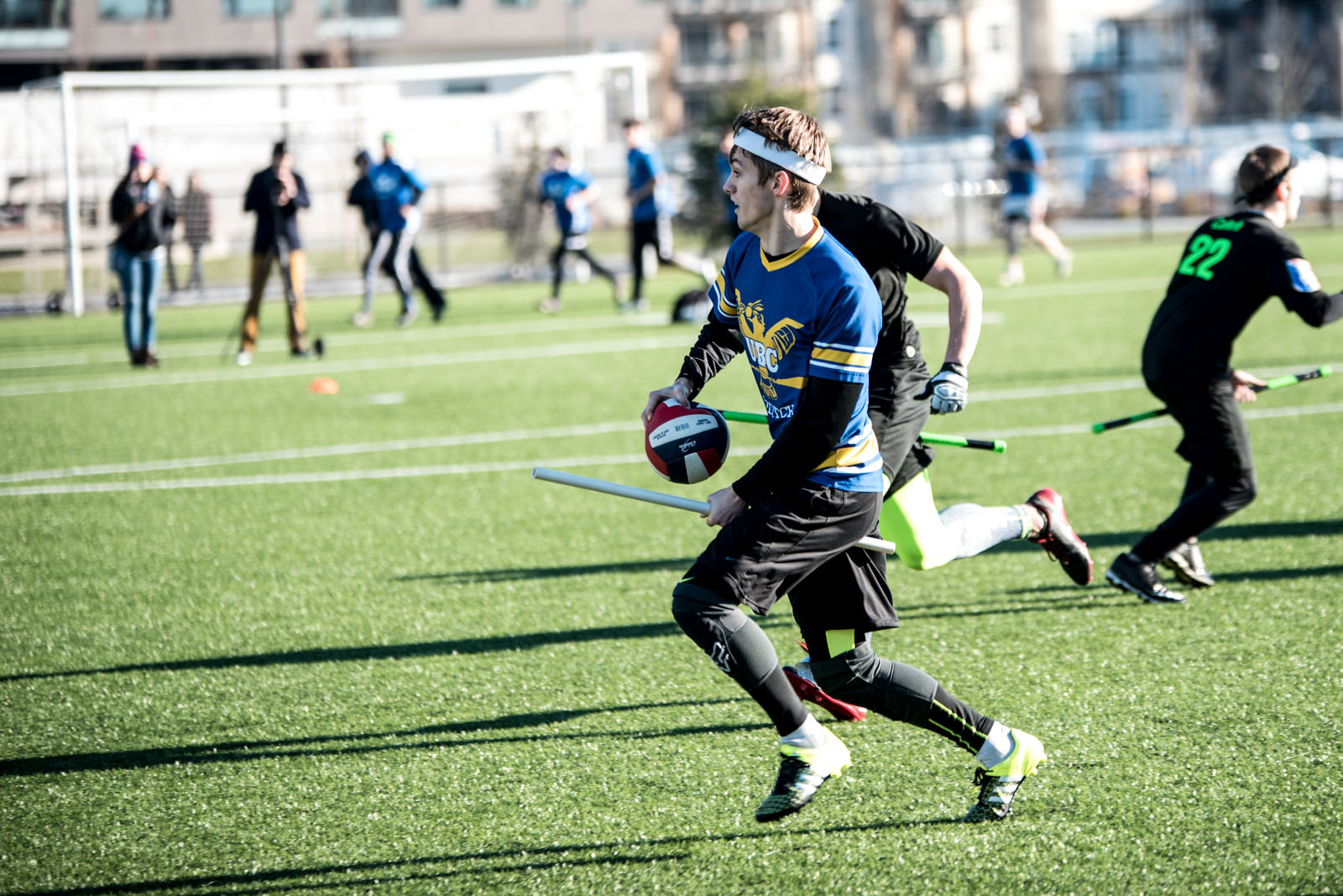 “We started off playing a tough team that we haven’t played before with lots of big players,” said Drury. “We don’t have size on our team, so there’s a challenge there.”

UBC’s first opponent was the high-flying Rain City Raptors from Bellingham. The team was at the top of the Northwest Regional standings and were playing dominantly against UBC, scoring 12 goals and catching the snitch in a 150-60 victory. After the loss, UBC beater captain Brandon Rivas emphasized to me how tough it will be to get by the Raptors in the regional championships.

After the disappointing loss against the Raptors, UBC turned their attention to an inter-squad matchup against my team. Fresh off a victory against the University of Victoria, we were determined to stick it to our “friends,” but simply could not match the aggressive style of play UBCQC played. In addition, we had sustained numerous injuries that left us shorthanded and unable to play to the best of our ability. Outnumbered and outmatched, we ended losing this “friendly” by a score of 190-40. 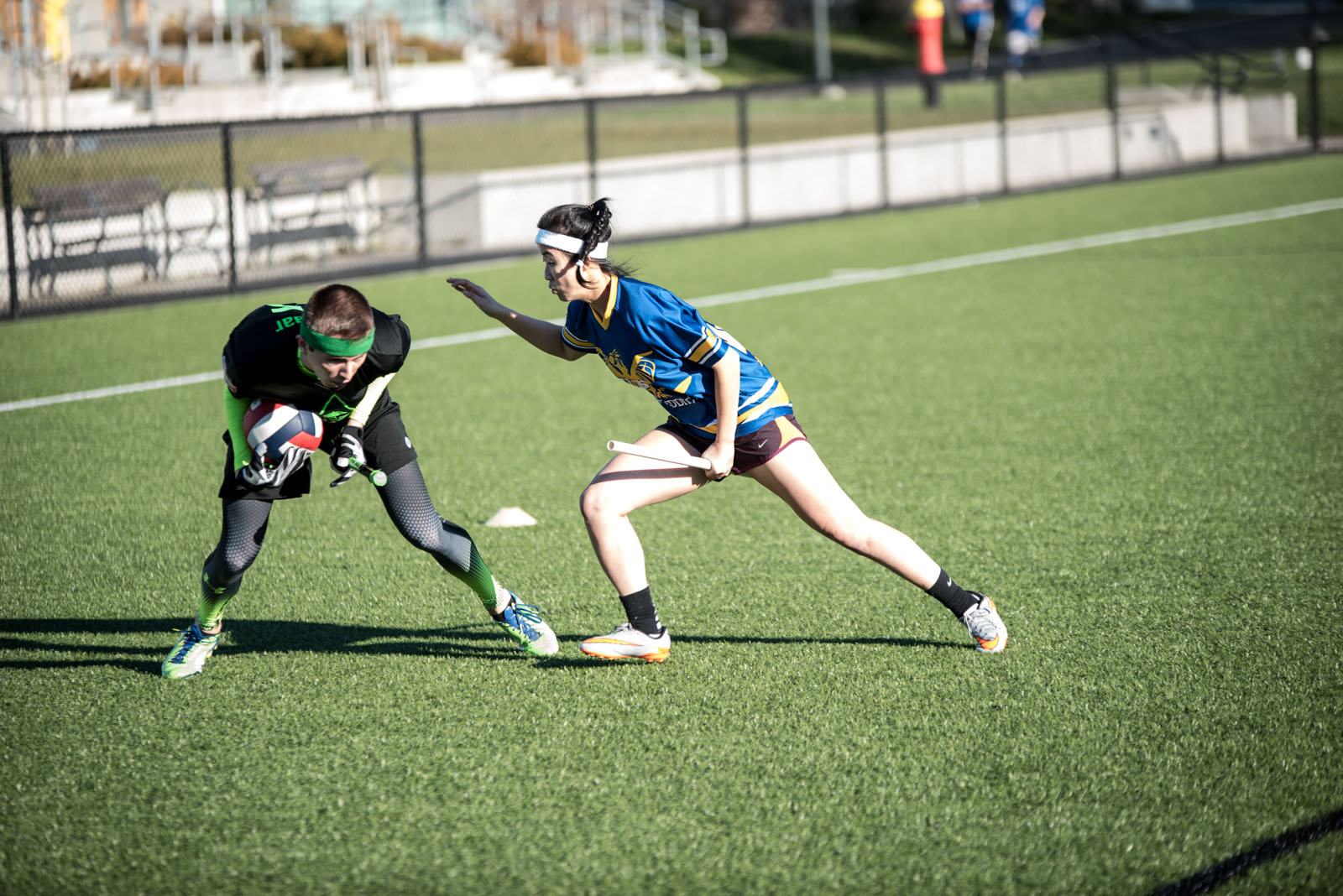 After UBCQC comfortably took care of the Vancouver Vipertooths with the injury-riddle BCQC nursing bruises on the sidelines, my injury-struck team took on cross-town rivals Simon Fraser University. After going down 50-40 on the scoreboard, a dramatic snitch catch by Lachlin Robertson would snatch victory from the jaws of defeat.

“I was really relieved because I didn’t let down the team,” said Robertson after the win. “I was also shocked. I kind of always get shocked when I catch it sometimes, so [I was] relieved, shocked and happy.”

The win levelled our record at 2-2, but that was short-lived as we would eventually fall to 2-3 following a loss in our final game to the tournament winners, the Rain City Raptors. Although we did not play to our potential that day, our chaser captain shared some positives from the experience with me after the match.

“I definitely know some of our better chasers are only getting better,” said Drury. “Justin [Kim], our 6-foot-4 player, is really getting better. Brooklynn [Fekete] ... was by the hoops today catching passes and actually scoring whereas in the past she had a little bit of trouble sealing it and getting the goals. There’s been some improvement, but we still got a long ways to go to actually be playing the fundamentals at a level I think would be better.”

The Rain City Raptors earned first place in the tournament with a perfect 4-0 record. UBCQC won their last game against the Admirals to finish 3-1, enough to capture second place. UBCQC coach Patrick Fuller was disappointed that the Raptors managed to edge them, but admitted his team had also improved in some ways.

“Although we didn't put up the results I was hoping for, I think we played very well this tournament,” said Fuller. “We have been trying to move away from the aggressive hero ball style that we have grown accustomed to and work more towards a quicker game with a lot more passing. Taking second isn't necessarily bad, I just wish we could have beaten the strongest team there.”

With the 6ix Oh Four Classic now behind us, our two teams will turn our attention to the Subdued Excitement Showdown — a tournament in Bellingham on the January 23. Our teams will hope that the tournament will prepare us for the Northwest Regional Championships on February 6.

Matt Langmuir is a coach and player for the BCQC team.