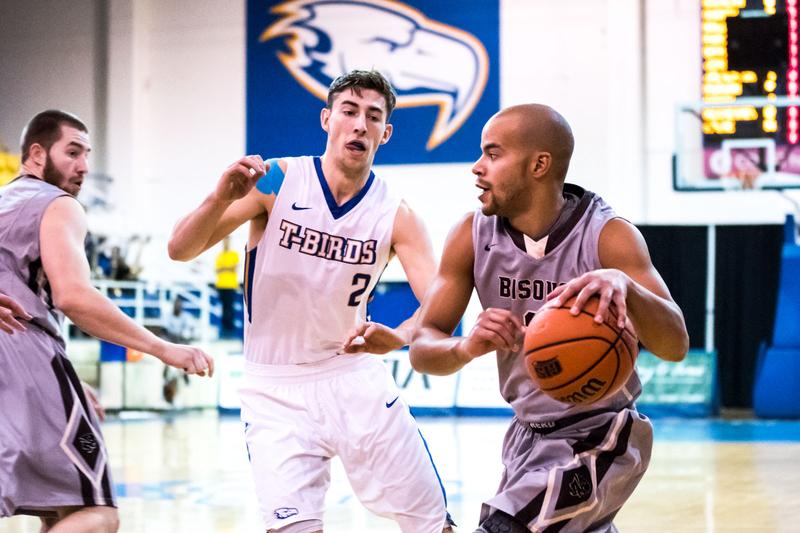 The Thunderbirds are on a winning streak and sitting on a comfortable 4-0 record in the early stage of the season.

Coming off a 96-89 win against the University of Manitoba Bisons on Friday night, they were expected to cruise to another win against the Bisons again on Saturday. However, the rematch was not an easy breeze for the ’Birds, which makes their 75-72 win seem even sweeter after a hard-fought battle filled with fouls.

UBC forward Conor Morgan won the tip-off for the ’Birds and his teammate Patrick Simon ran down the floor, drew a foul and proceeded to score the first point in the game. Both teams played air-tight defence from the get go and neither could find the flow to score points like they did in the first game. The game was tied at 12 points each at the end of the first quarter.

The second quarter was more or less the same story with both teams committing foul after foul. Neither team seemed able to score field goals. Due to a Bisons surge later in the quarter, the Bisons established a seven-point lead. The ’Birds were also down one man due to two technical fouls on A.J. Holloway.

“In the first half, it was a bit frustrating because we weren’t moving the ball,” said Morgan. “But we did that in the second half, so we are good.”

Bisons guard A.J. Basi’s turnaround floater started the second half. Both teams played physical defence and showed great effort which stirred up waves of shouting and cheering from their fans. The Bisons continued their hot offensive streak and forced the ’Birds to crank up a notch on defence to play full-court press. The T-Birds changed their strategy after a timeout to put up a smaller lineup and they retook the lead at 54-50 by the end of the third quarter.

“The guys really held onto the basketball and played quite selfish basketball,” said UBC head coach Kevin Hanson. “So we just went with a different lineup out there. With a little bit of small ball, we played a different system [and] tried to get some spacing. Guys did a much better job at spacing and getting penetration that really helped us. It’s a good win for us.”

Bisons’ Keith Omoerah scored a reverse layup to open the final quarter. The ’Birds responded soon after, as fifth-year guard Jordan Jensen-Whyte scored four points in a row. The Bisons kept up with the ’Birds and got the game back within their reach at 65-62. Morgan checked back in for the ’Birds and scored a basket instantly. Basi drilled a three pointer to answer it back. The ’Birds put the ball into Jensen-Whyte's hands in the final minutes, and he scored a layup and a foul shot to put the Thunderbirds back in the lead. A series of staunch defensive possessions secured a win for UBC at 75-72.