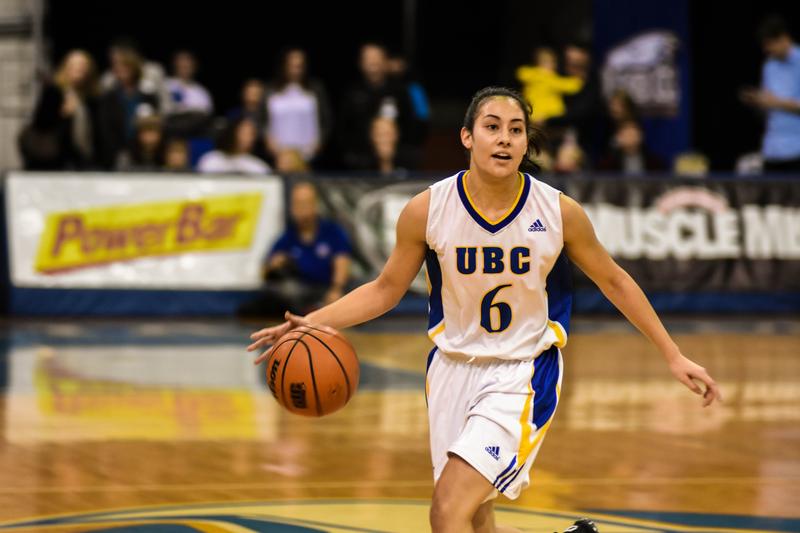 After beating the University of Victoria Vikes in Victoria, BC on Friday, November 25, women’s basketball played host the next day at home for a high-energy game at the War Memorial Gym.

UBC were looking comfortable for most of the first half and headed into halftime with a 23-point lead. Despite this, the Vikes forced double overtime, but eventually ended up on the losing side to the home team.

Victoria’s comeback was extremely special. Not once did they give up — they fought until the very last second. It takes a certain team and special commitment to do something like that. The Vikes were brilliant, but didn’t play consistently throughout the game, especially in the first half which saw them eventually on the losing side.

Victoria won jump-ball and were extra tight on defense to start things with. Still, it was a sluggish first quarter for both teams. Victoria committed a lot of fouls towards the end, which helped UBC end up with a three-point lead at 15-12.

The next quarter, the Vikes were completely demolished by UBC. This was the ’Birds' strongest quarter in the game, scoring 32 points. Second-year guard Maddison Penn started heating up and made her presence felt throughout the whole game. She finished with 36 points, 10 rebounds and three steals while playing for 32 minutes, and made some clutch free throws to seal the game for UBC towards the end.

At the start of the quarter, Victoria constantly attempted three-pointers and were consistently missing them. They hadn’t scored for the first four minutes of the quarter. Then, with under four minutes remaining till halftime, Victoria began their surreal comeback. Although whenever Victoria did score, Penn would come up with an answer of her own. The score at halftime was 47-24 in favour of UBC.

After the break, the Vikes were a completely different team out on the floor. They got their fighting spirit back and put up back-to-back buckets in quick succession to slowly narrow UBC’s mammoth lead. The teams switched identities — it was UBC this time who hadn’t scored for the first four minutes in the quarter. And with just under five minutes remaining, the Vikes cut UBC’s lead to just 10 points. The ’Birds responded well after this and found their rhythm once again, finishing the quarter 60-45. Victoria outscored UBC 21-13.

The ’Birds were up 15 points heading into the fourth quarter, but Victoria managed to force overtime — not once, but twice.

It was entirely the Vikes' show until the end of regulation from here. With five minutes remaining, Victoria narrowed UBC’s lead to 10 points once more. With 38 seconds left, the game was tied 69-69. The match went into its first overtime.

For the first minute and twenty seconds, no team had scored. That’s when Maddison Penn decided to take matters into her own hands, and got UBC the lead at 75-71 with under three minutes left. The Vikes were not ready to go back with a loss and ended up tying the game 77-77 with under four seconds remaining. The game then went into its second overtime.

UBC was leading by two points 80-78, with just over three minutes remaining. Victoria was very much in the game until that point. The ’Birds, however, were determined to get their sixth win of the season, which led them on a scoring run that eventually saw the end of the game, 93-85.

The ’Birds were better in the free-throw department, converting 79.1 per cent of their chances, while Victoria made 71.9 per cent of their attempts. UBC had more second-chance points with 17 — while the Vikes had 10 — and had a more productive effort from their bench than Victoria did, with UBC’s bench scoring 20 points compared to Victoria’s 11. The Vikes did have more points in the paint at 30 whereas the ’Birds had 10, and more points off of turnovers at 20 while the ’Birds had 17.

It was a disappointing loss for Victoria on a back-to-back night. Both teams put everything they had on the court, but it was UBC that eventually got the win that evening.

The ’Birds will be facing the UBC Okanagan Heat at home in the War Memorial Gym on Friday, December 2 at 6 p.m. and on Saturday, December 3 at 5 p.m.