Weekend Rundown: Huskies stop the T-Birds from advancing to the Hardy Cup final 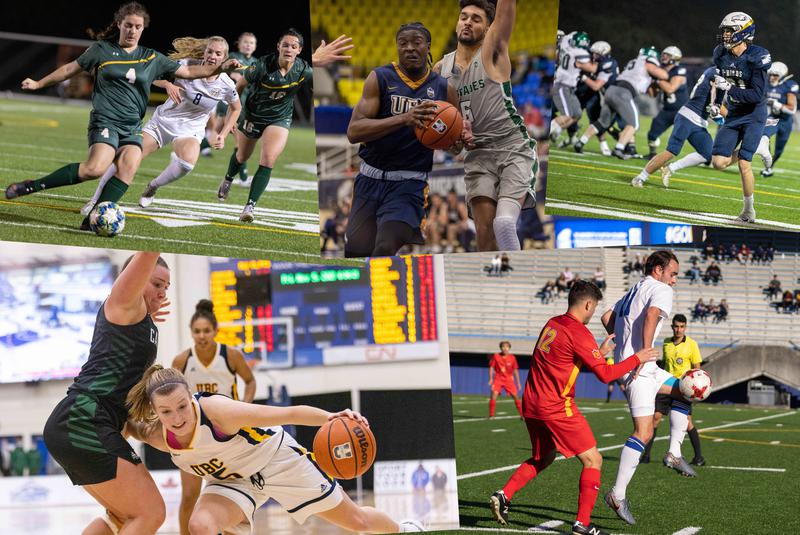 The T-Birds ended their season on Saturday after losing against the Saskatchewan Huskies. Diana Hong and Isabella Falsetti

After a nail-biter win against the University of Alberta Golden Bears to secure a place in the Hardy Cup semifinals, the T-Birds’ football team ended their season on Saturday after losing against the Saskatchewan Huskies.

The game was one of attrition from its outset, with neither team’s offence putting up more than one or two significant drives in the first two quarters.

Though Saskatchewan was the favourite to win entering this game, finishing first in Canada West with a 5-1 record, the 3-3 T-Birds’ defence played well, holding the Huskies to just 13 points in the first half.

UBC quarterback Garrett Rooker started off the Thunderbirds’ scoring with a one-yard stab into the Huskies’ end zone with 6:20 left to go before halftime. Consequently, the T-Birds finished the second quarter down by only three points.

However, following a scoreless third quarter that saw the UBC offence stifled on numerous attempts, UBC ultimately could not close the gap and take the lead against the Huskies.

T-Birds’ running-back Lucas Mastrodomenico’s fourth-quarter touchdown proved to be too little, too late for the T-Birds. The Huskies continued to score throughout the game, ending it 39-17 in favour of Saskatchewan.

This marks the end of season for the T-Birds as the Huskies advance to the Hardy Cup Final next week to play against the Manitoba Bisons.

This season was one of ups and downs for this young T-Birds team. After a rough start to their 2021 campaign, the T-Birds managed to find ways to steal games late and compete in a tight Canada West division.

While, needless to say, losing is disappointing, the poise and tenacity this T-Birds team showed this year is promising. Their efforts to topple Saskatchewan and win the Hardy Cup may have been stifled this year, but the core of this team suggests that UBC will be competitive for years to come. 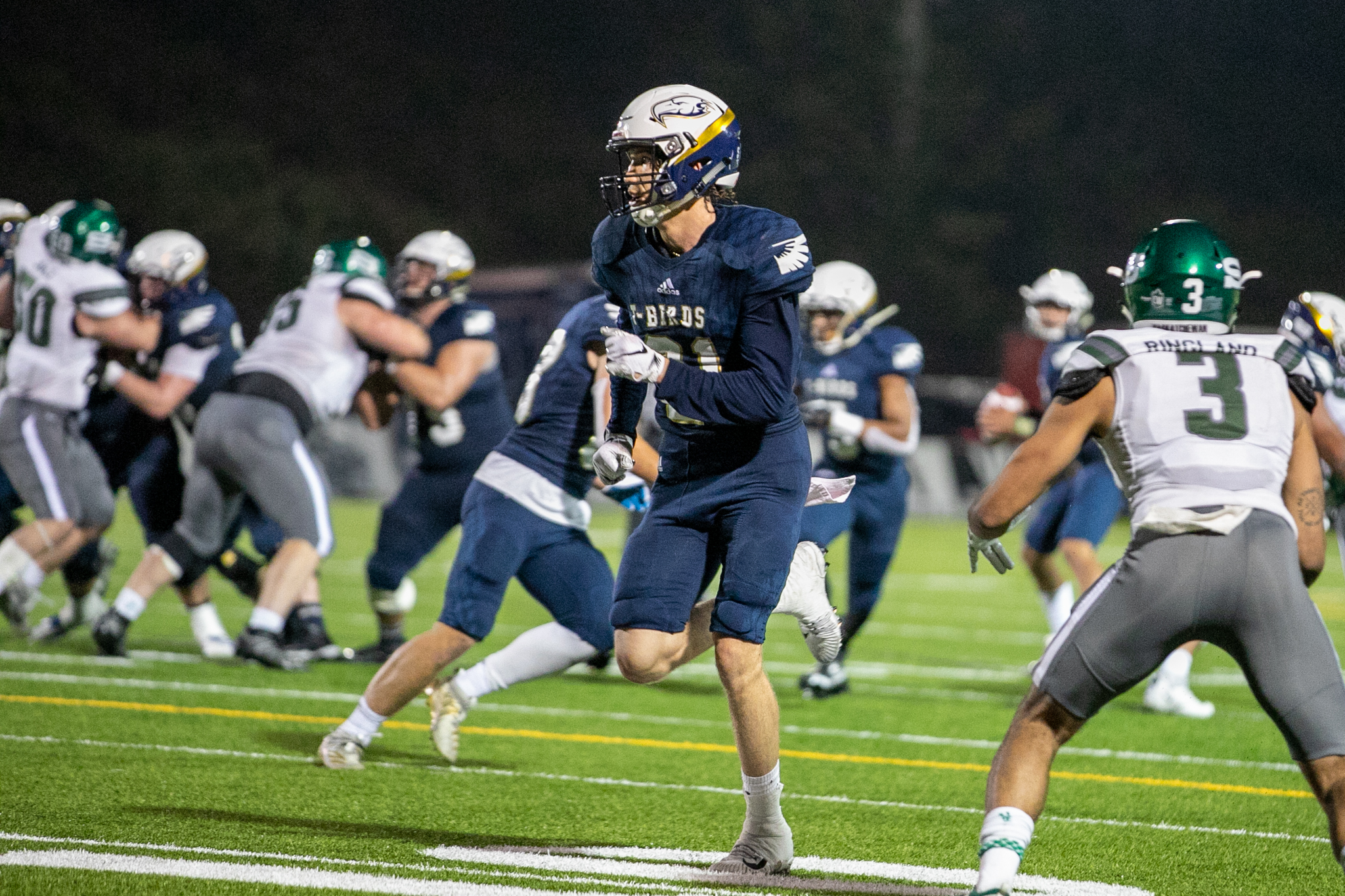 This marks the end of season for the T-Birds as Huskies advance to the Hardy Cup Final next week to play against the Manitoba Bisons. File Diana Hong

After advancing to Canada West final from a 1-0 win against the Mount Royal Cougars, the T-Birds clinched a fourth consecutive Canada West banner.

The T-Birds’ Final Four game against the Cougars was exchanging possessions and goal chances until UBC fourth-year defender Jackson Farmer scored in the 101st minute of the game. This victory also gave the T-Birds their ticket to U Sports Nationals, hosted by Carleton University.

“I just thought our boys put in a wonderful effort for 120 minutes,” UBC head coach Mike Mosher said. “But to be honest, being given the season we had and the adversity we faced through it all, I kind of anticipated that was probably going to be the case.”

The UBC first-year forward Sebastian Dzikowski scored in the 27th minute. The T-Birds were able to prevent the Vikes from coming back as this was the only goal of the match.

“It feels absolutely wonderful, just given all the challenges we went through, just really, really pleased for the group,” Mosher said.

The T-Birds’ first-year goalkeeper Bennet McKay had an exceptional performance this past weekend. McKay was named Canada West Men’s Soccer Player of the Week.

The T-Birds are at four victories in a row as they head to the upcoming U Sports tournament in Ottawa, hosted by Carleton University.

“One of the goals of this program is to win a Canada West championship, that’s pretty special,” Mosher said. “Four in a row now for us, that’s quite an accomplishment and a feather in our groups’ hat and many of them have been here for several of those championships.” 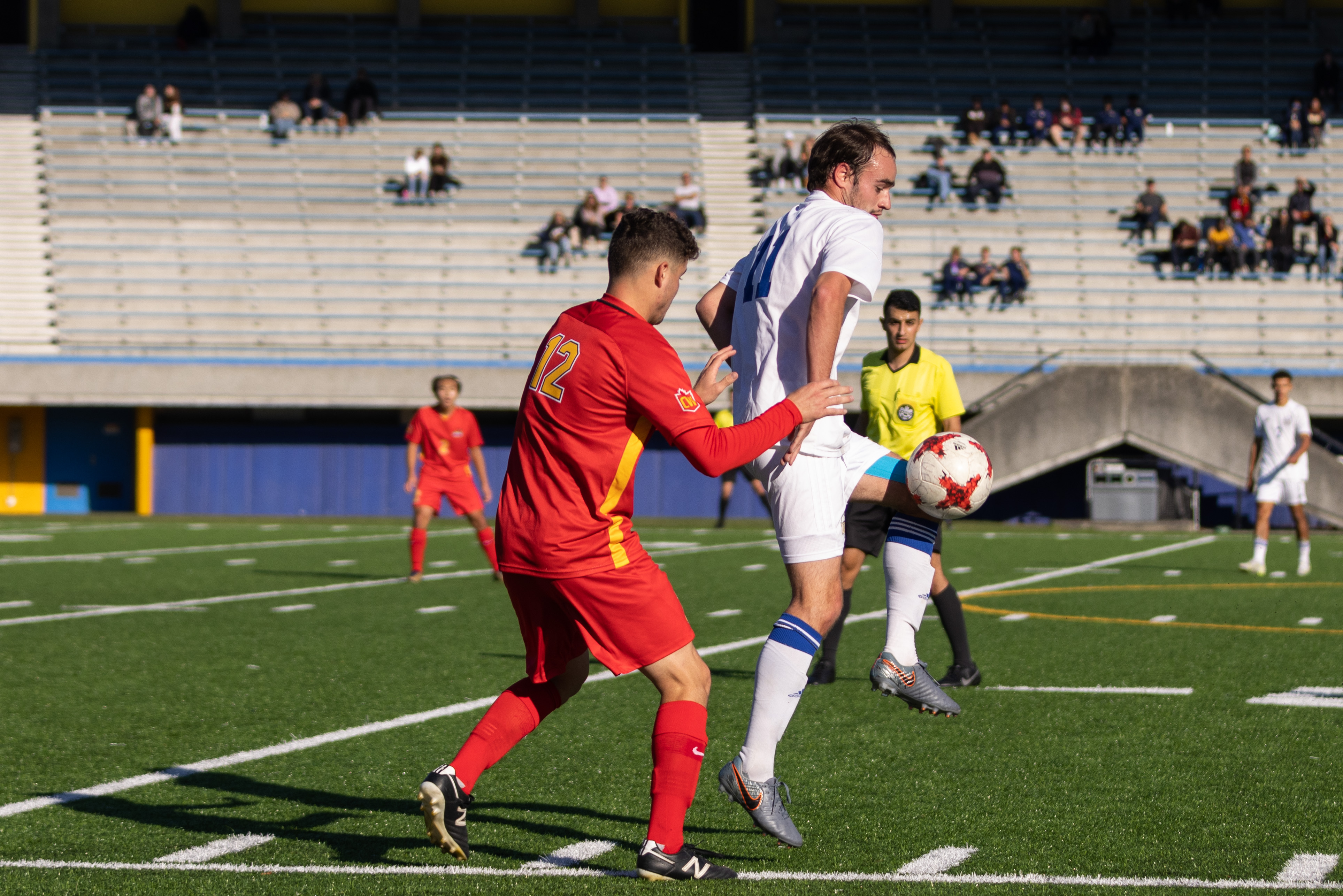 The T-Birds are at four victories in a row as they head to the upcoming U Sports tournament in Ottawa, hosted by Carleton University. File Diana Hong

In hopes to claim Canada West gold after a 2-0 win against the MacEwan Griffins last Friday, the T-Birds settled with second in the conference as they lost to the Trinity Western University Spartans with 1-0 the next day.

However, both the T-Birds and Spartans are off to Sydney, Nova Scotia for the U Sports National Championships, where the T-Birds hope to defend their 2019 title.

The game against the Griffins on Friday night challenged the T-Birds to adjust their plans.

“It was an interesting first half; we tried to control it, but MacEwan is a good team,” said UBC head coach Jesse Symons. “They made our team think as we had to find different ways to defend. Full credit to them, I thought they played really well.”

Both Griffins and T-Birds were very aggressive at the beginning of the first half. Then the T-Birds got in control of the game as they were able to pass the ball efficiently, but were unable to successfully complete their scoring chances due to great saves made by MacEwan’s second-year keeper Breanna Truscott.

The T-Birds’ fourth-year Tess McRae got in control of the rebound in the 87th minute and tucked it right through and gave a 1-0 lead for the T-Birds. Then Danielle Steer secured the win by adding another goal.

Even with a successful performance at the final four and a tough fight in the first 88th minute, the T-Birds were not able to secure the win they needed to obtain the Canada West championship title.

The beginning of the game was full of back-and-forth and counter-attacking plays from both teams.

At the 88th minute, however, Spartans’ Sierra Halldorson applied pressure at the end of the second half and quickly passed it to Kathryn Harvey, allowing Harvey to sneak it right to the back of the net.

Both T-Birds and Spartans are off to U Sports Nationals, which begin on November 18, hosted by Cape Breton University. 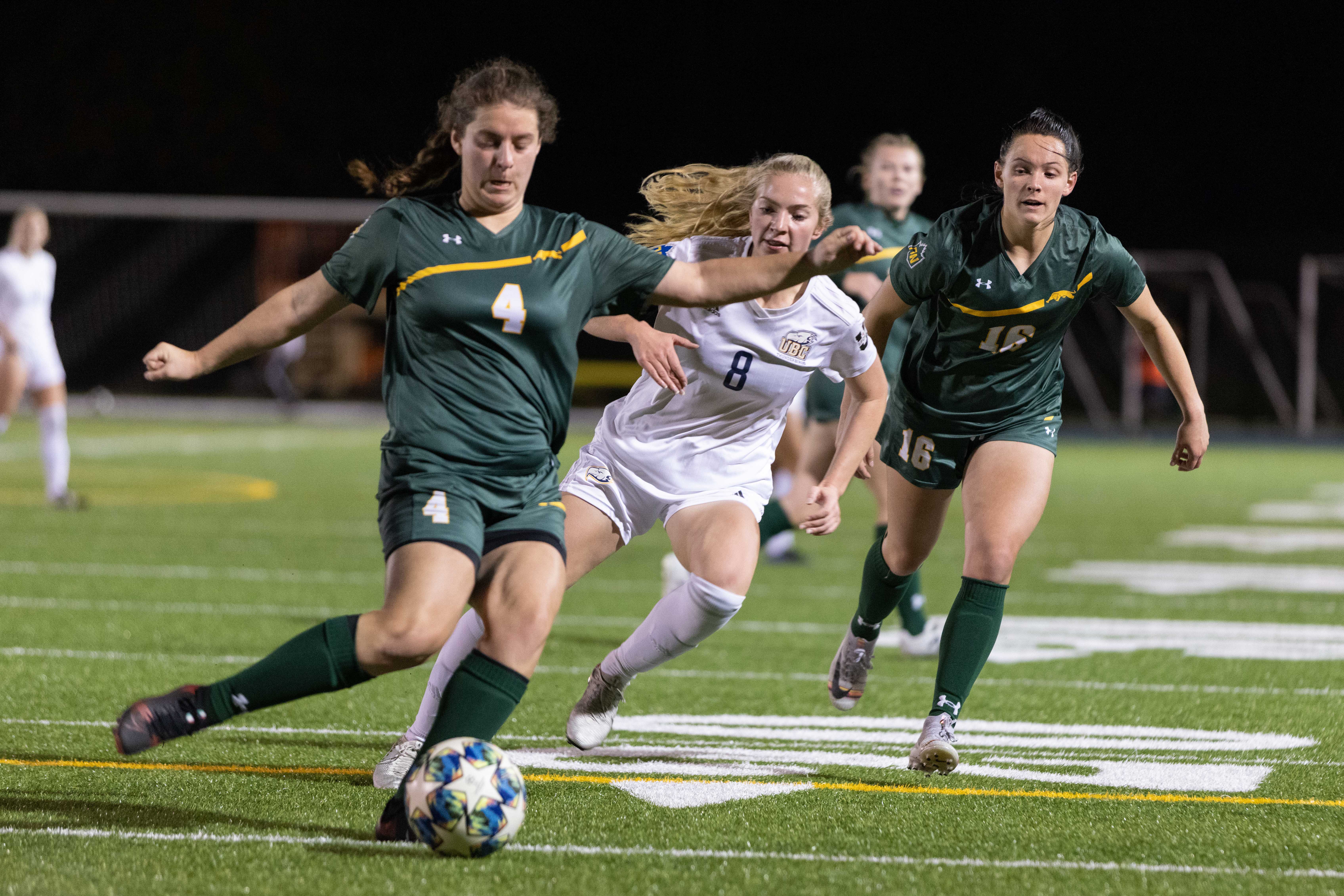 Both T-Birds and Spartans are off to U Sports Nationals, which begins on November 18, hosted by Cape Breton University. File Diana Hong

The T-Birds improved to 6-0 in their season as they brought home, yet again, another weekend sweep this past weekend against the UBC Okanagan Heat.

The T-Birds started the doubleheader with a convincing 99-65 victory and ended the weekend with another 75-54 victory.

Fourth-year Grant Audu executed 23 points as well as five rebounds and three steals. Continuing on from two weeks ago, Sukhman Sandu completed a double-double with 15 points and 12 rebounds.

The T-Birds get a bye-week this week and will host the University Fraser Valley Cascades for another doubleheader on November 26 and 27.

The T-Birds played against the Cascades two weeks ago and there were noticeable plays from the T-Birds.

The first game against the Cascades was on November 5. Fourth-year forward Sukhman Sandhu helped UBC get out to an early lead by going 6-of-6 from the free throw line in the first quarter.

Fraser Valley battled back in the second quarter and headed into the second half up by two points.

Early in the third quarter, Thunderbirds point guard James Woods hit a deep three-point shot to give UBC the lead. It would be the last lead change of the game as the T-Birds held on to win 70-64.

Woods led UBC in scoring, shooting 7-of-12 from the field, and an impressive 3-of-5 from three for 20 points.

T-Birds rookie Tobi Akinkunmi was a solid defense, leading the game with 3 steals. For the Cascades, guard Vick Toor was a standout with 18 points.

The T-Birds finished with back-to-back victories, winning 80-72 in their second game against the Cascades. Toor wasted no time getting Fraser Valley momentum, as he put up 10 points in the first quarter.

UBC quickly adjusted in the second and began double-teaming Toor’s possessions, holding him off the scoresheet in the second quarter as a result.

Thanks to multiple three-pointers late in the first half, the T-Birds headed into the intermission with a nine-point lead.

However, UBC faltered in the third quarter, getting outscored 28-9 by the Cascades, and the team found themselves in a 10-point hole with one quarter to go.

Woods dominated the game with 22 points, nine[spell out]inen of which came in the fourth quarter and led the team to another win. 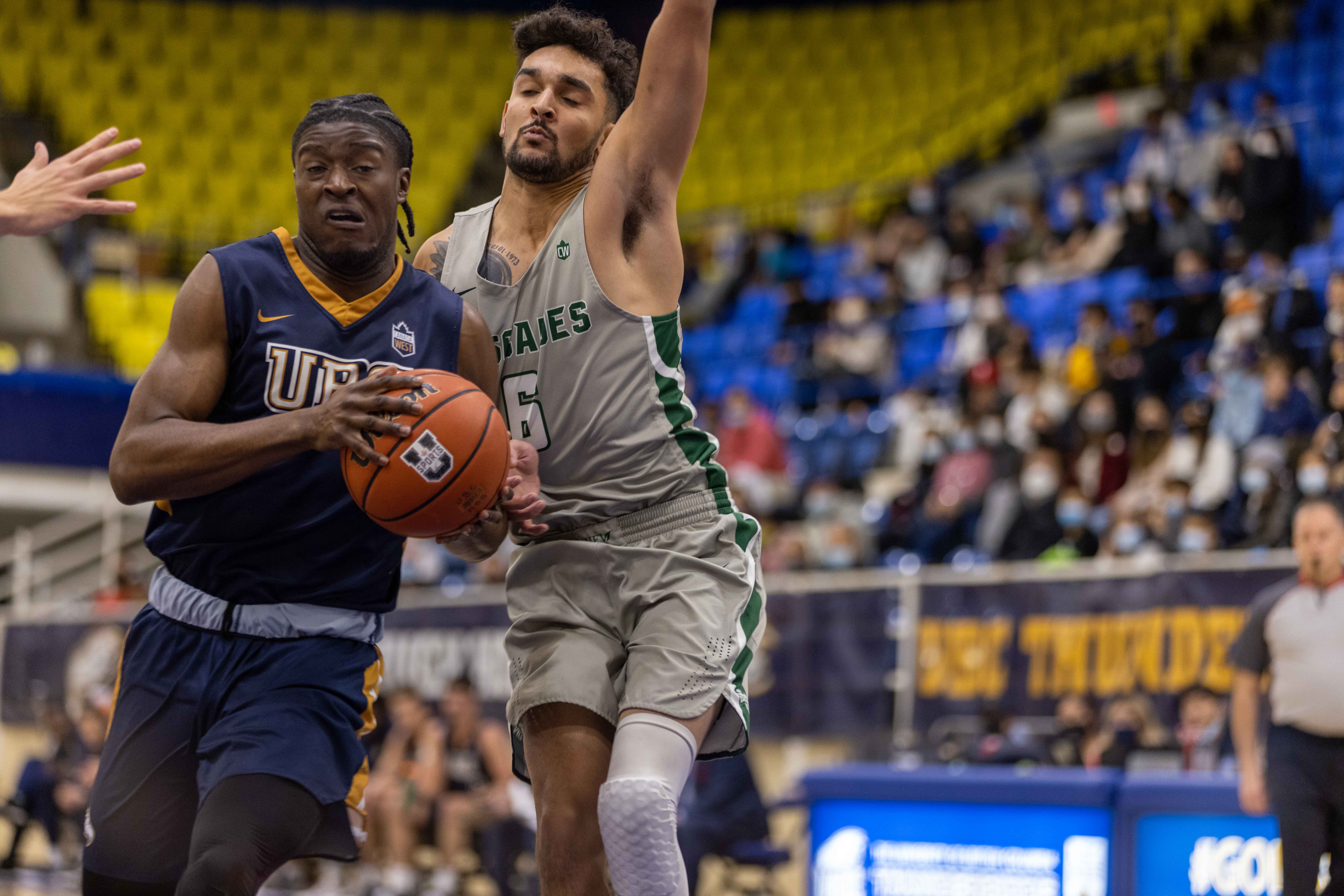 The T-Birds get a bye-week this week and will host the University Fraser Valley Cascades for another doubleheader on November 26 and 27. Diana Hong

Another weekend split from women’s basketball

After a weekend split against the Fraser Valley Cascades two weeks ago, the T-Birds closed this past weekend with another 1-1 against the UBC Okanagan Heat.

Fourth-year Kate Johnson ended the first game against the Heat with a career-high 29 points, including 9-of-19 from the field and 9-of-11 from the charity stripe.

After a quick turnaround, the T-Birds were able to come back with a 63-61 victory. UBC’s rookie Olivia Weekes led the team with a double-double, including career highs in both 21 points and 10 rebounds.

This weekend split was displayed again two weeks ago when they played against the Fraser Valley Cascades.

The first quarter was challenging for the T-Birds as it ended with the Cascades holding the lead 19-14. The second quarter was where the T-Birds really began to fight back. While both teams did struggle to get the ball in the hoop, the T-Birds had some amazing defensive efforts.

Third-year forward Azalya Forstbauer played a big role in this game with the Cascades facing foul trouble; without her free throws, the T-Birds may have had some trouble catching up. The third quarter had many turnovers and ended with the Cascades leading 45-43.

As the fourth quarter rolled around the T-Birds really relied on fourth-year guard Kate Johnson, who took this responsibility and once again had an outstanding performance. She scored 19 of the team's points and made the crucial shot in the last 35 seconds, helping the T-Birds take the win, 60-59.

The team carried this momentum into the second game of their doubleheader against the Cascades but just fell short after the game went into double overtime, resulting in a 71-64 loss.

The T-Birds get a bye-week this week and are off to Prince George to play against the UNBC Timberwolves. 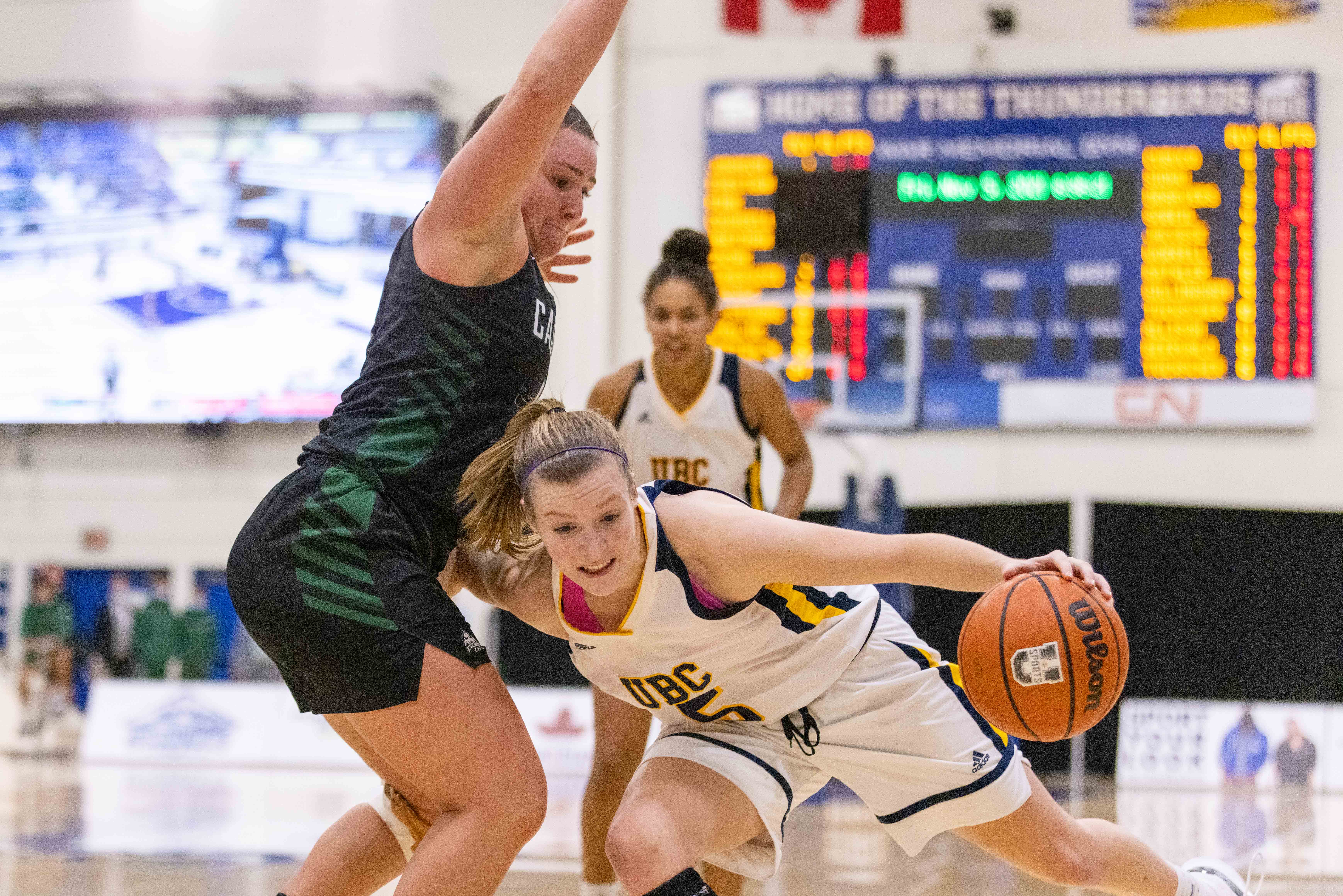 The T-Birds get a bye-week this week and are off to Prince George to play against the UNBC Timberwolves. Isabella Falsetti