Women's and men's soccer came back with big wins after opening the weekend with a tie and loss respectively. Men's hockey finally got their first win of the year against the Regina Cougars. 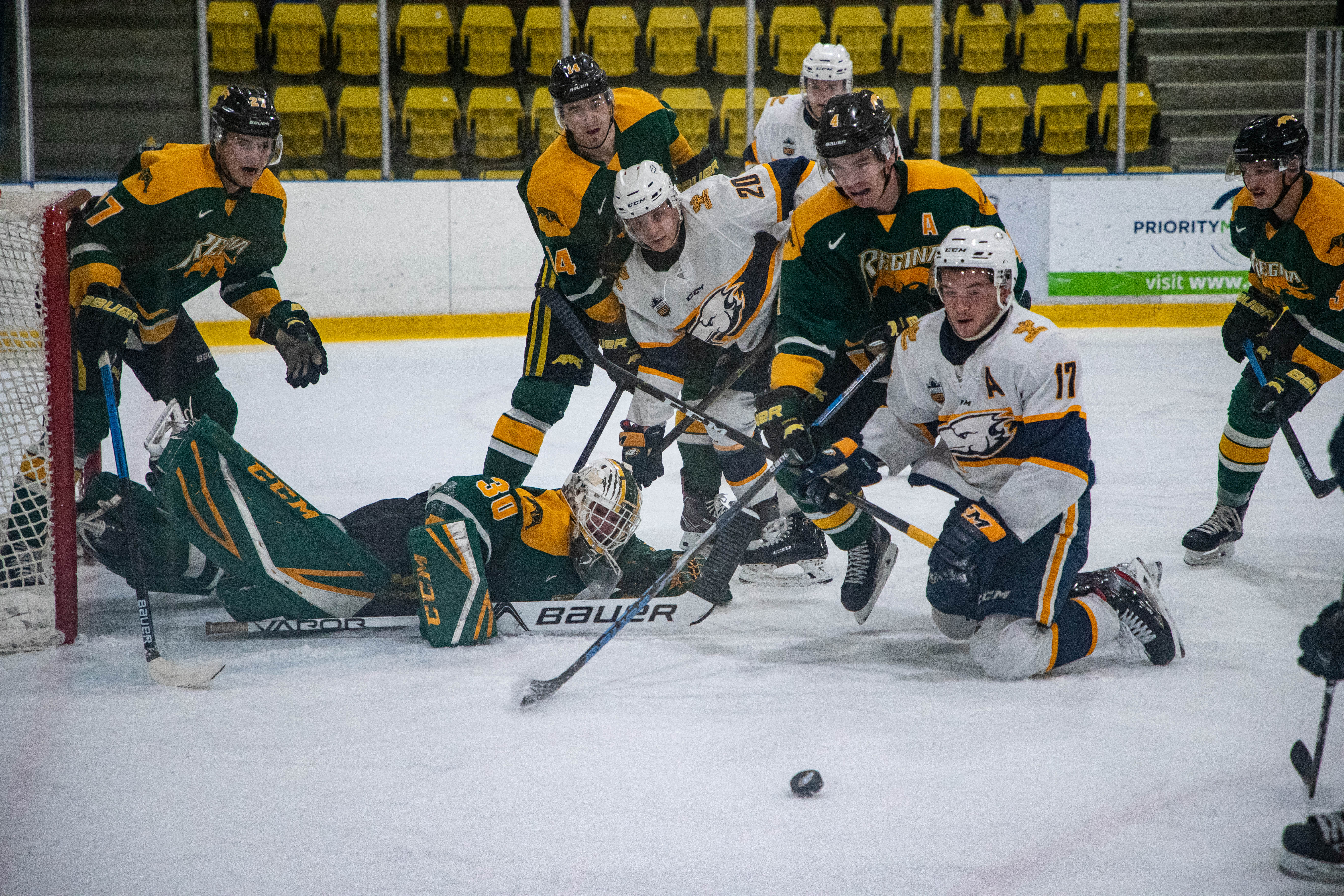 Players scramble for the puck in front of the Regina goal. Salomon Micko Benrimoh

The T-Birds dominated their opponent right from the start. The first goal came in the ninth minute when T-Birds forward Alyssa Hunt shot a gracious curved ball that went into the upper-right corner of the UNBC goal.

Faced with overwhelming odds, UNBC failed to register a single shot on the UBC goal in the first half. At the 29th minute, UBC forward Michelle Jang got her name on the scoresheet after curving the ball into the right corner of the goal.

Twelve minutes later, Hunt scored her second goal after receiving the ball from Jang, ending the first half 3–0 for UBC.

While still dominating, dangerous chances weren’t as plentiful for the T-Birds. One such chance came in the 64th minute when UBC forward Liesanne Musico’s shot hit the crossbar. UNBC got their consolation goal in the 84th minute when forward Sofia Jones received the ball from Kiana Swift and scored.

“We jumped on them early, and we moved the ball well,” UBC head coach Jesse Symons remarked. Regarding the playoffs, Symons added “we’re excited and we’re ready to go. It’s that time of the year that everyone is excited for, and on we go.”

The T-Birds will play their first Canada West playoff game against the University of Lethbridge Pronghorns this Friday. 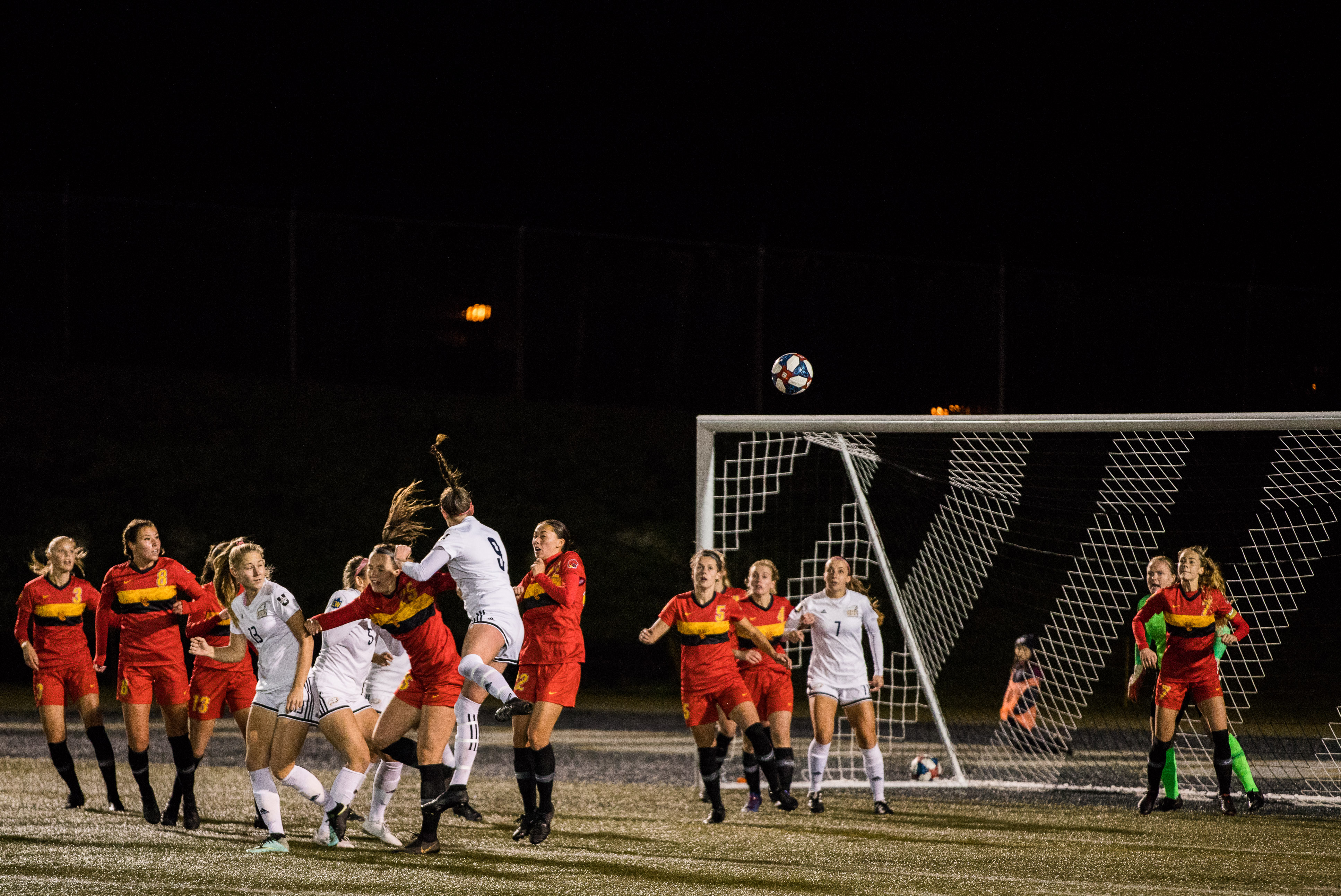 The Thunderbirds will play the Lethbridge Pronghorns in the Canada West play-in. Aman Sridhar

The UBC Thunderbirds continued to look for their first win of the season against the Regina Cougars Friday night, coming up short in a 2–1 loss.

The Thunderbirds dominated possession for the first five minutes of the game, generating multiple scoring chances against the Cougars.

A partial breakaway for Regina forward Arthur Miller lead to a penalty shot just under five minutes into the first period, which was saved by Thunderbirds goalie Patrick Dea.

Shortly after, the home team would take two consecutive penalties, which resulted in a five-on-three power play goal by Cougars captain Tristan Fei when his pass deflected off a Thunderbirds defenseman and into the goal. Both teams took another penalty in the opening frame, with neither of them being able to capitalize.

The second period saw lots of back and forth action between the two squads without many stoppages in play. UBC tied the game just under 14 minutes into the frame when Quinn Benjafield tapped the puck into a wide open net after Cougars goalie Brandon Holtby was left out of position following a fanned shot by another Thunderbirds player.

The period would end with a scrum, resulting in a powerplay for Regina to start the third. After successfully killing off the penalty, the Thunderbirds maintained the majority of possession for the rest of the period.

However, it would be the visiting side who broke the tie, as an odd man rush resulted in a top shelf snipe for Regina defenseman Clayton Eisler with just over a minute left in the game. The Thunderbirds would pull their goalie right after the ensuing faceoff in an attempt to force overtime, but came up empty-handed.

Sunday held a better result for the Thunderbirds, as they came back from an early deficit to beat the Cougars 4–1.

Coming off a bitter 4–1 loss to rivals Trinity Western University on Friday, the UBC Thunderbirds men’s soccer team dominated the University of the Fraser Valley Cascades on Sunday with a 3–0 victory. This win gave the T-Birds their eighth-straight Canada West Pacific division title.

“We wanted to have a better performance today after a very poor performance on Friday night, the game we lost, so that was certainly the hope for today and we got some other players in the game, which was good,” said Mike Mosher, the T-Birds’ head coach.

Right from the beginning, T-Birds’ defence performed very well, keeping the ball away from their end for most of the game and limiting the Cascades’ offensive chances.

In the 21st minute, third-year midfielder Sam Fletcher scored directly off a corner kick made by second-year defender Jordan Haynes to give the ’Birds a 1–0 lead.

Right after the T-Birds’ first goal, another came via fifth-year midfielder Kerman Pannu off another successful cross made by Haynes.

Shortly after half time, the T-birds were given a free kick just outside the box. Second-year midfielder Thomas Gardner took advantage of the chance and gave the T-Birds a commanding 3–0 lead with beautiful kick that sailed over Cascades defenders and past their leaping netminder.

The Cascades kept battling for goal opportunities, but the T-Birds played well defensively and rarely let them past the halfway line.

The T-Birds will play against University of Alberta Golden Bears this Friday at 7 p.m. in the opening round of the Canada West playoffs. Sunday’s win also meant the Cascades were eliminated from playoff contention. 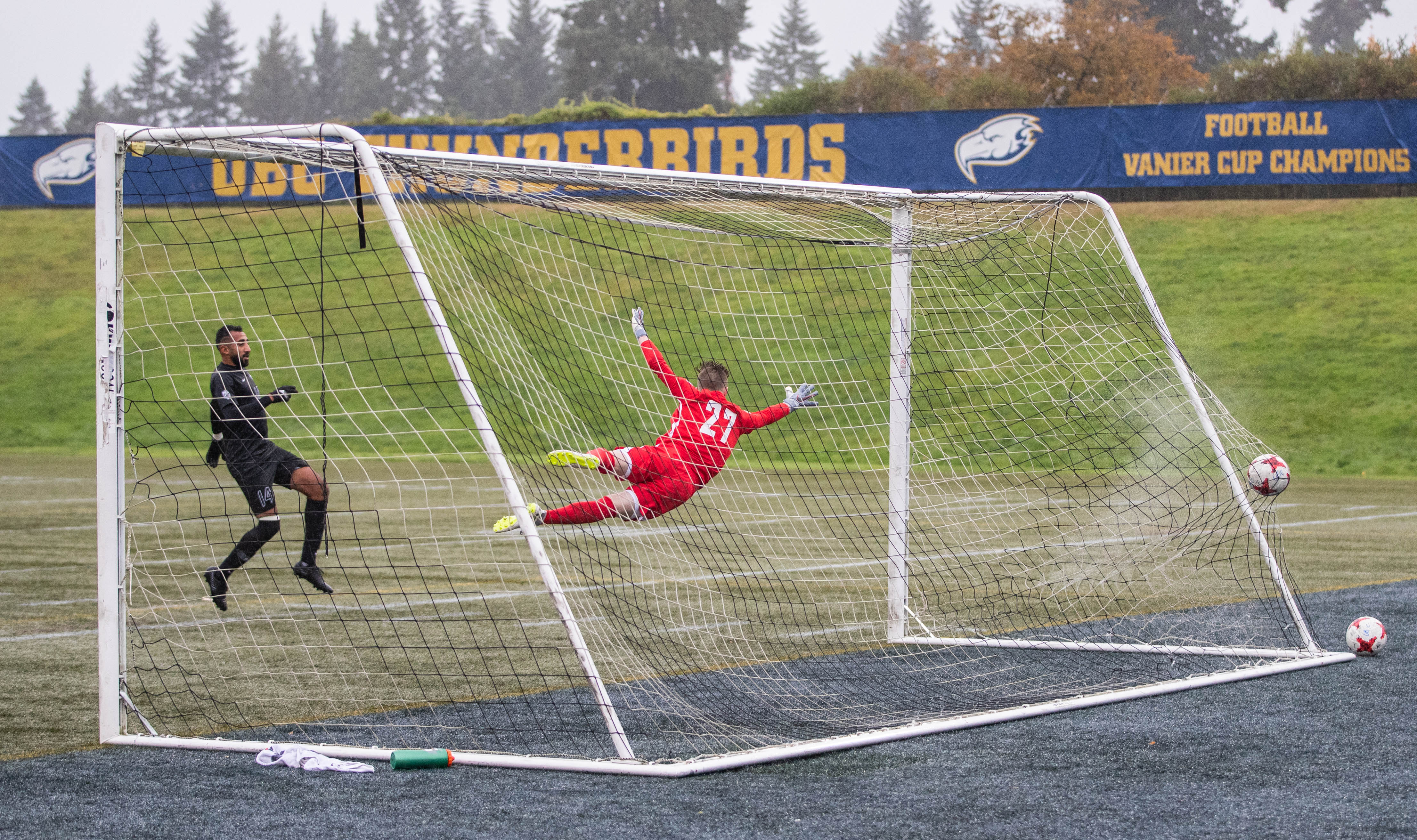 Weekend rundown: Close competition all around with rival teams