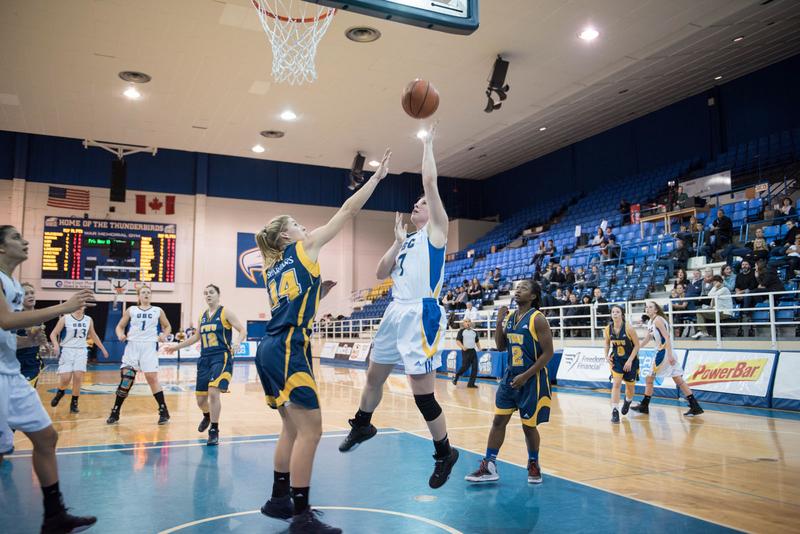 Krysten Lindquist is one of the senior players on the roster this year, in her third year of eligibility. Jeremy Johnson-Silvers

The Thunderbirds women's basketball team started their 2017/18 regular season off with a bang, securing two solid victories against the University of the Fraser Valley Cascades (UFV) — a 71-62 win on Friday, October 27 and a 69-49 win on Saturday, October 28.

On the surface, and heading into their season, the ’Birds looked a little shaky as they faced several losses in pre-season. The team has a frighteningly young roster this year, with their most senior players — Krysten Lindquist, Jessica Hanson and Maddison Penn — only in their third years of eligibility.

But beyond those numbers is a team that is constantly learning — figuring out what works, what doesn't and adjusting to new realities. In addition, it’s a team with many players that are ready to step up and pull their weight.

“Everyone has to feel like they have the opportunity to contribute and that they have a responsibility to contribute,” said UBC head coach Deb Huband. “We can’t be looking over our shoulders thinking that anybody else is going to get the job done.

“Everybody has to take that on their own shoulders and bring it every single game.”

Friday's game started out with both teams matching each other point for point. The ’Birds and the Cascades stayed neck-to-neck for the first two quarters. By the end of the first half, the ’Birds were only ahead by one point at 31-30.

In the third quarter though, a Penn three-pointer broke the Thunderbirds away from the stalemate. From there, UBC picked up the tempo and never lost that lead. The ’Birds field goal percentage (FG%) in the first half was 36 per cent, whereas it improved to 56 per cent in the second half. Similarly, they scored 40 points in the second-half, an improvement on their 31 in the first.

“One of the goals of the group is the third quarter. First half is important obviously, I think teams feel each other out a little bit,” said Huband. “But once you match up and you have a first-hand experience, then we want to make sure we come out strong in the third quarter and learn from what happened prior and have a really good start to the second half.”

UBC also benefitted from a bold paint game with second-year forward Keylyn Filewich at its head. Filewich made 10 of her 13 attempts on the basket — leading the team offensively with 21 points.

“She had some pretty good games in her rookie year and was a Canada West all-star in her rookie year,” said Huband of Filewich. “She’s young, she’s a strong player now and she’ll be even a stronger player as she gains more experience.

“It was nice to see her be that inside presence that we need that compliments some of our outside skills.”

On Saturday, the ’Birds once again took the game, this time with more confidence and a 20 point lead. Filewich led once again with 21 points while Penn and Hanson tied for 15 each.

With two wins so far in the season and a taste for the regular season, the young ’Birds can only get better as the season progresses.

“We’re learning as we go and we're learning through opportunities,” said Huband. “We’re just trying to get better everyday.”

The T-Birds will get on the road and play the University of Calgary Dinos on Friday, November 3 and Saturday, November 4.