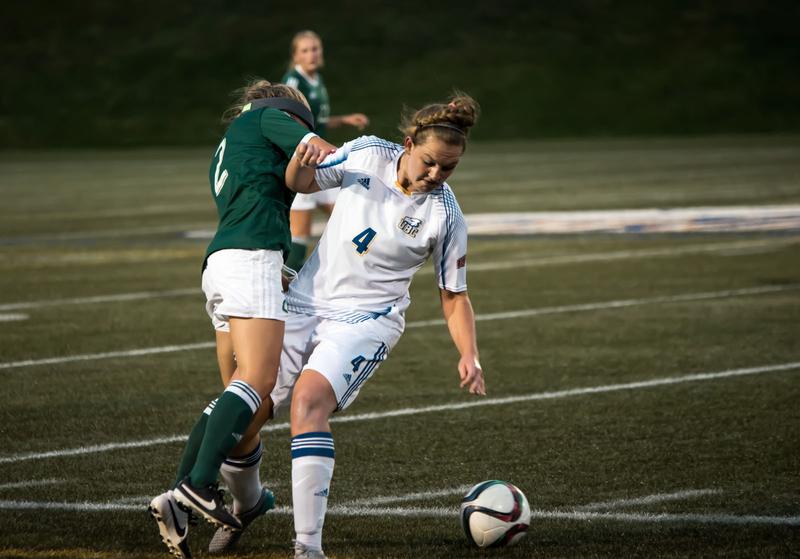 It's a new week and two well-coached teams had a chance to bounce back.

This weekend was a good homecoming for the UBC Thunderbirds women’s soccer as they took both their matches and pushed themselves to a season record of 4-1-0. The jump forward puts them first in the Canada West standings with rivals such as the University of Fraser Valley Cascades (3-0-1) and the Trinity Western University Spartans (2-1-1) trailing not far behind.

On Friday, the Thunderbirds went head-to-head against the University of Alberta Pandas ending their undefeated streak with a two-nil victory in the Thunderbird Stadium.

This came after a demoralizing loss to the University of Fraser Valley Cascades -- aptly nicknamed “‘Bird Killers” -- last weekend. The Cascades are the only team to have beaten both Thunderbird soccer teams in recent memory and also managed to do it on their home turf at Thunderbird Stadium.

Cascades’ Monika Levarsky opened up the scoring in the 14th minute after her team capitalized on a missed attempt on goal by UBC’s Taylor Shannik and counterattacked the T-Bird’s net. The ‘Birds tried to comeback with a header by Shayla Chorney soon after in the 19th minute, but Cascades Tristan Corneil scored another for her team in the 57th minute.

In the final minutes, the ‘Birds thought they had tied the game with a goal by Nicole Sydor, but it was ruled as an offside.

“Often this week, we talked about bouncing back. One loss isn’t going to hold us back or define us,” said newly appointed head coach Marisa Kovacs. “We wanted to bounce back and this weekend we did with two wins, so we’re happy about that.”

The Thunderbirds took down the Pandas with two goals. The first goal in the 49th minute, after a beautiful cross from Midfielder Taylor Shannik, was put in by fourth-year Sydor and the second by rookie Amelia Crawford in the 74th minute securing the game for the T-Birds. Both were the players' first goals of the season.

“I thought we came out strong, but we just kind of got complacent," Kovacs said about the first half of the game. “We weren’t attacking at pace like we needed to ... just keeping that focus. I don’t think we played bad, but we just need to keep the pressure on and keep firing.”

Then on Saturday, the T-Birds defeated the University of Northern British Columbia Timberwolves with a lone goal in the final minutes of the game. The visitor’s defence was incredibly solid. While they made numerous errors with turnovers right in their own half, they were quick to react and closed up the cracks in their defence effectively. For most of the game, the Timberwolves were hard to break and deftly stopped the T-Birds in their tracks.

This was particularly evident when looking at the stats for the match. UBC had 32 shots, 13 of which were on goal and 14 were corner kicks as compared to UNBC’s zero shots and zero corners. Meanwhile, the Timberwolves led on saves by their goalkeeper, Jordan Hall, with 12 saves as compared to the zero for the ‘Birds.

The ‘Birds pummelled the Timberwolves for 85 minutes before a well-timed pass from defender Aman Shergill found Jasmin Dhanda. Light on her feet, Dhanda danced around the UNBC defence before scoring a streaker in the bottom right corner of the Timberwolves’ net.

“It was a game that I think we had to persevere through,” said Kovacs. “They are a good defensive side and are well organized, but in the end we only need one and we got our one.”

During the entire game against UNBC, the ‘Birds played hard and aggressive. Although it is still early in the season, the team played like this was a conference final. They were fast on their feet and chased down the ball even in their opponent’s back field. Perhaps this can be attributed to Kovacs' “high-pressuring” coaching philosophy.

“We always talk about determination and perseverance, [they are] some of our core values as a team and I think we showed that today,” Kovacs said.

This was particularly important for the ‘Birds on Saturday. There were several moments in the long match where the team could have become “extremely frustrated” and blown the match. But instead, they kept moving forward.

“I think we always had the belief that we would find a way and thank goodness we found a way.”

Looking forward, the ‘Birds will be facing off against their sister school, UBC Okanagan Heat and the Thompson Rivers University Wolfpack next week. While the Thunderbirds have successfully held back both teams effectively in the past, they will be facing them on the road. Kovacs is hopeful that the team will be home victorious.

“Another game where we're going to have to work on our speed of play and quick countering and high-pressuring.... If we can put the ball in the back of the net and stay solid on defence, I think we’ll hopefully come home with some good results.”