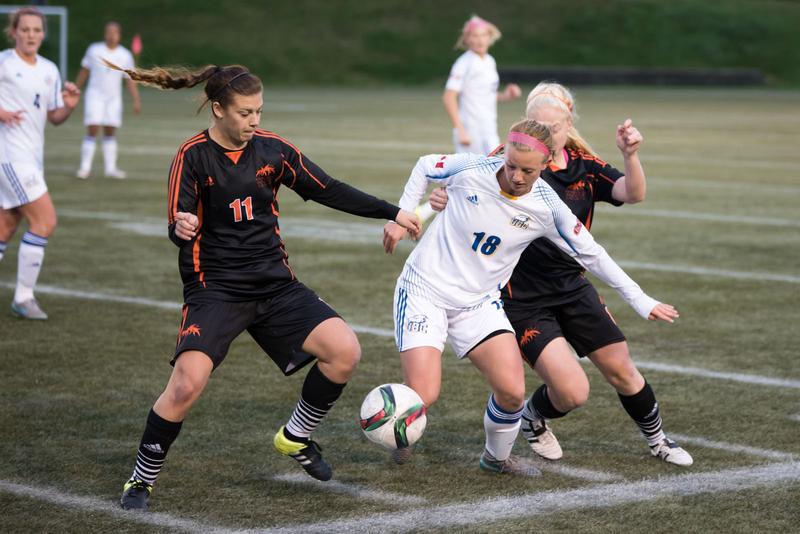 Taylor Shannik, who opened the scoring for UBC, protects the ball

In a huge playoff win on October 30, the UBC women’s soccer team dominated the Thompson Rivers University Wolfpack with a score of 6-1.

Thompson Rivers began the game with possession and the first five minutes indicated that it was going to be a close match. The Wolfpack put strong pressure on the Thunderbirds defence, forcing UBC goalkeeper Olivia de Goede to make a great save at the end of the second minute.

By the 11th minute, UBC had asserted their offense with Taylor Shannik opening the scoring off of a beautiful cross from Amrit Berar. In the 15th minute, Jasmin Dhanda was striking up the wing when she was tackled by TRU’s goalie inside the box. She was awarded a penalty kick which was stopped.

The T-Birds struck again in the 18th minute when a free kick was awarded for a handball just outside the box — Aman Shergill put the ball into the back of the net.

Almost the entire rest of the first half was spent in the Wolfpack’s half. UBC scored again in the 23rd minute with Madison Guy capitalizing off of the confusion following a corner. A yellow card was given to the Wolfpack's Kindra Maricle. Two shots from the ‘Birds went wide and the Wolfpack managed their second shot on goal before the end of the half.

Once again, the beginning of the second half marked a weak point for UBC. Following a number of substitutions made during the halftime, UBC struggled to maintain possession. Despite this, Amelia Crawford took advantage of an out of position TRU goalkeeper to put UBC up 4-0 in the 48th minute.

The next 15 minutes were reasonably uneventful with two corners for the ‘Birds, a wide shot and the Wolfpack managing their first shot on goal in the second half. In the 67th minute, Janna Speed took a pass from the keeper all the way down the field to score on a great shot to put the ‘Birds up 5-0.

It wasn’t until the 80th minute that TRU was able to end de Goede’s shutout with Danielle Fauteuil putting the ball into the back of the net. The ‘Birds responded five minutes later, once again capitalizing on an out of position Wolfpack goalkeeper. Nicole Sydor received a pass from Speed to score the final goal of the game.

“I thought we executed our game plan [and] got the goals going in the first half like we wanted to,” Head Coach Marisa Kovacs commented following the big win. “I’m proud of my girls.”

This win has given the women a place in the Canada West Select Six and a bye in the next round of the playoffs.