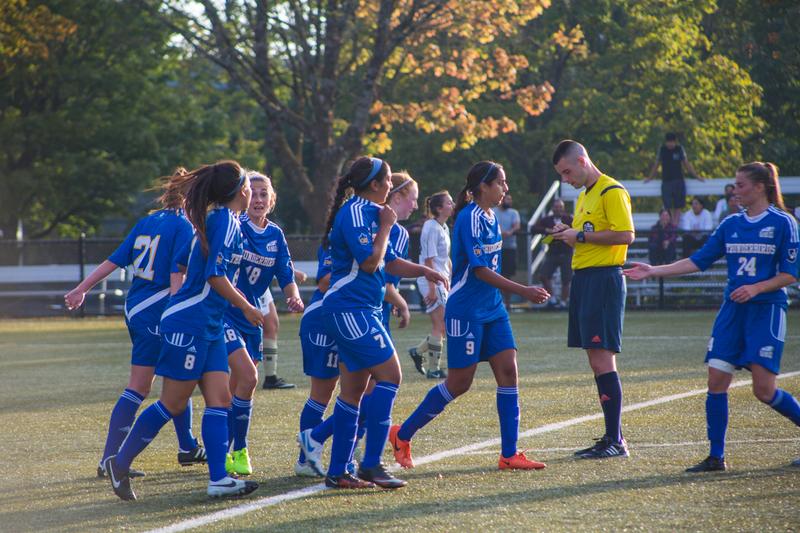 The 'Birds are in second place in Canada West, having played five games so far this season Zach Kourgialis

The UBC women's soccer team stepped into their first weekend at home looking as solid as ever and walked out with two more wins and a hot streak that looks nearly unstoppable.

The Friday match-up saw a continuation of the 'Birds’ signature offensive style this season: high-tempo and with multiple lines of attack. From the kickoff, UBC was aggressive and honed in on the Wesmen goal.

In the fourth minute, they hit their mark. Fourth-year forward Margaret Hadley got onto the ball and passed to an open Jasmin Dhanda in the centre of the box. The veteran striker made her chance count, scoring her third goal of the season.

The second goal, which came in the 10th, was scored by Dhanda as well with an assist from T-Bird forward Aman Shergill.

With UBC doubling their lead, the Wesmen were starting to get desperate, shooting from far away and with players attempting lone runs into the T-Birds' box. The Thunderbirds comfortably handled their advances.

At the other end of the pitch, Winnipeg's goal was constantly bombarded by the 'Birds' attacks. Shots during the game were lopsided at 22-4 in favour of the home team.

"Today defensively we were so solid. We kept the ball when we had to," said UBC head coach Jesse Symons.

"We controlled spaces well and when we did win [the ball] we play away from pressure and [got] forward again which was great to see from the team."

The second half saw a different Winnipeg team, with closer ranks and a more aggressive attack. However, a 52nd minute goal from UBC second-year midfielder Emma Cunningham shut down the chance at a comeback. In the 85th, Hadley increased the goal difference when she fired the ball across the mouth of the goal and into the right top corner to make it 4-0.

Thunderbird defender Meghan Douglas capped off the 'Birds home opener with a goal of her own in the 87th, when Hadley chipped the ball over Winnipeg’s goalie and Douglas headed it in.

As they moved into Saturday's game against Manitoba, the strategy was the same. "Just get on the ball and try to move it and make them defend us and hopefully we’re able to get around goal," said Symons in an interview after Friday’s game.

Manitoba got in on the scoring early, with an eighth minute goal from Bison's midfielder Florin Wagner. The 'Birds hustled for a goal of their own, which finally came when Hadley scored the equalizer in the 38th — her second goal of the season. As the first half wound down, Shergill got a pass from Dhanda and put the ball into the bottom right corner to make it 2-1 in the ’Birds favour.

The second half saw the Thunderbirds attack Manitoba’s goal non-stop. This was eventually rewarded in the 73rd when Shergill crossed the ball towards the goal and first-year forward Danielle Steer tapped it in. The T-Bird's fourth and final goal came from Dhanda in the 84th with an assist from second-year forward Liesanne Musico.

With four wins in the bag and a loss, the 'Birds are currently second in the Pacific Division and are looking to be strong challengers in the 2017/18 Canada West season.

The Thunderbirds will be facing the Thompson Rivers University Wolfpack on September 23 in Kamloops, BC and then the UBC Okanagan Heat on September 24 in Kelowna, BC.