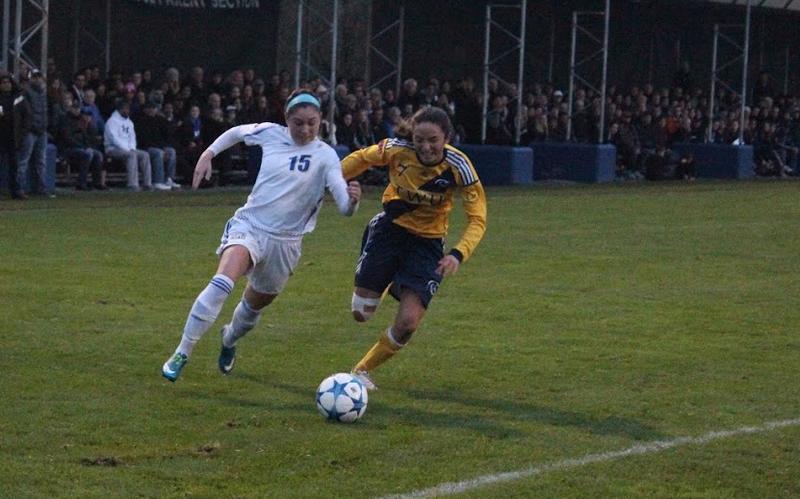 Relying on exceptional defence, the Thunderbirds were able to hold off the Trinity offence and win 3-0, capturing its 15th Canada West championship title.

“That was a full-team performance. We’ve been talking since August that we’re a team that’s going to push through November,” said Jesse Symons, who is in his first year as the UBC head coach. “I’m very impressed with the mindset that they came in with this game.”

For players who were with the T-Birds last season, like fourth-year striker Jasmin Dhanda, the Canada West gold was their second consecutive championship title.

“We just came out today and worked our hardest. We knew we were playing an undefeated team, so we’d have to work extra hard. It was great,” said Dhanda.

In the 26th minute, the ’Birds were first to get onto the scoreboard when UBC defender Meagan Pasternak delivered a cross from the right side of the box to neatly set up forward Amelia Crawford for the one-timer from the penalty spot, which went into the top right corner of the net.

The ’Birds struck again in the 43rd minute on a near identical play to the first goal. This time, it was Jasmin Dhanda who netted the goal, with the assisting pass from Sydney Jennings.

Despite the Spartans’ immense pressure on the ’Birds in the first half, they were unable to find the score sheet. Put simply, the ’Birds were able to capitalize on the few chances they had.

“[The Spartans] had a lot of weapons up front, and I think our back four and Marlee [Maracle] … controlled the Trinity attack from start to finish for the most part,” said Symons.

UBC was able to pressure the Spartans more in the second half. Trinity keeper Carmen Mostat came up big on two occasions, robbing Madison Guy’s volley in the 61st minute and Jasmin Dhanda’s counter attack in the 75th.

The ’Birds would finally get their insurance goal from Rachel Jones in the 88th minute.

“We got a few early goals and that kept us up. The last third one was just to finalize everything and we’re glad to go,” said Dhanda.

With the win against the Spartans, the ’Birds will go on to the CIS National Championship next week in Wolfville, Nova Scotia.