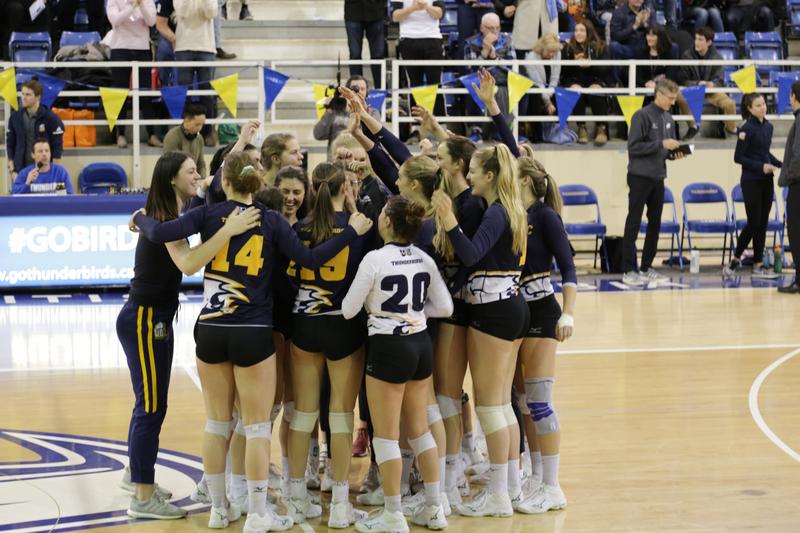 UBC women’s volleyball are one game away from national gold.

In the first of two U Sports championship semifinals this evening, the Thunderbirds defeated the Dalhousie Tigers 3-1 to claim their spot in tomorrow's national final.

UBC’s Tessa Davis also took player of the match with 12 kills on 35 attacks and 3 aces.

Throughout the game, the ’Birds blocking was much more effective than in the quarterfinal on Friday, as they got hands on almost every Tigers attack.

The first serve of the semifinal game was an ace for UBC setter Olivia Furlan — a positive start for the Thunderbird squad. That said, Dalhousie took advantage of dumps over the UBC front line early and caught the ’Birds pinching up later in the frame. Even so, Kiera Van Ryk closed the final point of the set with a finesse shot into centre court for UBC, taking the 25-20 win.

In the second, UBC and Dalhousie traded points to 4-4. From there, the ’Birds got three consecutive points to take the lead, but the Tigers would tie it up again at 8. The Thunderbirds hitting struck a lull at the midpoint of the set, giving the Tigers an opportunity to make up ground as they ahead 16-13 into the technical timeout. The ’Birds continued to battle hard, bringing the score back to 19 all. The set continued to be close, with long rallies as it slowly approached match point. However, the ’Birds would give up the set 22-25 on a disorganized final point. UBC had 6 serving errors that set.

The third opened with some hard hitting from both teams. The ’Birds continued to have trouble on the service line — a struggle all game — yet the match remained locked at 7. UBC had a slight momentum swing after three blocks for the ’Birds, helping them take a commanding 16-10 lead. UBC’s energy was vibrant on the court from then on, forcing Tigers head coach Rick Scott to take a timeout down 7. The Tigers would not muster much of a comeback and during set point for the ’Birds, Furlan — who had 44 assists on the night — took advantage with a dump into space, taking the third set for UBC 25-16.

To start the fourth, UBC used the momentum from the previous set, going up three early. The Tigers brought the score back, going up 7-5 and forcing ’Birds head coach Doug Reimer to call a timeout to settle his roster. Tied at nine, Tessa Davis used her brilliant serving to bump UBC up five, starting their quick climb to the finish line.

Van Ryk, as she always does, continued to cause massive problems for the opposing teams defense, as she put away 15 kills in the match. Exciting rallies late in the fourth were capitalized on by UBC, who played both sides of the ball with intense focus. ’Birds libero Sam Patko also had another outstanding defensive game with a match-high 19 digs. The Tigers would put the last two balls of the semifinal match into the net as UBC heads off to the finals on a 25-21 final set win.

The overall match ended 3-1 for the T-Birds. They now look to the national final, where they hope to claim their 12th national title in program history.

UBC now waits to see if they will face either the host Alberta Golden Bears or the Ryerson Rams in the gold medal match tomorrow. The two sides are currently facing each other in the second championship semifinal.