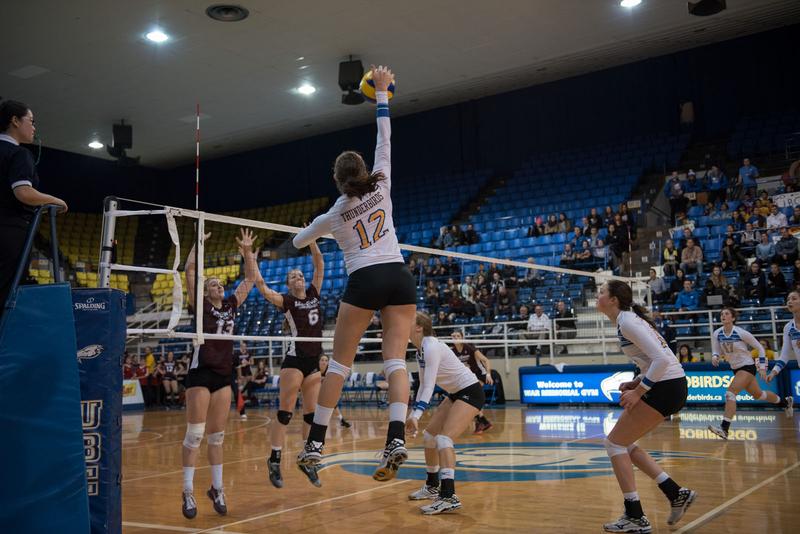 Women’s volleyball team took on the McEwan University Griffins this weekend on Friday and Saturday, beating them in both games to maintain their position in the Canada West conference tying at second with sister school UBC Okanagan.

The wins came after a surprising weekend split against the Mount Royal University Cougars with a second game that ended with a shocking 1-3 loss. For head coach Doug Reimer, the team just made too many mistakes.

“We just made, way, way too many errors the second night, not quite as focused in our craft,” said Reimer, who is in his 18th season as coach.

Last weekend was the ’Bird’s worst weekend of the season, but the team bounced back and smashed past the Griffins to extend their conference record by two games at 11-1, finishing solidly in their last game of the year. Reimer sees the match against MRU as what it was — a bump in the road.

“It was similar to tonight where the opponent played a lot better on night two and so I’m proud of how we handled it tonight,” said Reimer. “We had much better focus than we did last Saturday when the other team raised their play."

However, the T-birds were effective in holding off the Griffin’s advance and finished off the game in four sets. Fourth-year Juliana Kaufmanis led on attacks with 12 total kills in the game and two service aces, followed by left side Laura MacTaggart who hit nine kills and four aces.

“It is a younger team, but we knew they played very disciplined volleyball,” said Reimer about the McEwan team and his strategy going into the game. “They had a really good power hitter, number 13 [outside hitter Cassidy Kinsella] so we needed to be able to stop her.”

Even though the T-Birds ripped past McEwan in the first game, it was game two that was more remarkable. The ’Birds breezed past the Griffins in the first two sets with set scores at 25-17 and 25-15, but the Griffins fought hard and threatened to come back in the third set. McEwan took the lead and didn’t relinquish it for most of the set as the ’Birds trailed close behind.

This continued until the teams were tied at 18-1, when Danielle Brisebois leapt into the air and sent a streaker past the McEwan defence, putting the T-Birds ahead for the first time in the set at 19-18. From here, the Griffins tried to retaliate and regain their lead, but it was too late and the T-Birds finished off the game with a 25-23 victory in the third set.

The set initially looked like a repeat of the previous weekend where errors and mistakes led the T-Birds to lose the game, but the T-Birds came from behind and completely overtook the Griffins, taking the game in three straight sets.

Danielle Brisebois, who had a meager five kills on the first night, more than made up for it in the second game when she led the attack with 20 kills. Her hitting percentage improved from a negative to a whooping 0.594, holding only one error in the entire game.

“I wouldn’t want to dwell too much on the third set, but we just ran into a few passing issues, so we gave up a few and it just slowed us down,” said Reimer. “A lot of credit for us coming back after that. We did a lot of good things there.”

The team has a six-week break before their next battles. Despite their solid finish this term, they are yet to face the top five teams in the Canada West conference. Those match ups will be the ultimate test for the ’Birds this season.

“Frankly, we have a very difficult second half against a lot of quality teams, so we have to improve. We’ve got to use these six weeks, even though there is exams,” Reimer said. “We just need to put ourselves in good positions to try and challenge for a top playoff spot.”