Conversation: Yoga Rave at the centre of discussion about cultural appropriation 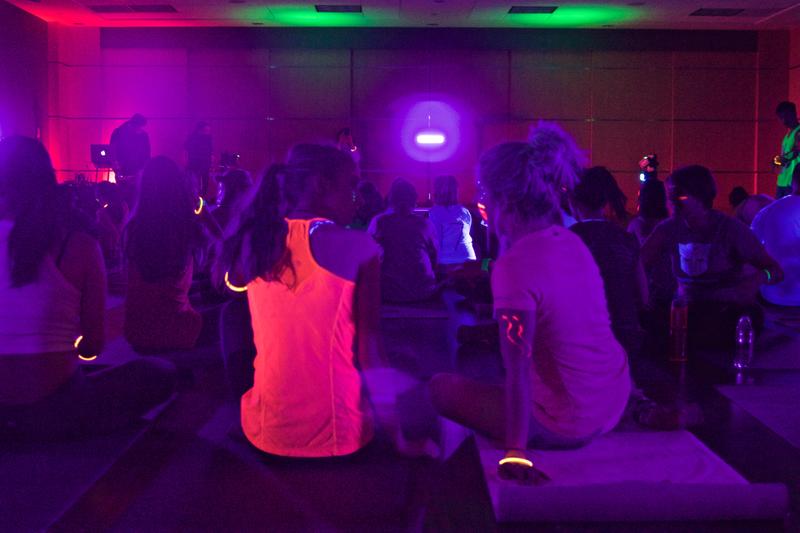 “How do we encourage people to move in an inclusive way … while at the same time recognizing that this is just one facet of what a yoga practice really is?” Koby Michaels

Yoga, especially in a health-centric city like Vancouver, has been a huge of part of mainstream physical activity in North America for many decades. From your fit friend’s blog posts about it, to seeing a yoga studio every few blocks in the Kitsilano area, there’s no denying its popularity.

But yoga is an inherently cultural and spiritual experience. The practice is steeped in South Asian Hinduism and Buddhism, which played a key role during its origins. When UBC Recreation put on a “Yoga Rave” — which consists of a massive yoga class featuring DJs and glow-in-the-dark paint — last month, some students raised concerns.

The original discussion took place on a comment thread within the UBC Needs Feminism Facebook group, where several students voiced their criticism on the nature of the event which has been running for two years. One member suggested that the entire event defeats the purpose of the practice, as it contradicts its meditative and peaceful nature. Others were also concerned about cultural appropriation.

Suzanne Jolly, the manager for physical activity at UBC Rec, has been listening to these concerns. She responded on the thread inviting students to voice any issues directly to them. In an interview with The Ubyssey, Jolly expanded as to what kind of efforts they have taken to avoid pitfalls of appropriation and misrepresentation.

“[Our] discussions originally when it was launched were the concerns about the use of the word ‘rave’ attached to the word ‘yoga’ and how would we promote [an] event that was healthy and avoided substance abuse,” said Jolly, who has acted as the program’s oversight ever since the idea was pitched to her by intramural staff. “But as the development of program continued … we started realizing that people didn’t understand what they would participate in [and] we needed to define it.”

She thought, “How do we encourage people to move in an inclusive way that is low-barrier and fun-oriented … while at the same time recognizing that this is just one facet of what a yoga practice really is?”

Jolly and her team have taken steps to emphasize that above all, the rave has more to do with the physical aspect and that alone. Instructors are briefed to not use any references to prayer poses or use namaste during the event. Social media coordinators and photographers are also trained to make sure they do not perpetuate anything inappropriate online and on-camera.

The dilemma, however, is moderating the participants themselves. Despite their efforts to keep the event as culturally neutral as possible, it is difficult to assert when promoting a fun and open environment as well. Fortunately, there have been no notable incidents in either of the last two raves.

Still, Jolly and her team make efforts to educate people on the cultural and spiritual meanings with things like information boards featuring education material within the venue. Apart from that, it's up to participants to dig deeper.

“Unfortunately … there’s not a lot of opportunities for UBC students to learn about the spiritual and cultural aspect,” said Jolly. “But [the physical aspect] is how they get their eyes open to the rest and who are we to define spiritual meaning?”

For Dr. Adheesh Sathaye, a professor in the department of Asian studies, that just might be the way to go. Although the commodification of physical yoga can be detrimental to its heritage, he agrees that it can become a key window for individuals to further explore and respect that if they choose to, as well as bolster spaces of inclusivity. This is especially considering that the origins of yoga itself are not tethered to any specific belief system.

“Philosophically, it’s not grounded to any one religion. It allows you to practice whatever religion you want. It just shows you one way to do it which is oriented towards the body,” said Sathaye. “I think the way to do it is to differentiate the philosophy from the practice. These are two different histories.”

He also noted that in some ongoing research, yoga may also have predated religion and even before its proliferation in modern Western culture, soldiers in medieval India were possibly already using it for strictly physical purposes.

That said, it only makes the issue of cultural or religious misrepresentation — particularly that of South Asian Hinduism — a much bigger risk, especially when gendering and sexualization also come into play.

“There is misrepresentation that happens because if you see yoga in practice in a studio [and] equate with a religious tradition, it’s a misrepresentation of that tradition that is richer and more grounded in a history that stretches back much further than the studio practice today. You do have to be careful with that,” said Sathaye.

Even taking these contexts into consideration, Jolly noted that there is still room for improving the event’s execution in this respect. Again, she insists that students, whether individuals or groups, keep approaching them on how to do it better, whatever their reasons may be.

“Part of my job is to look at equity and inclusion for Recreation, so I think that the Yoga Rave is in my portfolio for a reason,” she said. “What gaps we need to fill in recreational programming — that’s my job, so we need to bring that forward. We are working really to be more inclusive and social justice-minded.”