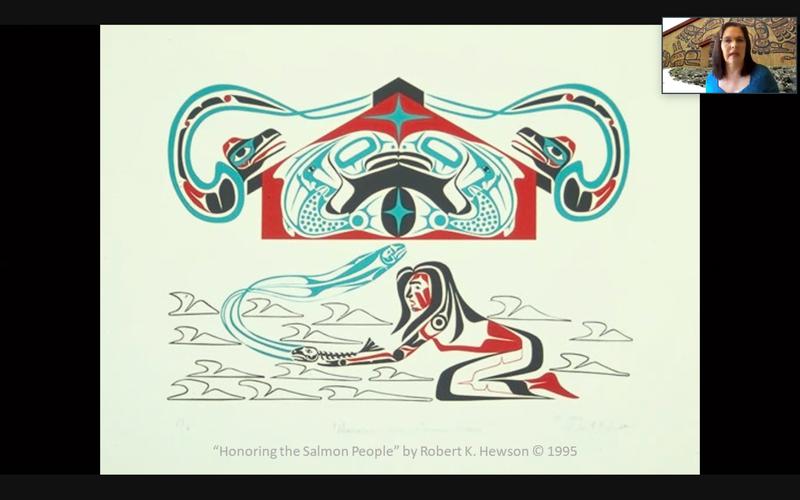 On May 21, a day before UN World Cultural Diversity Day, the UBC Botanical Garden hosted Salmonberry Stories: Signs of Culture in Forest Biological Diversity led by Dr. Sm’hayetsk Teresa Ryan, an Aboriginal fisheries scientist. The talk was a part of the Biodiversity Days series – a series of experiences that highlight the important impact biodiversity on future generations.

Dr. Ryan has integrated her Indigenous ancestral knowledge into her work on salmon fishing technology. She has implemented strategies that are being used in order to increase salmon populations and maintain salmon biological diversity while contributing marine-derived nitrogen to healthy coastal forests.

During this talk, Dr. Ryan underlined the importance of an Indigenous perspective when thinking about forest biodiversity. She started off by emphasizing how Indigenous lands help protect the biodiversity of the area and explaining that members of Indigenous communities carry out stewardship practices by increasing the productivity of these resources. This idea was beautifully explained through interesting concepts such as generosity and reciprocity.

“When you give, there is something that returns to you,” Dr. Ryan said.

This idea was then further developed in the context of salmonberries: when salmonberries blossom, they attract bugs which end up feeding juvenile salmon.

In Dr.Ryan’s culture, salmon bones are returned to the ocean in the belief that they will transform into salmon people. This transformation gives rise to the connection between the physical and spiritual world, and in turn, this connection gives strength and cohesion to their communities. The cyclical nature reminds each member of these communities that they have a role to play in protecting the physical world.

“There are similar types of knowledge systems in other areas of the world, and it's those cultures that should be protected, because they have information about our life here on this planet… how to protect that life, how to cherish it, and make sure that we're looking after the very life support system that we all depend on,” Dr. Ryan said.