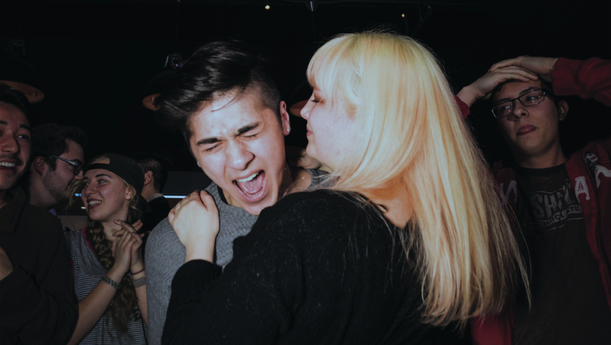 “And I think listening to students, listening to people in general, provides so much information, so much knowledge that it can only be good.” Ryan Neale

After having his headshot “plastered” all over campus for three weeks of intense campaigning, AMS President-Elect Chris Hakim is finally getting over the bizarre experience.

“Every time a student would say, ‘Oh, hey, I recognize you, you’re the guy in the posters,’ I’d feel so embarrassed because I realized my headshot is everywhere,” said Hakim, who is the current AMS VP Administration and also a senator-elect. “But honestly, the fact that they were excited and they’re smiling […] would really get me ramped up.

“You just basically have to because if somebody is just as excited for what you’re doing, you have to somehow be excited by that at the same time.”

And Hakim is excited. Since his first year when he started reading AMS minutes after a Jumpstart friend told him about the student society, he’s seen himself involved in student government — but being president was not something he always thought was in the cards.

Hakim, a third-year arts student, beat out fellow AMS VP Finance Kuol Akuechbeny, as well as newcomers Stuart Clarke, Jas Kullar and Spencer Latu in a race where candidates struggled to differentiate themselves in terms of platform points and instead turned to means and experience.

But Hakim hardly sees this as a problem.

“I would say that a lot of the candidates are also running on very similar topics — you know, divestment, Indigeneity, sexual violence, mental health — that kept coming up. And people were saying, ‘Oh, you know, you’re just all running with the platform. There’s nothing different between you,’” said Hakim.

“But I think that speaks to a different message, which is that these are the issues that students care about the most.”

Hakim’s leadership style is rooted in curiosity. He plans to support each of the executives, some of whom are very new to the AMS — VP External Cristina Ilnitchi is the only other incumbent remaining on the executive — but he also wants to keep in mind his roots at home and why he joined the AMS in the first place.

“I remember growing up in high school in Jordan ... I had very strong feelings when it came to the refugee crisis [so] I started working with humanitarian organizations and refugee camps to see how to help,” said Hakim. When he got to UBC, his friends shared similar concerns to him about how the AMS and UBC were doing things, but he noticed many more serious concerns weren’t being addressed at all.

“Our approach should always be, as a student union, to be working with our students,” said Hakim. “And I think listening to students, listening to people in general, provides so much information, so much knowledge that it can only be good.”

Hakim’s curiosity on these issues — and on changing the AMS itself — has helped him work on his own knowledge gaps. This past year, Hakim was part of the executive that decided to cut the support services at the AMS Sexual Assault Support Centre, a decision which was later reversed after intense community backlash.

“As much as I am an anti-sexual violence advocate, I'll be honest, if you asked me like, a few years ago, I probably would not know too much about sexual violence,” said Hakim. “Being able to slowly learn what it's like to provide that support for each unique experience is something so key that I believe every institution be, should be prepared to do. And that's something that I've been really trying to emphasize and learn.”

As VP Administration, Hakim has had a central role in the creation of the AMS’s own internal sexual violence prevention and response policy, which is currently out for consultation with students. But as president, he wants to bring his level of work from the system to the student-level to continue advocacy for survivors and reconciliation within the AMS and UBC.

It’s no wonder he does. As a first-year student who grew up in Jordan and the Middle East but who is also a Canadian citizen, Hakim was immediately struck by the scale of UBC and the AMS itself. And after an election where all candidates for president and four of five original candidates for the Board of Governors were men, Hakim wants to make sure everyone can see themselves in the AMS in the way that he did in those first few weeks.

“I remember seeing [former AMS President] Ava Nasiri on stage at Imagine Day. And then just like seeing sort of like the extent that students are willing to go for other students,” said Hakim. “It was just so inspiring to me that I just wanted to be able to do the same thing for students as well.”

Hakim praises the work of current President Marium Hamid on “fixing a structure that has been broken for years.” Now, he wants to look at what the society can do better to encourage people of all genders and backgrounds to see themselves in the society.

“The issue of representation, whether it comes from women or other marginalized communities, it’s something that is pre-balanced, not through our executives or elections, but more so our councils or committees or management,” he said. Hakim cracked eggs for breakfast in the background of his interview with The Ubyssey, a well-timed metaphor for his approach to complacency.

“We need to understand, you know, where we lack and how we can improve because we can ... keep staring a problem in the eye, [but] it's about time that some changes are made.”