At 100 Debates on the Environment, Vancouver Quadra candidates delve into climate policy 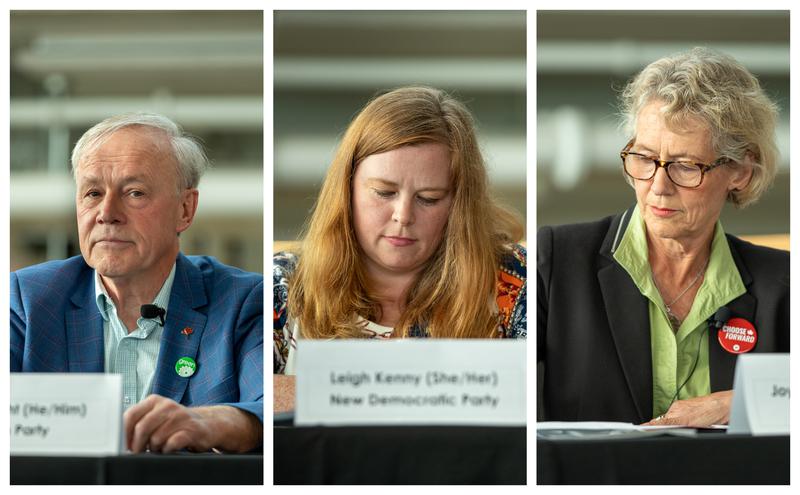 Questions came from 100 Debates, as well as the local organizers of the debate and debate attendees. Zubair Hirji

Dr. Simon Donner from the UBC geography department moderated the debate between Leigh Kenny of the New Democratic Party (NDP), Joyce Murray of the Liberal Party and Geoff Wright of the Green Party.

Conservative Party candidate Kathleen Dixon did not attend because she felt that the debate was biased against her party.

“100 Debates is a project of GreenPAC, who endorsed my opponent in advance of the debate - an ethically questionable approach,” she wrote in a statement to The Ubyssey.

After brief opening remarks, Donner asked the candidates a series of questions on the broad issue of environment, which came from 100 Debates, the local debate organizers and debate attendees.

On multiple points, candidates appeared to have similar platforms.

All candidates discussed their respective party’s pledge to create more protected areas and lowering greenhouse gas emissions. Both Wright and Kenny voiced support for strengthening the Environmental Protection Act and recognizing the right to a healthy environment in the Canadian constitution.

All candidates also spoke of the importance of Indigenous voices in addressing environmental issues and the need for a just transition to a green economy.

But the candidates also tried to remind voters of what made their party unique.

Murray cited the Liberal Party’s implementation of pollution pricing as evidence of their commitment to the environment.

“[Liberals] have accomplished three quarters of the distance to our 2030 target with the policies that we are putting in place now,” she said.

“The NDP’s Green New Deal will take an ambitious, science-based greenhouse gas reduction target plan that will help to stabilize global temperature … We will ensure accountability by creating [a] climate accountability office who will do regular audits to make sure targets are met.”

The debate was civil throughout, but the most divisive issue that night was the Trans Mountain Pipeline. Wright questioned the Liberal’s decision to purchase the pipeline.

“If water is so precious, why are we having a pipeline that’s going to be shipping diluted bitumen across the ocean?” he asked.

Later in the evening, Murray cautiously defended the pipeline.

“You know I was not in favour of that pipeline and in fact advocated between the government and the prime minister not to build it,” said Murray.

“[But] there has been a pipeline there … for 50 years … and we responded to [the people’s] concerns because we share them … What we’ve done is to bring in a historic ocean protection plan to improve prevention, to address risk to whales.”

In closing remarks, the candidates outlined their party’s environmental platforms.

Wright focused on the Green plan to transition to a green economy. Kenny emphasized choice in the coming election, saying that there is an alternative to Liberals or Conservatives. Murray used her closing remarks to tell voters that hoping for a minority government “is a very dangerous gamble.”

The debate ended with a reminder that 100 Debates is nonpartisan.

—with files from Charlotte Alden