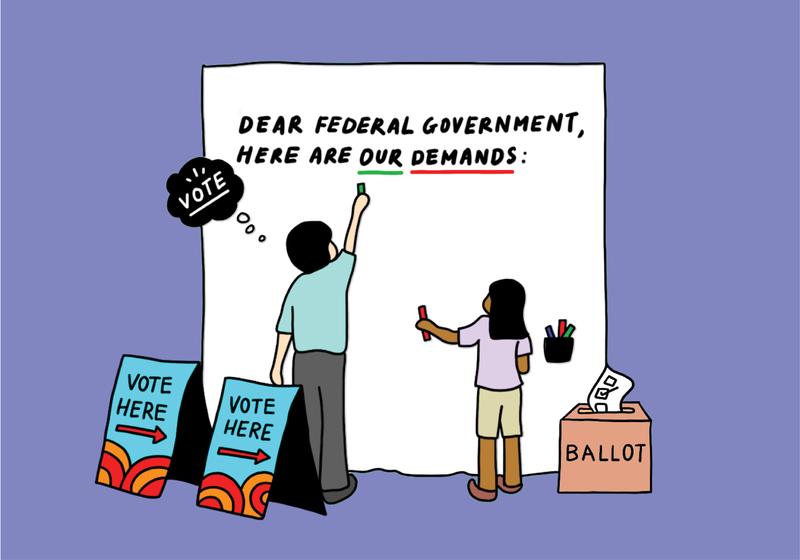 “Our focus right now is to ensure that every single student that is eligible to vote can go vote.” Rachel Cheang

In anticipation of the upcoming federal election, the AMS and student unions across Canada have published a letter calling on the federal parties to address student concerns as part of their campaign platforms.

The National Student Letter asks the parties to deliver on issues including affordability, jobs and support for Indigenous students. The letter was co-signed by 48 student associations representing roughly 900,000 post-secondary students.

“The federal election is such a critical opportunity to ensure that student voices are heard,” said AMS VP External Cristina Ilnitchi.

In particular, the student groups are inviting the parties to take action by eliminating interest on federal student loans and increasing post-secondary grants. Second, they’re asking for better work opportunities that include a pathway to permanent residency for international students.

The third priority is to end what the letter refers to as the “backlog” of Indigenous students who face barriers to post-secondary education due to a lack of funding.

“We will be voting with these commitments, based on important student priorities, in mind,” the letter reads.

Student groups hope to leverage the youth vote in a year where Canadians under 35 will make up the country’s biggest age group of voters, representing 37 per cent of the electorate.

The BC Federation of Students (BCFS), which represents 13 student unions — excluding the AMS — published a report which outlines the shifting demographic trends that will put young voters in a powerful position come election day.

According to Elections Canada, youth voter turnout increased by 18.3 per cent among voters aged 18 to 24 in 2015.

“We’re really trying to cut through … those stereotypes, and show that there’s actually data to support this,” they said.

Ilnitchi said the letter received a “generally supportive” response from the Liberal and NDP parties.

The Ubyssey reached out to the Liberal, NDP, Green and Conservative parties for comment, but did not receive a response by press time.

“Students are engaged more than ever. They want to vote, and the AMS is really excited to support increased youth voter turnout and use that momentum to push our asks hard when we start working with the new government,” Ilnitchi said.

But now that the federal election campaign is officially underway, student leaders are also working to mobilize voters on campus.

The AMS is gearing up for its UBC Votes 2019 campaign to help students navigate their voting options come October 21. Besides posters, classroom announcements and debate viewing parties, there will be a dedicated polling booth in the Nest administered by Elections Canada.

From October 5 to 9, students, staff and faculty can vote at the polling station regardless of where in the country their home riding is.

“Our focus right now is to ensure that every single student that is eligible to vote can go vote,” said Ilnitchi.

“Young people do vote,” said Klassen. “When young people get together, they can make a lot of noise and they can really make a difference.”