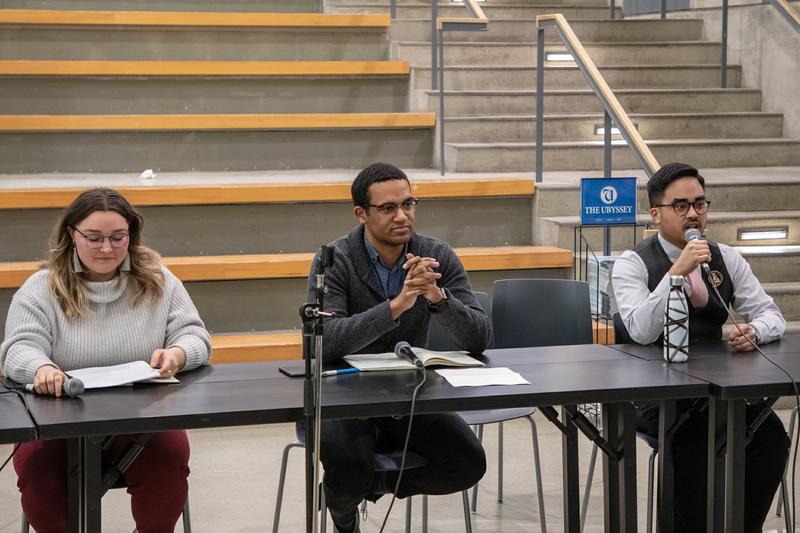 While candidates often had similar answers to questions, they squabbled over their past experiences throughout the debate. Zubair Hirji

On Friday night, VP External candidates clashed in their last debate in this year’s elections.

While candidates often had similar answers to questions, they squabbled over their past experiences throughout the debate. And while Ilnitchi was quick to claim credit for previous VP External wins, Ty was just as fast to bring up the office’s mistakes in the past year — when Ilnitchi and Shelling worked together as VP and Associate VP.

The debate started with a question on whether the AMS should have a seat on the University Neighbourhoods Association (UNA). All three candidates answered yes.

Ty said the AMS must work with the UNA to address student housing concerns.

“Our voice needs to be heard,” he said.

Shelling and Ilnitchi both mentioned that since students are a minority group in the UNA, they need representation on the board.

Shelling added that with the proposed Skytrain extension to UBC, student voices are needed to highlight the importance of this extension to students and to promote affordable housing. Since student dollars are given to the UNA, he believes that they deserve representation on the board.

But according to Ilnitchi, actual representation needs to go beyond just having one seat on the board of the UNA.

“Actual inclusion looks like student voices being represented at committees and throughout consultations, because currently that is not happening,” said Ilnitchi. She mentioned that she is already fighting for this goal in her current position as incumbent VP External.

“I’m wondering how you will address that moving forward since you both work on the portfolio when these issues occurred,” Ty challenged his opponents.

In response, Ilnitchi acknowledged that improper Indigenous consultation was a mistake — and that moving forward, she is taking a “proactive stance” on improving in this respect.

Shelling shot back at Ty by challenging his record of accountability, given that he voted against censuring the AGM executives last October, one of whom was Ilnitchi.

Ty later defended his “active stance” on holding executives accountable through the advocacy committee, which he pointed out Shelling had never attended.

In the next round, candidates debated the introduction of ride-sharing services in Vancouver. While advocating for ride-sharing is a part of Ty’s platform, both Ilnitchi and Shelling raised concerns about bringing it to UBC.

Shelling said that while he supports ride-share, it needs to be implemented with careful consideration of its environmental and economic impact.

Ilnitchi described ride-share as a “poor solution” to the accessibility and transportation problems faced by students. She brought up her experience lobbying with mayors and city councillors to fight for transit needs, and that she will continue to push for more night busses to address this issue.

In the debate section, Ty and Ilnitchi argued over the use of testimonials in collecting evidence. While Ty referred to them as “the worst proofs of evidence,” Ilnitchi challenged this point and said that testimonials were a very effective way of lobbying in the VP External position.

The third question asked candidates whether or not they would push to endorse a federal candidate in the upcoming election cycle.

All candidates said that they would not.

“We need to be practical and work with whoever is in office,” Ty said. “I can’t specifically endorse a candidate, but I will plan to deal with all of them effectively.”

Shelling stressed that the AMS should remain non-partisan on this issue. Ilnitchi echoed his statement, saying that it is “detrimental to be partisan.”

Shelling challenged Ty’s claim that he would bring federal candidates to UBC, saying that it is not feasible to bring them on campus. Ty defended his point by noting that Minister of Defence Harjit Saijan is visiting next week. The minister of Oceans and Fisheries also visited UBC last month.

An audience member asked the candidates how they would approach issues such as implementing ride-share to ensure that it benefits students in the long term.

Ty said he would reach out to students via a Reddit megathread, amongst other venues, to consult them. Ilnitchi mentioned that she would provide in-depth information to students first, while once again bringing up her experience in community consultation.

An AMS Councillor then posed a question to candidates on whether they would consider joining provincial student union groups. Ilnitchi answered no, although she would strengthen the AMS’s relationship with these groups. Shelling said that he would consult students first before making a decision.

In his closing speech, amidst multiple Game of Thrones references, Ty mentioned that students should not vote for candidates just because they are currently on the portfolio for which they are running. He reiterated his campaign platform and encouraged students to vote.

Shelling stressed that “no one in [the VP External] office works alone,” hinting at Ilnitchi’s multiple reprisals of her work as VP External throughout this debate. Shelling mentioned that he was involved and contributed to the portfolio’s advocacy efforts in the past year.

Ilnitchi closed the debate by pointing out that Ty had never been involved with or contacted the VP External portfolio, or engaged with its campaigns. She stressed her experience in dealing with pushback and engaging in strong advocacy one final time.