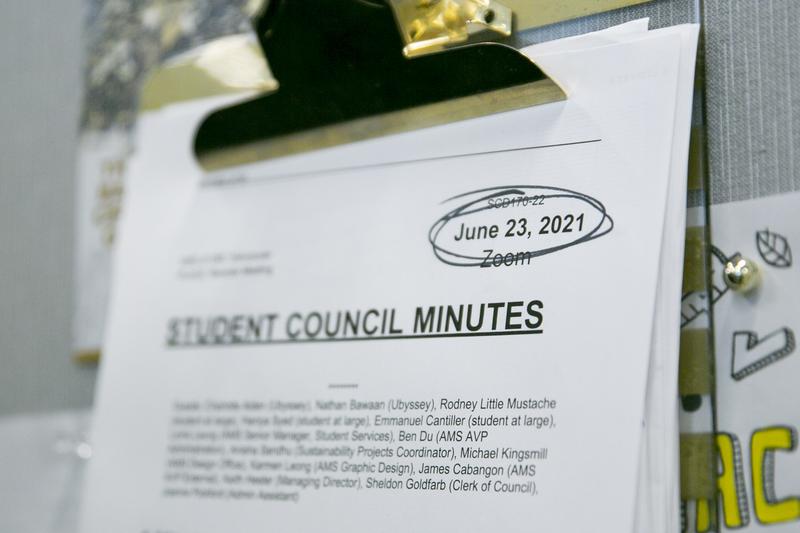 “I think our team is doing their best to get these documents finalized as quick as possible,” Evans said. Andrew Ha

Minutes from AMS Council have not been posted on the AMS website since June of this year.

Minutes not only provide a public record of these discussions but also record councillor votes. Since the start of the pandemic, councillors have voted on OnBoard, an online platform, which is not accessible to those outside the AMS — making minutes the only place the public can find how people voted on different motions.

Currently, the only public records of the summer AMS Council meetings come from The Ubyssey’s coverage on Twitter and website, as well as AMS Council summaries produced by the student society.

At the October 27 Council meeting, councillors approved the meeting minutes from the July 21 and August 4 meetings, but these minutes have still not been posted on the website.

Typically, it takes six to eight weeks for Council minutes to be published on the AMS website, according to an estimate from AMS President Cole Evans. He attributed the delay in posting summer minutes to the fact that the AMS Archivist Sheldon Goldfarb is simply behind schedule.

“But other than that, I don’t think there’s any other major reason why the minutes haven’t come sooner,” Evans said.

The AMS is planning to have the meeting minutes from July — and potentially August — posted as soon as this week. “I think our team is doing their best to get these documents finalized as quick as possible,” Evans said.

Evans added that the meeting minutes are large documents that take time to finalize. The June 23 Council minutes document was 35 pages long, June 2 was 16 pages, May 12 was 14 and April 28 was 28.

“We’re not too behind schedule,” Evans said.

In response to an interview request from The Ubyssey to speak with Goldfarb, Eric Lowe, senior marketing and communications manager at the AMS, said in an email that Goldfarb is aware that he is behind and is “getting through them as quickly as he can.”

“They do take some time to produce, so it’s not unusual for there to be a gap of 3 months or so between the meeting and the minutes being posted. There will be two sets of minutes for council to approve at the next meeting, so he’s chipping away at it.”

UBC’s Senate has also been slow to upload its monthly committee meeting minutes. Despite making promises to be more prompt with this task, this hasn’t been done since March 2021.