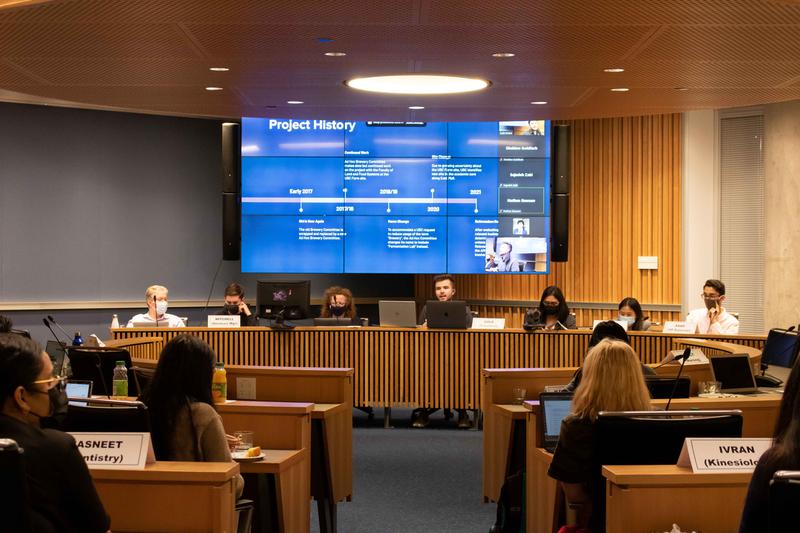 During its six-hour meeting on Wednesday night, AMS Council approved an early version of its Equity Action Plan and discussed how to improve student safety along NW Marine Drive.

After a few years of preliminary work, President Cole Evans brought an almost complete draft of the Equity Action Plan to Council for approval.

Evans said in the past, equity and diversity had been “siloed” into various portfolios and that they hadn’t had a central plan students engaged with.

The development of the plan included guidance by execs, involvement of AMS Council, focus groups, a survey, an environmental scan and a focus on education.

In terms of timing, Evans said the team would come to Council with finalized goals for the Equity Action Plan in October or November; they would finalize implementation in the winter; and in the spring, they’ll bring the revised plan in for approval.

Graduate Student Society representative Julia Burnham emphasized the need for buy-in across the society to ensure this plan outlives the people who created it.

“For its success, we need all of our execs, senior managers to look at this document, and say, ‘Where does this fit [in my portfolio]?” she said.

On long-term continuity, Evans and Wallace spoke on hiring a potential permanent staff member on equity sometime in the future.

Council voted to accept the report and adopt the AMS Equity Action Plan as a strategic plan.

Council also talked about ways to make NW Marine Drive safer for students after a driver killed two student pedestrians over the weekend.

“It’s next to the ocean and the residences, and it’s totally dark. There’s only one red light next to Wreck Beach, and that’s it,” Mishra said.

Mishra, Hajizadeh and others suggested that more streetlights and speed bumps be added to the road, as well as addressing the dramatic speed limit change — which goes from 80 km per hour to 40 km per hour over a short distance.

Burnham and Georgia Yee noted that concerns around safety along NW Marine Drive and other roads near UBC have been an issue in the past. Yee added that she is worried jurisdictional issues might slow down any improvements.

“That might be something to make sure there is accountability [for] ... because when I brought this up in previous roles, like the Residence Hall Association, it kept getting bounced back to ‘Is this a City of Vancouver thing?,’ ‘Is this a [University Endowment Lands] thing?’”

VP External Saad Shoaib said the province was looking into improving the road — NW Marine Drive is under the jurisdiction of the BC Ministry of Transportation — but that any further lobbying would need to wait for the RCMP investigation to finish.

“There are just certain variables that we need to wait for in order for us to actively lobby the province on this,” he said. Shoaib later clarified that his office would wait for the investigation in order to better align its lobbying priorities with UBC’s.

Meanwhile, VP Academic & University Affairs Eshana Bhangu said her office’s advocacy to UBC on this issue was not dependent on the RCMP investigation.

“That is an unsafe area, period. And that is what is going to be coming across [during advocacy],” she said.