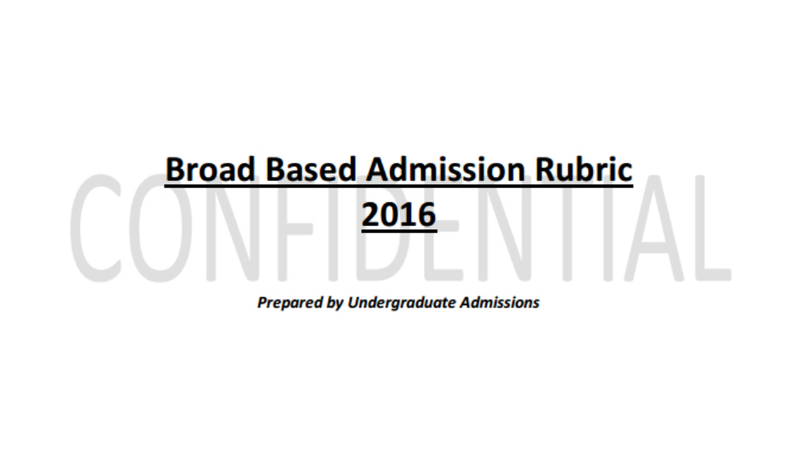 UBC is looking for leaders and with a strong sense of self and community who take initiative, according to its marking rubric for admission essays.

The university has refused to comply with the BC Supreme Court and Information and Privacy orders to release the rubric, which The Ubyssey requested via the Freedom of Information and Protection of Privacy Act four years ago. It was provided to the paper by a person who wishes to remain anonymous due to the confidential nature of the document.

Read the rubric in its entirety here.

The rubric asks graders to mark essays based on how well they display certain attributes. In approximately 1,000 words, the ideal applicant would have a sense of self and community, problem solving and resilience, intellectual readiness and expression, leadership and initiative, and achieving goals.

Each attribute gets its own page to let graders know exactly what to look for in applicants’ essays. For example, the leadership page lists complimentary adjectives that could describe a leader — e.g., “focused,” “confident,” “influential” — and some examples of situations that could demonstrate leadership ability — e.g., “ability to motivate and inspire others.”

To grade the application, each of the listed attributes are ranked on a scale from 0 to 5. Detailed descriptions of how answers might exemplify each rating can be found on each attribute’s page of the document.

Among other considerations, markers are told to take into account each applicant’s age and potential access to opportunities, and to flag areas of concern, such as mental health or other circumstances which may require additional support. Flagging an application, according to the rubric, has no effect on the chances a student will get in.

Markers are instructed not to take grammar, punctuation and spelling into account when grading an applicant’s submission.

“You should be focused on the thoughts and intentions of the applicant’s responses. For instance, you should not penalize applicants for using an incorrect verb or tense,” the rubric says, noting that English dialects vary between Canadian and worldwide communities.

According to UBC Director of Undergraduate Admissions Andrew Arida, the rubric is updated on a yearly basis “as the university seeks to enhance the process.”

Arida said that an average of 75 to 80 per cent of the decision to admit someone to UBC is still solely reliant on grades. Somewhere between one in five and one in ten students would not be admitted without the broad-based admissions process.

“It depends on the faculty and how competitive the program is and the introduction of other admission policies,” he wrote in an emailed statement.

UBC’s opinion vs. the BC Supreme Court’s

The Ubyssey has pursued UBC’s rubrics for how broad-based admissions (BBA) are graded for the past four years.

One of the initial reasons the university rejected our freedom of information (FOI) request cited the section of the Freedom of Information and Protection of Privacy Act that deals with “disclosure harmful to the financial or economic interests of a public body.”

Implementing broad-based admissions cost UBC about $1.76 million, according to Arida.

“There would be cost associated with amending the system to ensure it remains viable if the rubric is released. The cost of returning to grades-only would be substantial. However, the cost to the student body, to its diversity and to those who might not otherwise have a chance to pursue their studies has an impact that cannot be measured in dollars. There is a huge lost opportunity cost because it would reduce access to UBC,” he said.

Judge Loryl Russell, in the section of her BC Supreme Court decision that dealt specifically with that claim, wrote that “it is clear that the BBA process is not like an exam where a student must demonstrate their knowledge of the concepts taught by an educational institution, and where maintaining the secrecy of the questions and answers is essential to the fairness and integrity of the testing.” UBC appealed this decision.

“Even if it were reasonable to conclude that disclosure of the rubrics necessitates abandoning the BBA process ... UBC did not provide information that satisfies me that this could reasonably be expected to harm its financial or economic interests,” wrote Russell.

UBC Director of Public Affairs Susan Danard wrote in an emailed statement that “releasing the BBA application scoring guides would allow prospective students to tailor their answers and exaggerate or misrepresent their experiences to meet UBC’s requirements, which would seriously harm the ability of the university to evaluate applicants fairly.”

The email also noted that The Ubyssey is publishing these documents “at [our] own risk.”

Russell wrote: “Given the nature of the information in these rubrics, I am not convinced that disclosure would make exaggeration, misrepresentation or false information any more prevalent or harder to detect than they currently are. Therefore, I do not accept that it is reasonable to believe, as UBC does, that disclosure of the rubrics would significantly diminish the predictive value of the BBA process, and that the only alternative is to abandon the BBA process.”

This article has been updated to clarify the fact that flagging an application, according to the rubric, has no effect on the chances a student will get in.