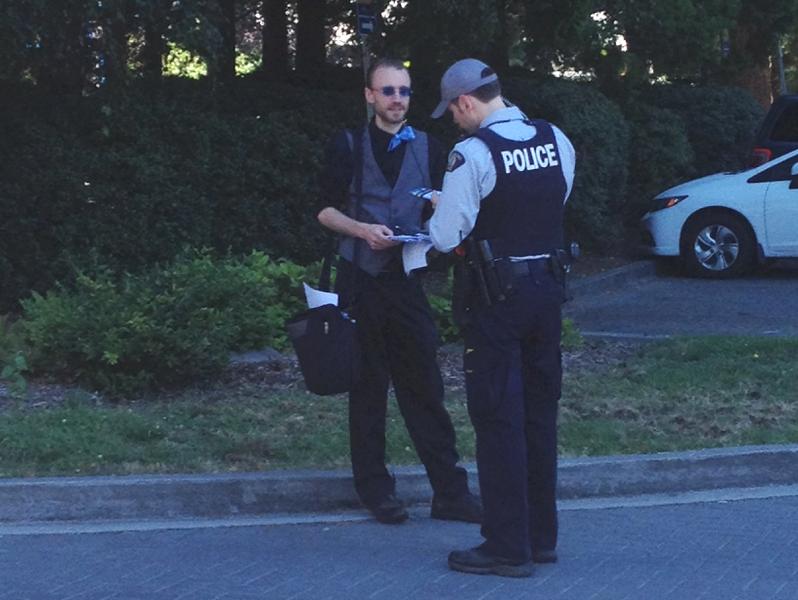 A student who said he has distributed hundreds of letters preaching the value of free speech and debate at UBC found himself Sunday in a tête-à-tête with the RCMP.

After causing a stir by slipping the note under the doors of professors across campus, fourth-year philosophy major Franz Kurtzke took his message to at least two UBC campus residences.

St. John’s College (SJC) resident Gil Henriques said in an email to The Ubyssey that he called campus security as he noticed Kurtzke leaving the building. He took a photo of Kurtzke speaking with an RCMP officer. Kurtzke confirmed via email that it was indeed him in the photo.

“I felt absolutely furious when I first noticed that he had been distributing his memo in our home,” Henriques wrote.

He said Kurtzke told police that “the door was open,” which he found concerning since the doors at St. John’s close and lock automatically.

Alt-right posters now left overnight at our doors where we live at @GreenCollegeUBC. Shaking with rage. @UBC this is unacceptable pic.twitter.com/X8g3VUXayH

“We try very hard to cultivate a safe and inclusive culture at SJC, and him breaking into where people live threatens the integrity of that atmosphere and, frankly, it threatens the very idea of safety that is associated to any living place,” Henriques wrote in an email to The Ubyssey. “Several residents have told me that they feel unsafe that a person whose values are so contrary to ours was able to intrude into our residence uninvited.”

He also said campus security and the RCMP have told Kurtzke not to enter locked residential areas again.

Kurtzke refused to speak to The Ubyssey due to the paper’s previous characterization of readings in his letter as “right wing” — and didn’t answer questions about whether he has entered other residences without permission or how he managed to get into St. John’s — but said in an email that he planned to stay within the law from now on.

“I found the officer reasonable, pleasant, and I appreciated the opportunity to practice my French with him; henceforth I will be careful to follow the rules ‘à la lettre,’” Kurtzke wrote, adding that he was curious how many "philosophy-related incidents" the RCMP receives.

In response to these incidents, Senior Advisor to the Provosts on Academic Freedom Dr. Neil Guppy issued an emailed statement to The Ubyssey acknowledging the security concerns raised by the residents.

“We are aware of concerns expressed by faculty and students who have received the leaflets under their door in residence and the negative impact on their living environment,” read his statement.

“University residences are a personal living and learning space where occupants have the right to privacy and personal security. Door to door leafletting is not permitted in residence. Conduct or communications that may be acceptable in another context may not be acceptable in a students’ residential environment.”

At the same time, he expressed the need to respect both free speech and safety.

“Academic freedom and the free expression of opinions are rights that are paramount at UBC,” continues the statement. “All students, faculty and staff are expected to abide by UBC’s Respectful Environment statement. Students, faculty or staff who have safety concerns should contact Campus Security or the RCMP.”

The RCMP did not immediately respond to a request for comment. This article will be updated once the comment becomes available.

This article has been updated to include Dr. Guppy’s statement.