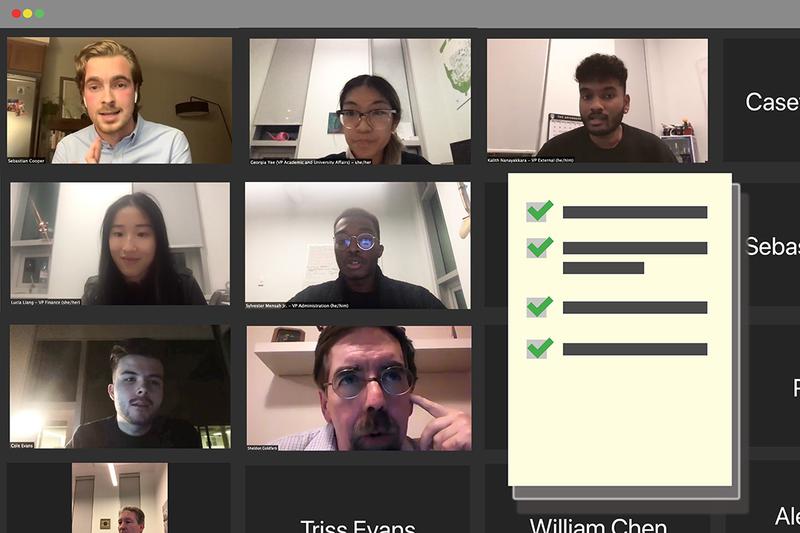 Evans said he believes the proposals will not have any negative impact on students. File Jasmine Foong

Part of the reason they attended this year was the online format, which students complimented for its accessibility. But the other reason they attended was because of the AMS’s plan to pass bylaw changes that had failed three times over the last two years in referendums.

“I was concerned that [at an] AGM you only need two-thirds of 580 people to vote ‘yes,’ and it seemed to me a bit concerning that the AMS was going to deliberately take this as a way to get something passed more easily,” Broughton said.

Held on October 29, this year’s AMS AGM hit quorum for the first time since 2014 (after not meeting quorum for 40 years prior), but Broughton wasn’t alone in their concerns about the event. Throughout the night, students asked pointed questions to the society about the ethics of the different proposals and changes, with questions remaining even after the meeting ended.

All eyes were on the bylaw changes, many of which had failed to meet previous referendum quorum requirements.

In referendums, bylaw changes need over 4,500 ‘yes’ votes in order to pass. At the AGM, all of the changes passed with between 600 and 900 votes in favour.

“I would feel a lot more guilty if all the votes came down to 68 per cent in favour, 32 per cent against and they were razor thin. But again, these votes are pretty overwhelming in favour of these on these motions.”

The records bylaw change was of most concern, and passed with the closest margin of the night. 671 students voted in favour, making it only a few percentage points above the needed threshold of two-thirds.

The change allows Council to create a policy to designate records confidential where their disclosure “would be harmful to the financial or economic interests of the Society, the security of the Society’s buildings or its computer or communications systems” or “disrupt an ongoing investigation, violate solicitor-client privilege, or reveal in camera discussions.”

Due to past criticism over transparency, the governance committee reworded the change for the AGM.

Evans said the rewording of the bylaw change “made it very black and white as to what are the materials that can actually be kept confidential.”

PhD student Victor Bradley Bednar disagreed, saying the wording was still vague. He expressed concern that this was only one example of the society requiring less reporting, along with the elimination of the need for annual financial reports for clubs.

“Now it seems, from my understanding, that [the AMS] basically can just have some really loose wording for how they can reject people's requests now as to whether or not they want to provide them with the information they requested,” Bednar said.

Broughton, who didn’t have a chance to speak on the motion before it came to a vote, said they voted against the change despite appreciating the tightening of the motion’s language.

“I think that, placing the financial interests of the society … above their duty of transparency to the students is in my opinion concerning,” Broughton said.

Evans said he believes the bylaw changes will not have any negative impact on students.

“I think that while there’s some initial hesitancy with anything to do with transparency, I think that in the coming months and in the coming years, students are going to realize that this is not as significant of a change as some people think,” he said.

Broughton also criticized the society’s overt focus on prizes to get students to attend, saying that the AMS was promoting the AGM with the lure of prize money instead of for care of student government.

Attendees were able to enter the prize draw after the records bylaw motion — which marked the midway point of the meeting — was voted on.

Throughout that preceding motion, attendees repeatedly ‘called the motion to question’ which, if passed, cuts discussion short and begins the vote immediately. Broughton, Bednar and Max Oldendorff, a fourth-year political science and economics student, said this was likely because those who were present for the prize draw wanted to accelerate the meeting.

“I think that it’s telling that they deliberately scheduled this such that there was every motivation to push [the records bylaw change] through as quickly as possible,” Broughton said, also adding that the AMS underestimated the amount of time students would want to discuss the bylaw changes. The agenda budgeted only an hour for the meeting, which ran for over three hours.

Broughton also said that if the AMS “genuinely [cared] about student engagement,” the society would have put the gift card giveaway at the very end of the meeting.

On the AGM agenda, Evans said the executives contemplated where to place the prize draw.

“We thought that if people stay halfway through the AGM, then that is a fair indicator they’ve invested their time ... listen[ed] to what’s important, and be able to make a decision for themselves,” Evans said.

The number of attendees started to fall during the president’s remarks and plummeted during the VP finance’s soon after the prize draw’s entry was complete. Evans clarified that only 10 to 20 per cent of people dropped off right after the prize draw entry and many people stuck around for a little bit longer. At its peak, the AGM had over 1,400 attendees, falling below the quorum of 583 by the last motion.

Oldendorff said the nosedive of students after the prize draw showed that “people don’t really care about the AGM.”

“The executives clearly knew that many people were there for the prize draw. So that hadn't escaped them and you just gotta wonder if no one asked themselves, ‘Hey, is this a responsible way to really gauge what this school body thinks about these amendments?’” he said.

Evans agreed there wasn’t enough time scheduled for discussion, but opposed the idea that students were voting or asking to call to question only for the prize draw.

“I think that UBC students are very intelligent. UBC students have a long history of being able to make smart decisions for themselves and for the community,” Evans said, adding that people who attended had no requirement to vote.

— With files from Andrew Ha