‘UBC is strongly and clearly against Islamophobia’: Ono speaks to campus’s Muslim community 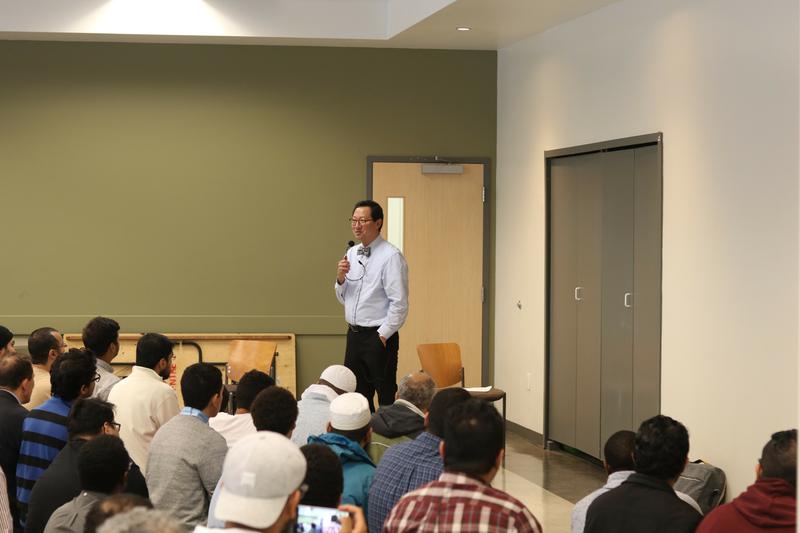 Ono joined in time for the start of the weekly sermon and spoke to the audience after the prayers concluded. Zubair Hirji

On Friday September 29, President Santa Ono gave his second address to the UBC’s Muslim community since assuming his role at the university.

Ono joined in time for the start of the weekly sermon in the Totem Park residence’s ballroom — which was temporarily transformed with an acoustic system and embroidered prayer rugs for tens of students, staff and faculty — and spoke to the audience after the prayers concluded.

Having participated in a Facebook Live session on mental health the same morning, he picked up from the sermon’s theme of kindness to highlight the role of community in fostering mental well-being.

“It is not easy to navigate the challenges of travelling far away from home and dealing with the stresses of a competitive environment,” he said. “Some of the most pressing challenges don’t appear on the surface, so I encourage you to apply the faith’s message of kindness to those who are most in need even if they don’t display tell-tale signs of poor mental well-being.”

Beyond mental health, Ono addressed the importance of protecting diversity, especially in the climate of rising Islamophobia.

“One of UBC’s biggest strength is diversity — we have people with and without faith — but you only realize its strength when you embrace the concept,” said Ono in his talk. “Today, there are powerful forces that run counter to the principles that are bedrock of both Islam and UBC ... The travel ban south to our border is coming back and forth, but UBC is committed to being strongly and clearly against Islamophobia.

“I will keep an eye on that and stay true to UBC being the kind of university where people, regardless of their belief, will be welcome.”

The talk then continued with a discussion on the intersection of faith and academia.

“Faith and academia are crucial drivers of human nature and philosophy, and I believe it is important for even secular educational institutions to study the role of religions,” he said. “It is also important on an individual level for many students, staff and faculty members.

“And while I cannot promote one religious group over another, I’m supportive of giving all UBC members an opportunity to observe their faith and create an atmosphere of mutual respect.”

In particular, this freedom to observe religious practice and express religious identity is both a flashpoint and a key conversation driver in Muslim circles. Professor Dr. Maged Senbel, the Muslim representative on the UBC chaplaincy, noted that while most challenges in a university cut across faiths, many are unique to Muslim students.

“For instance, women who wear the hijab are very visible, and in a university setting where there is often an unspoken bias against religion, they can be ostracized or alienated,” he said. “This applies to other less ‘visible’ Muslims as soon as they make their Muslim identities known.”

To Senbel, Ono’s vocal support is therefore a timely reassurance of the university’s support for the Muslim community.

“It is self-affirming when the most senior person at the University acknowledges them as Muslims and addresses them as Muslims,” he said. “It reinforces that their Muslim identity is welcomed and valued by the university, and that is a very powerful and empowering message for students.”

“What was great about the talk was that he commented on the sermon and complemented it with some of his own universal messages,” Mohamoud said. “He wasn’t here simply to make his support visible, but provided his advice on a cross-section of topics from mental health to UBC’s stance on diversity.

“Importantly, he also pledged support for larger praying facilities in the campus, which is the need of the hour considering the growing Muslim community on campus.”