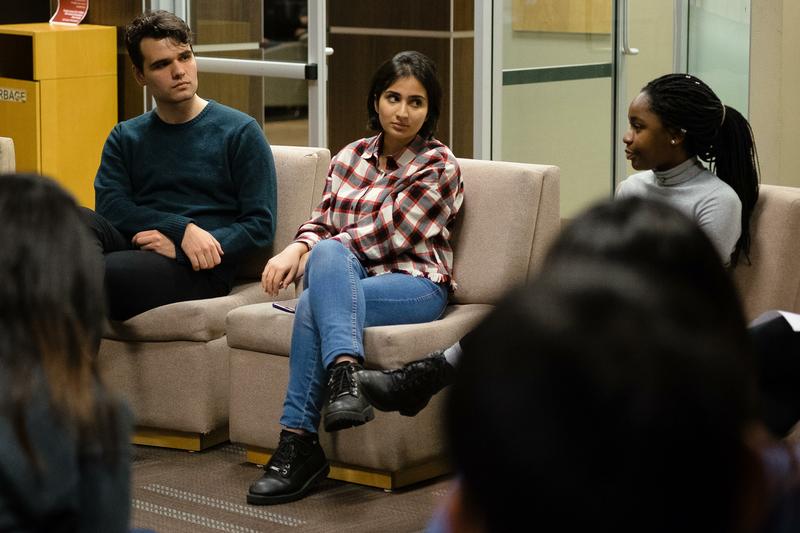 On Tuesday evening, UBC’s Equity Ambassadors — a social justice group managed by UBC’s Equity and Inclusion Office — held “Sex in All Languages,” an event where different sex-related topics were discussed across various cultural viewpoints. The workshop was the final event of UBC’s Sexual Assault Awareness Month.

“Through this event, we hope to get different pictures of how stuff like virginity, sexuality and LGBTQ+ issues were brought up … in different cultures and how we can move forward to create really fulfilling dialogues in the future,” said Alex Dye, a member of the Equity Ambassadors.

Yi Lin Huang, a supervisor for the Equity Ambassadors, explained that although the event focused on discussing the cultural perspectives of sex, it also aimed to look at other important factors as well.

“We want to take an intersectional perspective,” said Huang. “We want to see how race, gender, sexuality, ability, disability and education level, how that all affects your experience of sex.”

The panelists first discussed their first experiences learning about sex, where a conversation took place about how sex education classes in different cultures were limited to heterosexual ideas and lacked the means to allow a healthy exploration of sexuality. The discussion then moved on to how different cultures understand consent. Two of the panelists explained how the idea of consent is a problem in their cultural backgrounds because it is interpreted from the way someone dressed.

The panel then carried on the discussion to LGBTQ+ issues in different cultures. One panelist provided the audience with some historical insight into India’s anti-homosexuality sentiment, which he said only existed after the country’s British colonization.

They also discussed relationships. Many of the panelists shared their experiences of how their family, relatives or cultural background would discourage them from engaging in any interracial relationships. The panel then finished on a more light-hearted note, where two of the panelists shared their ideas of what their ideal one-night stand would be.

After the panel, six student discussion groups were formed, with each being given a distinct sex-related topic to discuss. Available subject matters included media, consent, sex education, virginity, healthy relationships and cultural ideas of sex.

In one discussion group, students shared the different cultural views of sex that were prevalent in their home country. Another discussion group analyzed the negative representation of sex in the media, where students agreed that television often romanticized non-consensual acts.

Students in one of the groups were asked to consider whether or not UBC provides enough opportunity for students to discuss sex-related topics in a comfortable environment. Students gave mixed responses, with one student believing that UBC has been reasonably successful with promoting many of its sex-related events, while another student expressed concerns about how first-year students who commute may not have as many opportunities to discuss sex-related topics as students living in dorms.

Overall, students were highly engaged in the conversations they partook in, with many sharing anecdotes of times they learned something related to sex or sexuality.

Nathan Herrington — a residence advisor who learned about the event through Facebook — believed that listening to the discussions that took place was a valuable experience for his job.

“I think this is just a really good space to have conversations about a lot of topics that aren’t uncommon in UBC, at least from the circles that I’m in,” said Herrington. “[As an RA], something that we’re trying to do on residence is highlight programs like this ... I’m hoping to take away what I learned and bring that back to Orchard.”