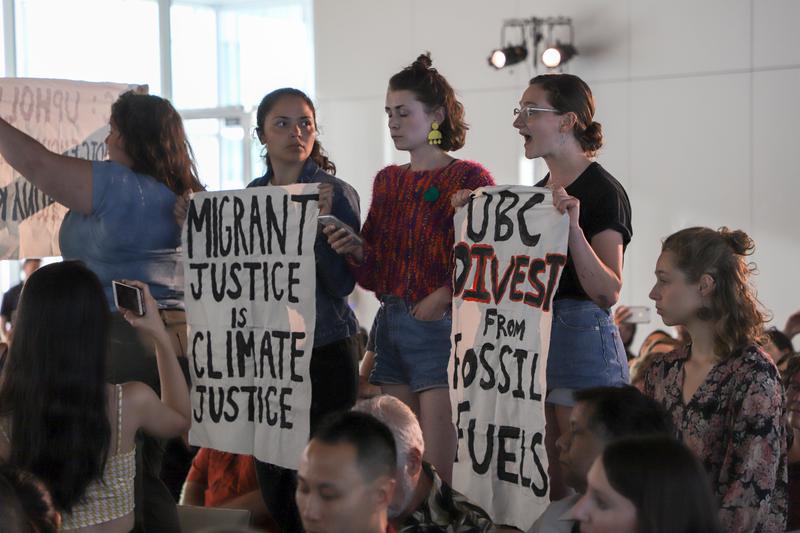 “UBC has worked really hard to maintain an image of climate leadership ... [yet] it continues to invest in an industry that is actively destroying our future.” Henry Anderson

Students interrupted President Santa Ono’s climate crisis talk on Monday to continue their push for the university to completely divest from fossil fuels.

The event, Agents of Change, featured a conversation between Ono and Janet Napolitano, the president of the University of California and former US secretary of Homeland Security. They discussed how universities can model climate advocacy and promoted their universities’ decision to join the University Climate Change Coalition (UC3).

UBC hosted UC3’s first conference this week, bringing together twenty universities to examine how they can lead sustainability research, cut emissions on campus and advocate for changes in policy.

An hour before the event, about thirty students gathered outside the Robert H. Lee Alumni Centre in a protest co-hosted by the political climate action club UBCC350 and other community groups. They chanted peacefully and carried signs that read “Commit Globally; Divest Locally” and “Migrant Justice is Climate Justice,” among others. 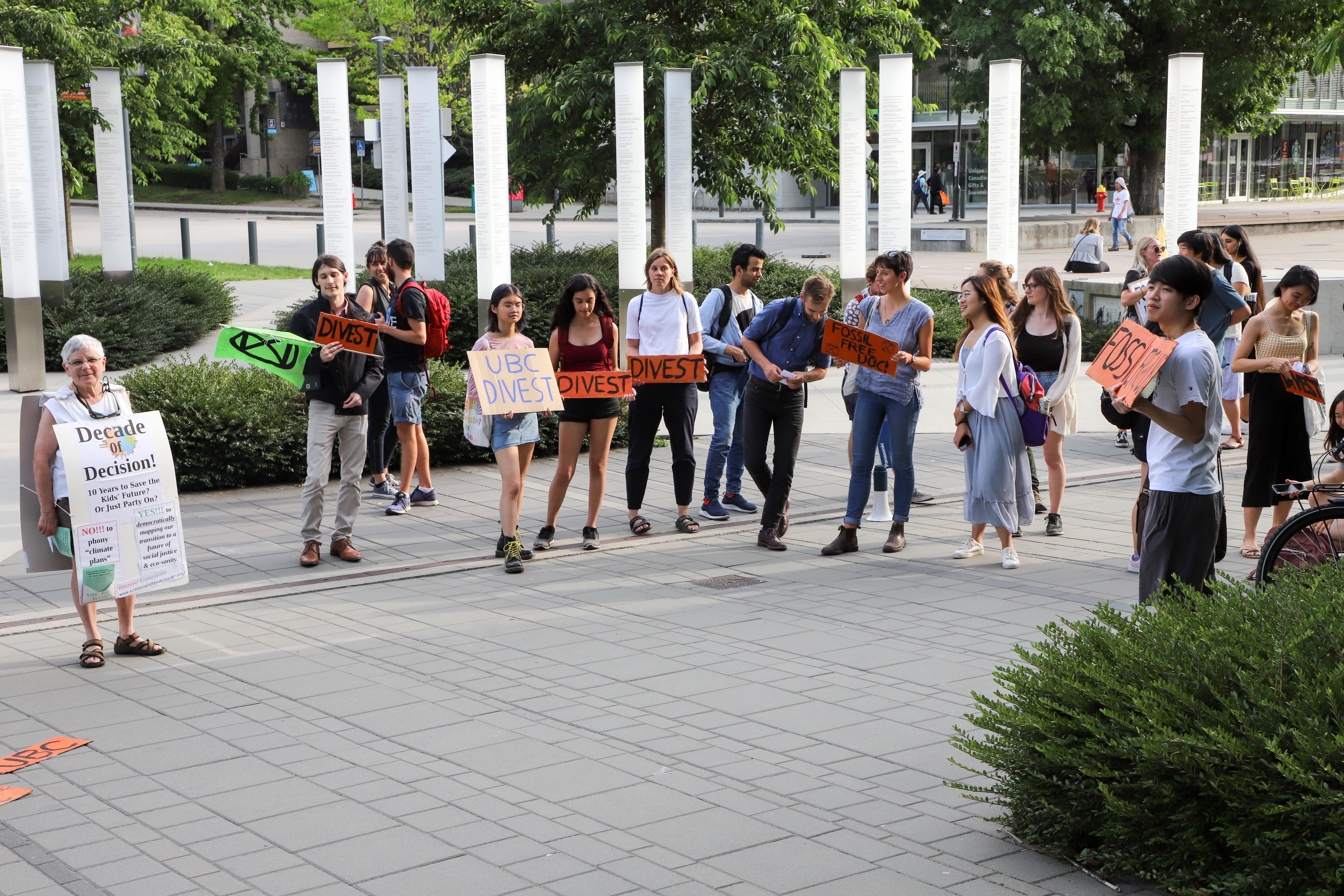 They chanted peacefully and carried signs that read “Commit Globally; Divest Locally” and “Migrant Justice is Climate Justice,” among others. Henry Anderson

UBCC350 coordinator Kate Hodgson said she could not take UBC’s commitment to the environment seriously until they divest.

“UBC has worked really hard to maintain an image of climate leadership, and that reputation is really important to them,“ she said. “[yet] it continues to invest in an industry that is actively destroying our future.”

Ono referenced the demonstration when he asked Napolitano about their “fiduciary responsibility” to divest. Both highlighted how their universities are increasing sustainable investments, but only gradually.

In April, the UBC Board of Governors (BoG) voted to double funding to the Sustainable Future Pool (SFP), a portfolio of exclusively low-carbon investments, from $25 to $50 million. But the pool makes up less than one per cent of UBC’s entire endowment, and the university hasn't made any moves to divest the remainder.

Ono believes that SFP returns have been promising enough to justify divesting further.

“The good news is that if you look at the performance of that sustainable investment fund here at UBC, it's actually out-performed the rest of the portfolio ... It's actually an experiment that affirms the possibility that we can continue to do that,” he said.

During the question and answer period, Hodgson and other coordinators stood up to state their demands.

“UBC has 80 million dollars invested in coal, oil and gas. UBC students have been calling on you to divest for the past five years, and you have continued to prioritize corporate interests over our own. ... UBC divest now,” said Hodgson.

Another UBCC350 coordinator denounced the universities’ involvement in funding the Thirty Metre Telescope (TMT) on Mauna Kea, a mountain sacred to Hawaiian Indigenous groups. UBC is one of twenty schools in The Association of Canadian Universities for Research in Astronomy (ACURA), a partner of the corporation that is building the telescope.

A third protester, Gabriela Doebeli, criticized Napolitano for deporting millions of undocumented immigrants during her tenure as US Secretary of Homeland Security. The audience applauded each speaker.

The demonstration was followed by a UBC researcher in the audience who asked what the “hold-up” is for divestment.

“I think the hold-up is not the principle of divestment. It is the path to divestment and timing, but we are working on it,” said Napolitano. Ono agreed and clarified that he cannot “unilaterally” make investment decisions.

In an interview with The Ubyssey after the talk, Ono said the protest was good for the university.

“As a former student activist myself, I was very proud of them... it's exactly what they should be doing and we should be listening,” he said.

He also declared that UBC’s Board of Governors will consider divestment going forward.

“Divestment is not something that I have the power to change on my own, but I'm committed to continuing to discuss it with the rest of the governors and I think we have a board chair (Michael Korenburg) that is also listening,” said Ono.

Carmen Kim, a Global Resource System student who attended the protest, is optimistic change will come.

“I feel like I have no choice but to be optimistic, even though a lot of the time it does feel like I can't do much as one individual,” she said. “I see people coming and actually being interested and that gives me hope.”

This article was updated to reflect that the third demonstrator to speak was Gabriela Doebeli, not Alex Okrainetz. It has also been corrected to describe the investments of the Sustainable Future Pool as "low-carbon," not "green."