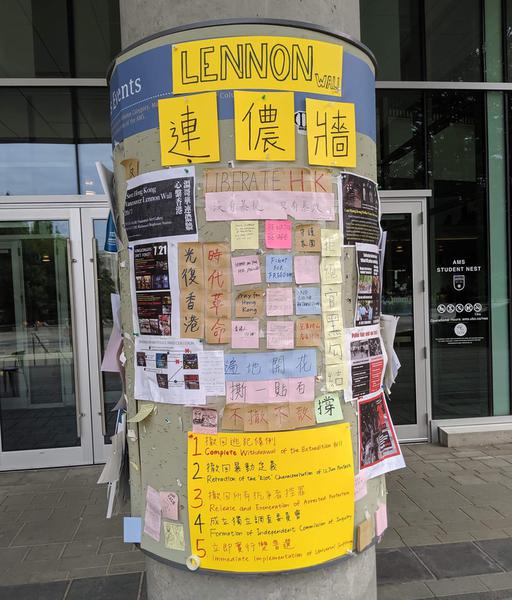 The walls are based on the original Lennon Wall in Prague, erected as a symbol for peace following the death of John Lennon in 1980, and have since spread across the globe. Emma Livingstone

As controversy surrounding the Hong Kong extradition bill makes its way to UBC, much of the debate is happening on Post-it notes.

Last week, UBC students protesting the extradition bill found that their displays were being repeatedly torn down and replaced with threats. Similar events at Simon Fraser University made headlines after its student society acted to prevent walls of messages from being vandalized.

Originally proposed in February 2019, the Fugitive Offenders Bill allows authorities from mainland China to file extradition requests to Hong Kong, Macau, and Taiwan. It was written after Hong Kong resident Chan Tong-kai admitted to killing his girlfriend in Taiwan, but could not be prosecuted because Taiwan police lacked the means to extradite him for trial.

But despite cases like these, many people in Hong Kong fear the bill would infringe on its judicial independence and allow China to silence government dissenters by extraditing them to be tried in China.

China has a long history of punishing activists. Liu Xiaobo, for example, received the Nobel Peace Prize in 2010 for his struggle for human rights in China, but was incarcerated at the time of the ceremony and died a few weeks after being released from prison on medical parole.

Christina, a PhD student from Hong Kong who helped put up the posters at UBC, requested anonymity to protect her from hostile reactions to her activism. She explained that the displays are a part of a larger movement for peace called Lennon Walls.

“It started in 2014 in Hong Kong where during the occupation movement, people put sticky notes in one of the walls in the government building just writing encouraging words, or their wishes for democracy on this wall, and it became this symbol for really peaceful protest,” said Christina.

The walls are based on the original Lennon Wall in Prague, erected as a symbol for peace following the death of John Lennon in 1980, and have since spread across the globe.

With no such wall at UBC, Christina and her friends began printing posters with information on the Hong Kong protests and posting them on pillars around the Nest. But it wasn’t long before she noticed they were disappearing. 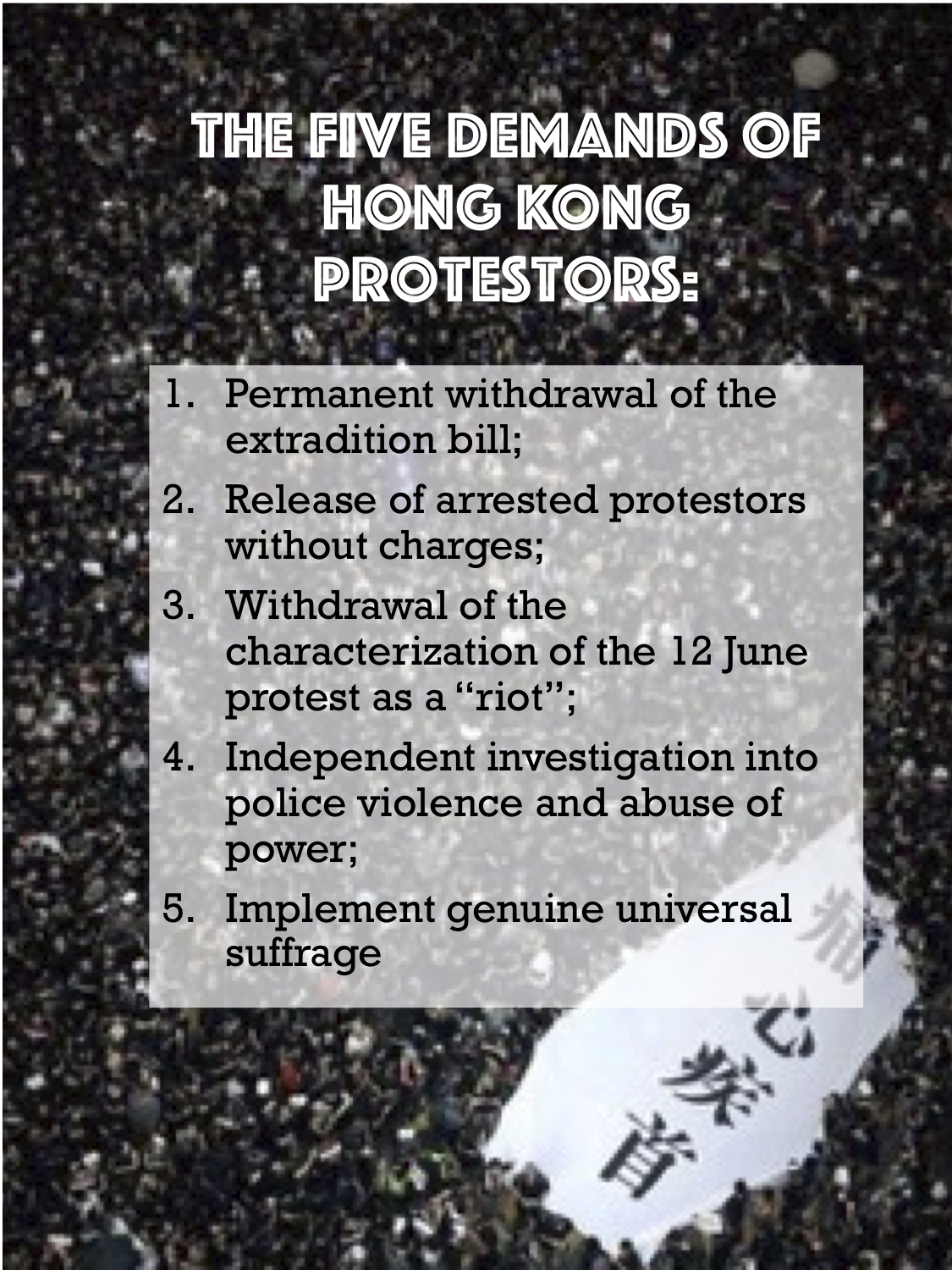 One of Christina and Alex Yeung's posters Courtesy Alex Yeung

“We’re really disappointed because they got taken down, within hours usually, especially if [they were] somewhere obvious, and it is quite apparent that only those posters were taken down,” she explained.

While Alex Yeung, a postdoctoral researcher in forestry, expected the posters to be torn down, he was discouraged to see this response at UBC.

As days passed, shorter messages of support for Hong Kong in both Chinese and English were posted on Lennon Walls around campus. But alongside notes that, when translated, read “For humanity, for kindness, for Hong Kong,” “True Universal Suffrage” and “China loves Hong Kong,” there also appeared messages that criticized — and in some cases threatened — Hong Kong protesters.

At UBC: Pro-Beijing nationalists are using Lennon Walls to spread hate speech. In Chinese: “Would you rather be Britain’s dog than China’s?”

W/ class starting next week, I hope schools are ready to address this and protect students. #HongKongProtests

Some translated messages include “Would you rather be Britain’s dog than China’s?” and “Spare the rod, spoil the child.” A third calls the protesters “Hong Kong poison,” a term used to slur separatists.

In an emailed statement to The Ubyssey, Campus Security acknowledged the messages and asked students to put aside their differences and talk to one another.

“As we welcome students to campus, we, and other universities across Canada and around the world, are mindful of tensions in Hong Kong,” reads the statement. “While we understand that there are strong feelings on both sides regarding Hong Kong and China, we encourage all members [of] the UBC community to maintain open lines of dialogue and engage in constructive debate.”

More than a two-sided issue

According to data that The Ubyssey received from a Freedom of Information request in early 2019, UBC has over 6,000 students from China enrolled between its two campuses. As a result, there are diverse views on the issue, but many agree that the subject is uncomfortable to talk about.

For example, when contacted by The Ubyssey, The Chinese Student Association declined to comment because it didn’t want to misrepresent the various backgrounds and perspectives of its members.

Nick, a fourth-year economics student who also asked for anonymity to prevent backlash from his family and community, was raised by parents from mainland China, but he grew up in Taiwan and identifies as Chinese American.

He said that because the Hong Kong extradition bill is so controversial among Chinese people, he tends to avoid the subject altogether.

“My family has already considered not talking about politics because to be honest it’s considered really polarizing, and people get very argumentative about it,” he said.

Nick explained that for some Chinese people — both back home and on campus — opposition to the Hong Kong protesters is about preserving China’s reputation, especially when it comes to respect for “law and order.”

“After … a very long time of humiliation from other global powers, they are sort of more sensitive to how other communities perceived them. They want to be perceived as strong and united, and become the new hegemony of the global community,” said Nick.

But Jinhua Yip, a fourth-year international relations student who grew up in Shanghai, said that culturally Chinese people tend to be quite apolitical.

“The prevailing opinion appears to be indifference, I’d say, because there’s no Facebook or Google or western media in China. It’s all locked, and most people receive their news through state media,” said Yip. “... Your family tells you to focus on your studies and not worry about politics.”

That said, he also said the Chinese state media contains a lot of misinformation and anti-western sentiment that turns its people against the protests.

“They say that the protesters are disrupting daily life in Hong Kong and [that] they’re in the wrong,” said Yip. “I’ve heard a lot of Chinese people talking, ‘It’s sponsored by the CIA. They’re funded by the Americans.’ And they actually believe this because it is what the state media reports … and it is kind of hard to argue against people.”

On September 4, Hong Kong Chief Executive Carrie Lam announced plans to withdraw the controversial extradition bill. But calls for an inquiry into police brutality and the release of residents jailed during the protests went unanswered.

“The mainstream thought of Hong Kong protesters is that Carrie Lam’s announcement of withdrawal of the extradition bill is too little, too late … we hope people won’t be misled to believe that the Hong Kong government has made a huge concession to the protesters and that the protesters should treat it as a victory,” wrote Christina and Yeung in a joint statement to The Ubyssey.

As protests persist, Nick worries their controversial nature is driving Chinese communities apart, but he does think they might spur the Chinese and Hong Kong governments into taking further action.

“This Hong Kong incident might sort of light a fire under the officials’ behinds [because] it is probably to their greatest benefit to actually solve the issue as soon as possible,” said Nick.

“This is something I believe that would define the next generation of Chinese people,” he added. “Is it justified to have a more authoritarian government for ... prosperity? Or should we pursue liberty?”

As for UBC, Christina believes that open dialogue between both sides is the only way to move forward.

“I think we have the right to express our opinions, and tell people our versions of our stories. And if they disagree with our versions, I think they should post other posters with their views, or even have a debate, just openly,” she said.

“Have a conversation instead of just taking it down.”

— With files from Henry Anderson.