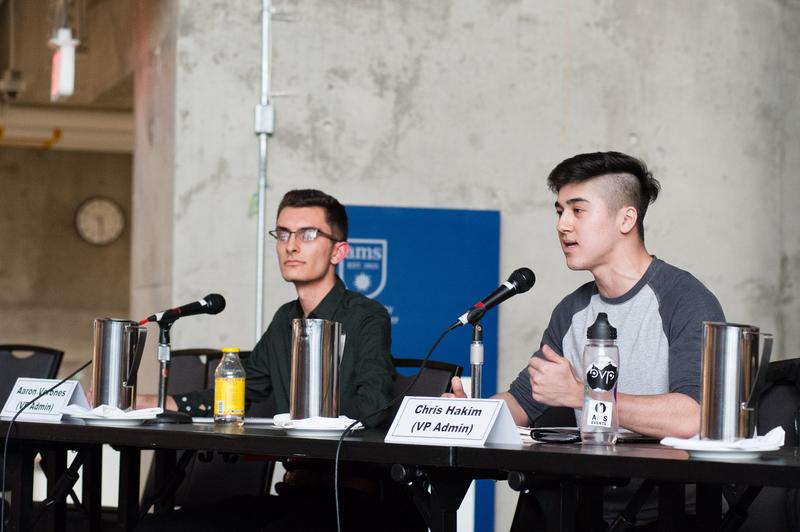 The VP Administration race saw a much more controversial Great Debate than that on Tuesday. Some of the controversy came from candidate Aaron Verones’s refusal to reject the Inter-Fraternity Council’s (IFC) endorsement, which most candidates have rejected following a letter from VP Academic candidate Max Holmes.

The debate started off with Verones and his opponent Chris Hakim mostly agreeing. After questions about disputes within clubs and balancing bookings between student groups and businesses, the issue of controversial clubs seeking approval was dealt with. The candidates offered similar responses, with both mentioning that they wanted to have clubs that are respectful and that they provide value to the student population.

“When we’re working to accept a new club, we always have to make sure that the club is serving a new need within the community,” said Verones.

The debate then moved on to questions for the individual candidates.

When Hakim was asked about where the money for the new Art Gallery position that he proposed would come from, he simply replied that “it would come from our budget,” and then went on to talk about how important this position would be.

After briefly talking about efficiency, Verones was then asked about how his refusal to reject the endorsement would impact how comfortable sexual assault survivors would be with disclosures under his administration.

Verones responded that he accepted the endorsement before the letter came out and that instead of spending time considering whether or not to reconsider the endorsement, he spent the day educating himself on the resources available to survivors of sexual assault.

“I think that it is irrelevant that I’ve chosen to accept the IFC endorsement when we could be doing so much better to help our students,” said Verones. He also said he was the only candidate who met with the IFC president to “hear him out.”

Hakim said that he would not have accepted the endorsement if he were to receive it.

The debate then moved on to the audience question period, where the issue of the recent Expulsion Policy came up.

According to Hakim, the Operations Committee — which he sits on — is currently reviewing the policy, but he also said he knew that it was an issue when it went to AMS Council. Verones agreed that it has issues, emphasizing that the policy should be more student-centric and should have received more student consultation.

Verones was then questioned again about his failure to reject the IFC endorsement by an audience member.

“It’s more of a symbolic thing that you stand with survivors, and you said it doesn’t matter if you rejected it or not, so why don’t you just reject it then?” the audience member asked.

“And so I have to reiterate, I accepted the endorsement before Max’s letter came out, and I don’t intend to take action based on something I wasn’t privy to.”

The last question of the debate came from former VP External Kathleen Simpson, who asked about how they would respond to students who come to them with complaints regarding sexual assault within clubs. Neither addressed the question itself, but chose to discuss sexual assault in general instead.

Verones talked about disclosure training and how he would have experts in charge to ensure high quality resources for survivors. Hakim said he would make sure that AMS executives and staff members get SASC training, and that the approach to survivors should be trauma-focused.

“I want to make sure that different avenues of the AMS [are] continuously getting SASC training,” said Hakim.

“I can’t say I’m an expert on this, but I want to make sure [that] if someone is coming to us regarding a case of sexual assault, it shouldn’t necessarily be victim-focused, it should be trauma-focused…. You should be going into it with a mindset of making sure we’re taking care of them.”

This article has been updated to clarify that SASC does not fall under the direct supervision of AMS VP Administration. While the service is included in the operations of the Nest — which the VP Administration oversees — it is directly managed by SASC manager and Managing Director instead.