Over 60 UBC researchers sign the World Scientists’ Warning to Humanity 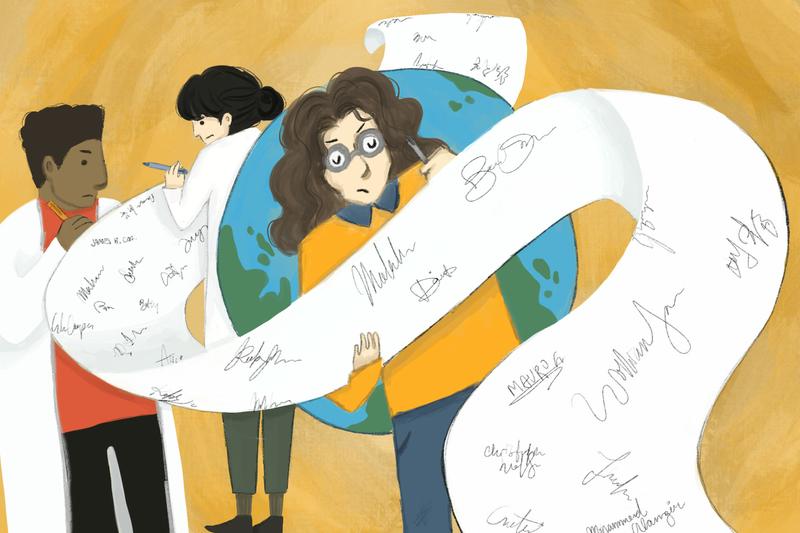 “We just have to care about this,” said UBC climate change researcher Greg Henry. Aiken Lao

A letter has been sent out to all of humanity, warning us of an impending calamity.

The letter, which has been signed by over 15,000 scientists, was published in November 2017. Aptly named the “World Scientists’ Warning to Humanity,” the letter voices scientists’ growing concern with climate change and calls for humanity’s participation in curtailing environmental destruction. Of the signatures, there are at least 527 from Canada, and at least 60 from researchers or affiliates of UBC.

This is not the first warning that has been sent to humanity. A similar letter, the scientists’ first notice to humanity, was sent 26 years ago in 1992, also calling for humanity to take action against climate change by reducing environmental destruction and creating changes to avoid an environmental crisis for humanity.

The 2017 letter calls for similar action while examining climate change data over time, particularly during the decades that have elapsed between the first letter and the second.

Sarah Amundrud, signatory of the letter and a UBC PhD candidate who studies the effects of climate change on food webs and Costa Rican ecosystems, noted that the publication of the letter was very timely. “Especially [with] the year that we had, we could really observe climate change firsthand like in BC with all the wildfires [and] all the tropical storms we’ve had.”

The 2017 letter evaluates various global trends related to climate change, many of which have worsened over the past 26 years.

By contrast, the depletion of the ozone layer — the atmospheric layer that inhibits the earth from heating up too quickly — has slowed and is expected to greatly recover by the middle of the century. The scientists also argued that climate change has unleashed a mass extinction event that will eliminate many life forms or set them on the path to extinction by the end of the century.

Canada is no exception to the impacts of a changing climate.

Letter signatory Dr. Greg Henry, a UBC researcher who studies the effects of climate change on the Arctic and northern populations, described the remarkable changes he has observed in the Canadian Arctic over time. When he started his PhD in the 1980s, it had already been predicted that the climate was likely going to change, but the research was in a fledgling stage at that time.

“By the time I finished my PhD … it had already started to become widely known in scientific circles that the continued use of fossil fuels was going to warm up the planet,” Henry said. “That change, just over the 1980s, made me look at my research in a slightly different way, that this was going to be an impending change. And even simple climate models that were starting to put out results back then were showing that the Arctic was going to warm the fastest and most intensely than anywhere on the planet.”

Henry described a variety of changes in the Arctic he had observed due to climate change and how they have impacted ecosystems and people. For example, the thawing of the Arctic permafrost — permanently frozen ground — can lead to thermokarsting, where tundras experience increased ponding and consequently higher levels of freshwater.

These changes also include increased shrubbery north of the treeline, changing animal populations and increased winter snowfall and summer rainfall in certain areas of the Arctic.

Changes that occur, Henry noted, are not uniform and different parts of the biome respond in different ways to the changing climate. He also described how the Inuit and other northern populations, who have lived in the Arctic for generations, are finding it increasingly difficult to predict the way the system will react to changes in climate.

“I never thought that I would be watching whole ecosystems start to change, except in experiments, but they are,” Henry said. “The whole place is warming up and reacting very quickly and in ways that shouldn’t be at the pace that you see the changes.”

Canada is home to a wealth of natural resources. It has the third largest renewable freshwater supply worldwide and nine per cent of the world’s forest cover. The changing climate has resulted in various consequences across the country, including melting ice caps in the Arctic, increased ocean acidity and lengthened growing seasons in many regions.

In BC specifically, there are a number of ongoing and projected changes influenced by the changing climate. Milder winters and warmer summers contribute to the infestation of mountain pine beetles which devastates BC’s forests. The largest sea level rises in coastal BC that are influenced by climate change are expected to occur around the Fraser Lowland, southern Vancouver Island and BC’s north coast.

Henry also explained that the loss of water reservoirs due to melting glaciers and icecaps in the mountains will affect BC and Alberta in particular.

Even though climate change has far-reaching consequences, its effects can be extremely difficult to track.

“The effects of climate change aren’t always obvious; they’re often very difficult to predict, and the reason is because in the ecosystems, everything is connected,” Amundrud said. “As climate change affects one aspect of an ecosystem, this can cascade to other ecosystem aspects that you would have never guessed beforehand.”

Describing her own research with food webs and the insect communities that live in bromeliads, Amundrud explained how changes in an ecosystem can affect other aspects of the same ecosystem. She found that predators in the ecosystem are actually disproportionately affected by decreased precipitation, a predicted outcome of climate change in the tropics.

Similarly, the predicted impacts of climate change are expected to affect multiple aspects of human society such as environmental systems, the economy and human health. The impact of increased levels of greenhouse gases — which are a key factor in climate change and are the byproduct of many human activities — are expected to lead to increased average annual temperatures, higher risks of flooding and overall increased precipitation levels across most of the country.

Canadians may also experience an increased risk of respiratory and cardiovascular problems due to higher temperatures and increased air pollution. Agriculture, forestry and tourism are among some of the industries that may be affected by changing weather patterns, while the exacerbation of human health impacts is expected to put pressure on the healthcare system.

“We only have one planet. If we want to keep doing what we’re doing, we really need to change our behaviour,” Henry said. “That’s the hard part. We can talk about what [climate change] does to the Arctic and what it does to reservoirs and we know all of this, but what it really comes down to is how we can change our behaviour.”

The letter calls for changes such as preserving wildlife reserves, reducing food waste through better infrastructure and rewilding areas with native species. In 2015, Canada signed the Paris Agreement, an agreement within the United Nations Framework Convention on Climate Change to curb greenhouse gas emissions to prevent the planet from warming up more than two degrees Celsius.

“We just have to care about this,” Henry said. “We have to stop polluting the atmosphere and treat it with a lot more respect … to find some way to care more ... for the planet and all the fields of earth, what’s around us and how important we are in the system and how the systems support us.”