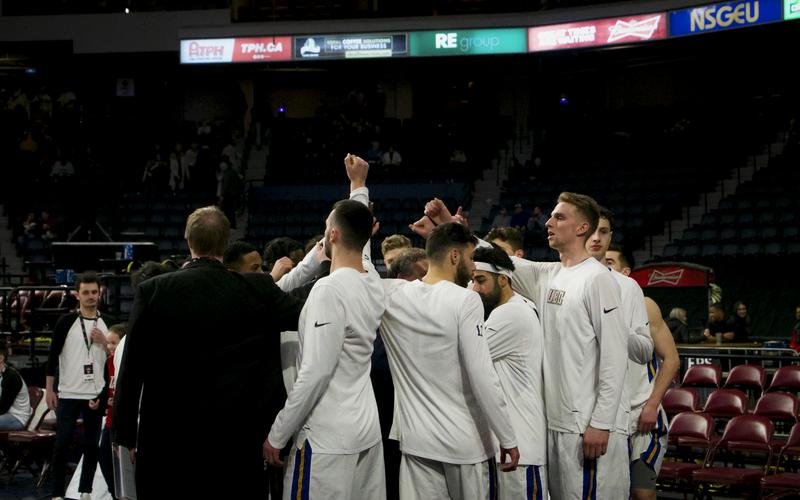 After a rough start to the tournament yesterday, UBC seemed to find some momentum in the second half of tonight's game. Mitchell Ballachay

After dropping a heartbreaking opener to the Dalhousie Tigers, the UBC Thunderbirds men’s basketball team returned to action Saturday evening in Halifax to continue play at the U Sports Final 8 national tournament. Overcoming a slow start, they rallied down the stretch, downing the Alberta Golden Bears 72-65 to earn a spot in the consolation final.

This game was to be the pair’s sixth head-to-head matchup in just five weeks. The two teams played a double-header to end the regular season and the T-Birds would get the better of the Bears in a three-game Canada West semifinal matchup to book their ticket to nationals.

For the second night in a row, the Thunderbirds couldn’t seem to get things done on offense in the early stages of the game. Four of the five starters were held scoreless in the opening frame, collectively shooting 0-6. The 14 points that the ’Birds did put up came from the hands of sophomores Mason Bourcier and Grant Audu. The pair showed excellent poise and control considering their inexperience — staying aggressive and finding their spots, both inside and on the perimeter.

Alberta, however, started the second quarter at a tremendous pace, taking advantage of a struggling UBC team. They would score 23 in the frame and continue to pad their lead. Bears guard Ivan Ikomey, the eventual player of the game for his team, posted a monstrous quarter — scoring 14 points on 5-6 shooting, a perfect 4-4 from beyond the arc.

Though the Thunderbirds found themselves down 38-31 by the end of the half, their top scorers started to get on the board after what had been an anemic first 10 minutes. Manroop Clair and Jadon Cohee each scored their first points of the game, both looking to get engaged offensively to try and bury their forgettable outings the night prior.

Heading into the intermission down seven, the team was not in an ideal spot — but Bourcier’s continued efforts on both ends of the floor helped the team stay within striking distance. The young guard would post eight points, two steals, two rebounds and two assists for a strong half, surrounded by an otherwise quiet team. Thanks to his efforts, for the first time at the tournament, the Thunderbirds were starting to show signs of life. 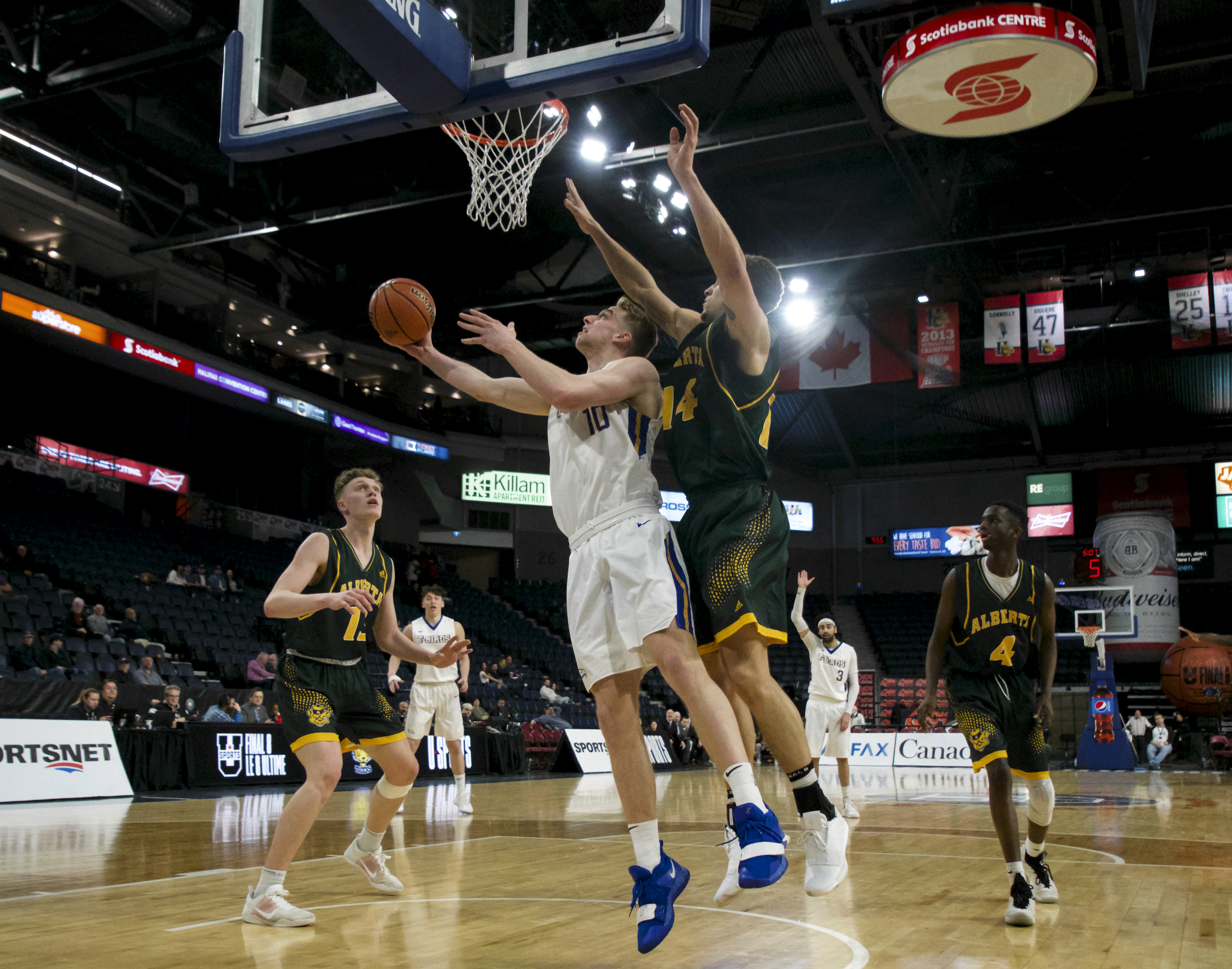 Following Bourcier’s lead, the ’Birds answered Alberta’s solid second quarter by taking control of the game in the third. The Thunderbirds came out strong to start the second half, making defensive stops and pushing the pace of play with their transition offense.

“We just kept it positive and we thought we just needed to be the aggressors,” UBC head coach Kevin Hanson said of his message to the team at halftime, following the game. “Some guys came in and played physical, we got some rebounds. … We were able to push in transition, get some easy scores and obviously we got more confident as that went on.”

In the dying seconds of the period, Clair hit a spinning, fade-away jumper to extend the lead to 10. The pretty play punctuated a dominant quarter that saw UBC outscore Alberta 26-9 and capture a 57-47 lead heading into the final quarter of play.

Though the Bears pushed to keep the game exciting into the final minutes, UBC came up with some big buckets at key moments, including a pair of clutch three-pointers by long-range specialist Clair. The team would hold on to a 72-65 victory, ending the Bears’ weekend at the Final 8.

Through Clair’s strong second half showing, he posted 19 points, bringing his game total to 23. His efforts would earn him player of the game honours for the UBC side.

“Yeah, we’re not really sure what goes on in that guy’s mind. … We’re not sure what makes him tick. Sometimes he’s got it going and when he does, it can be impressive,” Hanson said of Clair.

“Obviously, we needed someone to step up in scoring and he did that tonight.”

On top of Clair’s stellar performance, Hanson commended the play and leadership of young Bourcier, and attributed much of the team’s comeback victory to his outing.

“Especially in the first half, even when we got down, I thought Mason [Bourcier] played outstanding for us. … He didn’t get player of the game today but he was our most valuable player throughout the game,” Hanson noted.

“… It’s a great sign of leadership for a second-year kid to do that, so it’s very promising.”

During the opening minutes of the game, as their starters ran into offensive trouble, UBC saw an opportunity to bring some fresh faces to the court. A trio of rookies — Brian Wallack, Cameron Morris and Lincoln Rosebush — all made their Final 8 debuts in the first half of the game. They join fellow first-year Jonah Morrison, who has seen play-time in both matchups so far this weekend, in getting their first taste of play on a national stage.

“Coach [Vern] Knopp … does our substituting so, he made a decision that … his words — ‘We want to win a basketball game tonight, but we want to make sure we use it as an opportunity to get guys some playing time and some minutes.’ I think he did a good job of that,” Hanson noted.

Now, the T-Birds have to turn their attention to Sunday’s matchup — their final of the season. They are slated to play Saint Mary’s University in the consolation final.