Thunderbirds find their spark at Thunderstruck 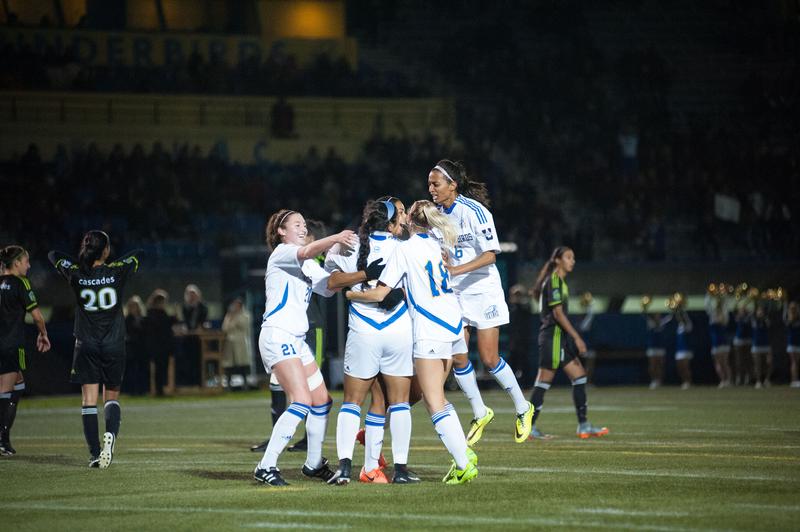 It was a triumphant Thunderstruck for women's soccer. Patrick Gillin

Underneath the spotlights at Thunderbird Stadium, the women’s soccer team put on a show for the Thunderstruck fans on Friday night and solidified their dominating presence going into playoffs — defeating the University of the Fraser Valley (UFV) Cascades 3-0.

The T-Birds made sure that play was in their favor from the very beginning on Friday evening. Within just 40 seconds of kick-off, forward Jasmin Dhanda chipped the ball past UFV keeper Emily Harold and put the ball in the back of the net off a pass from her attacking partner Aman Shergill. The goal not only gave the 'Birds the early lead, but pushed Dhanda into top spot as all-time leading scorer in Canada West history. 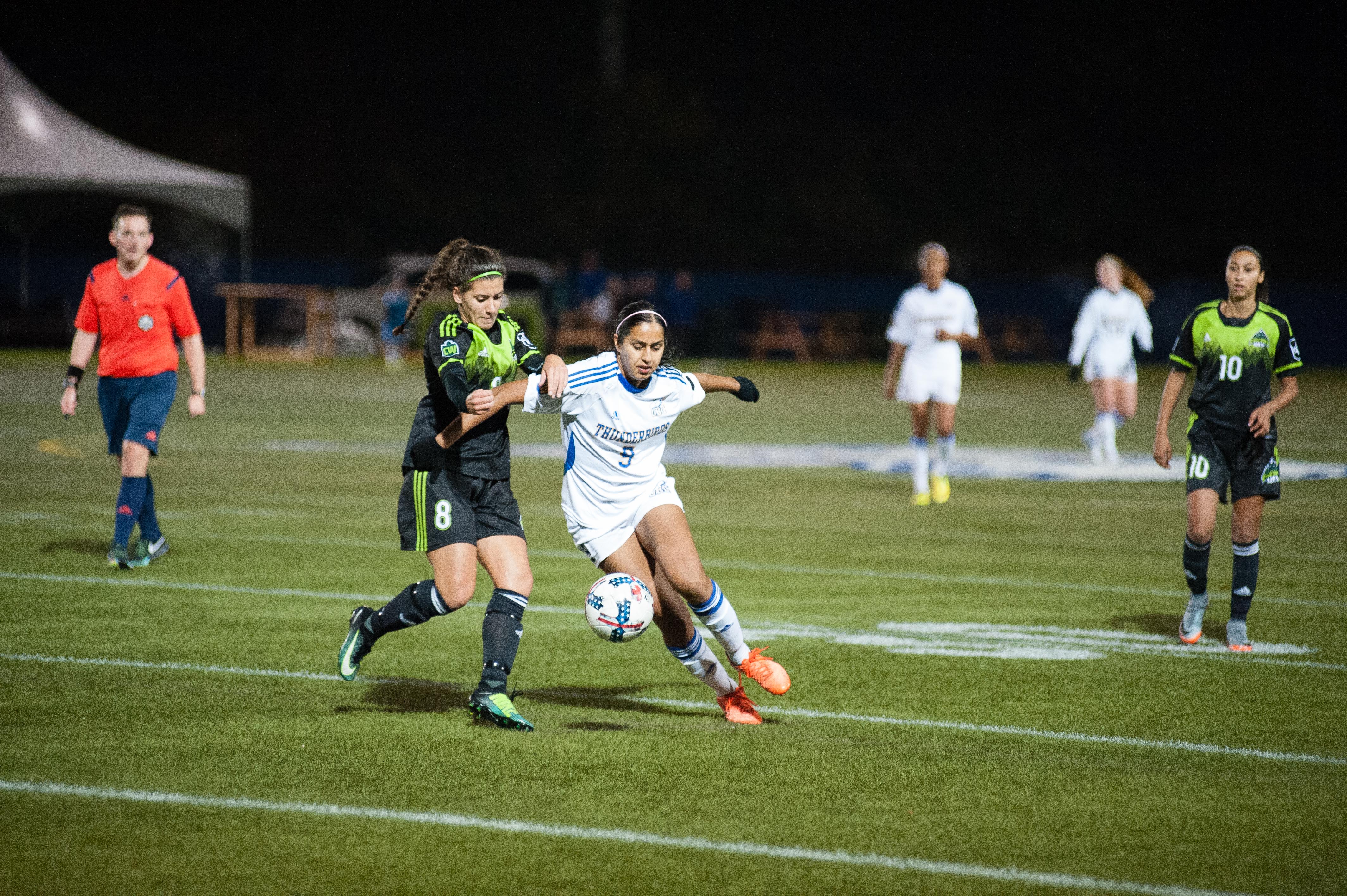 Jasmin Dhanda made history in front of the Thunderstruck fans on Friday. Patrick Gillin

In the following 30 minutes, the Cascades showed strength in the face of adversity, defending hard against UBC’s attacks and notching two scoring attempts for themselves. In response, the T-Birds turned up the heat too. Shergill would be the first to take advantage of the ’Birds newfound fire, as she put the ball past Harold in the 39th minute. Unfortunately, her shot hit the post, allowing UFV to escape another UBC goal.

Shergill got the chance to make up for it though early in the second, when she earned a penalty kick in the 55th. The fifth-year veteran shot the ball into the top right corner of the net, extending UBC's lead to 2-0. Fifteen minutes later, she would widen the gap to 3-0 with a shot from just outside the six-yard box — assist credits went to forward Danielle Steer.

“For the personal [goals], honestly, it's just doing what I can for the team and for this team to win in anyway,” Shergill said post-game. 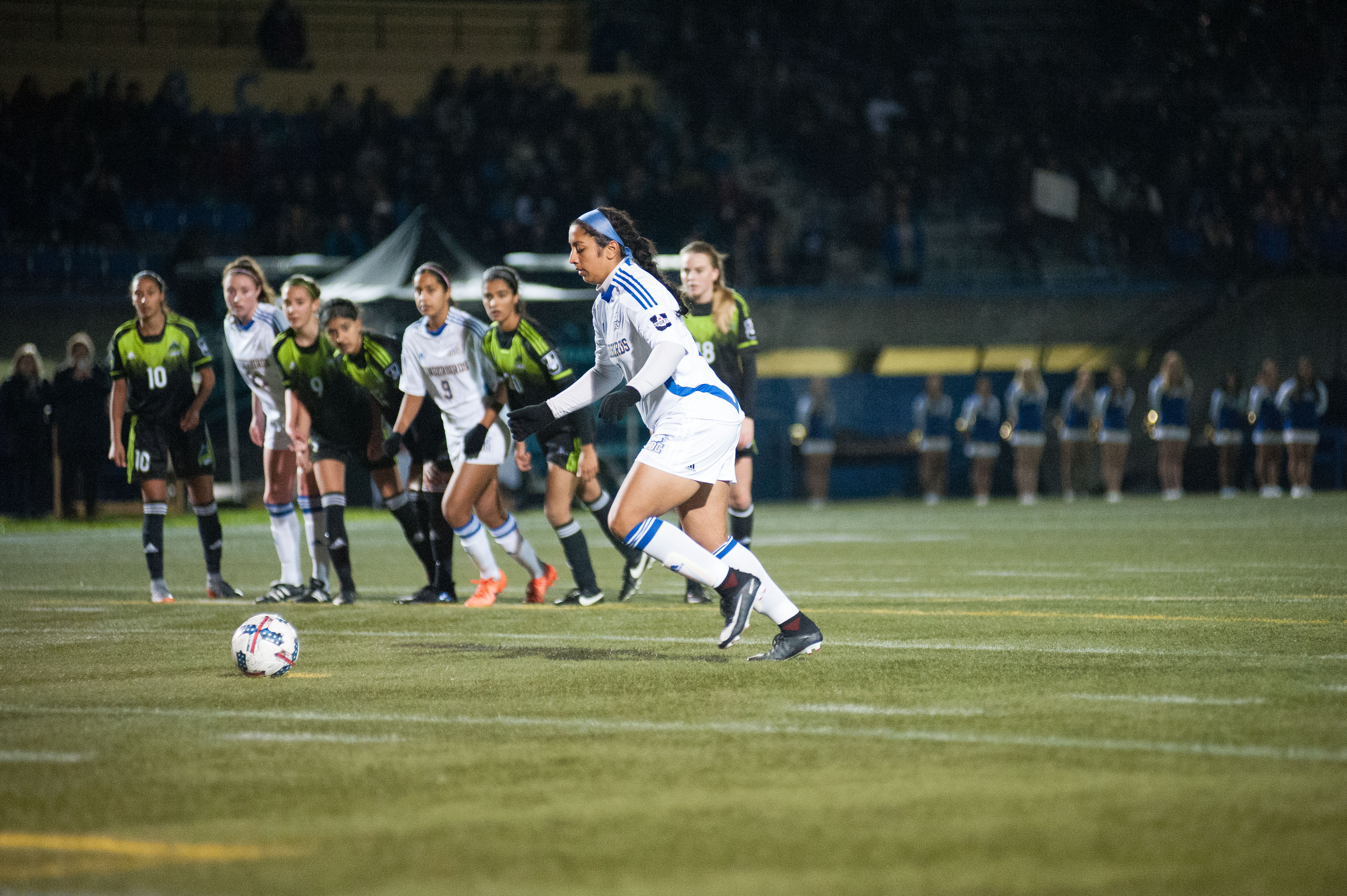 The Cascades wouldn’t be able to close the gap and the Thunderbirds ended the match with a convincing 3-0 lead. Together, the T-Birds made 19 shots in the game, eight of which were on goal.

“It was a great game. Everyone was on point, we all played our game, we all fulfilled our role. Everyone was behind the ball when we needed to,” Shergill said of the team's performance. “If we lost [the ball], we were all over it and we won it back and we capitalized on everything.”

Saturday evening’s match was no different, as the ’Birds defeated the Trinity Western Spartans 2-0.

Looking forward to the playoffs, Head Coach Jesse Symons said, “We just have to keep doing what we are doing and hopefully get back to the national championship.”

The team’s first playoff game will take place next Friday, October 27, at 9 a.m. in Saskatoon against the Manitoba Bisons.

This article has been updated to reflect the team's Canada West play-in date and time.