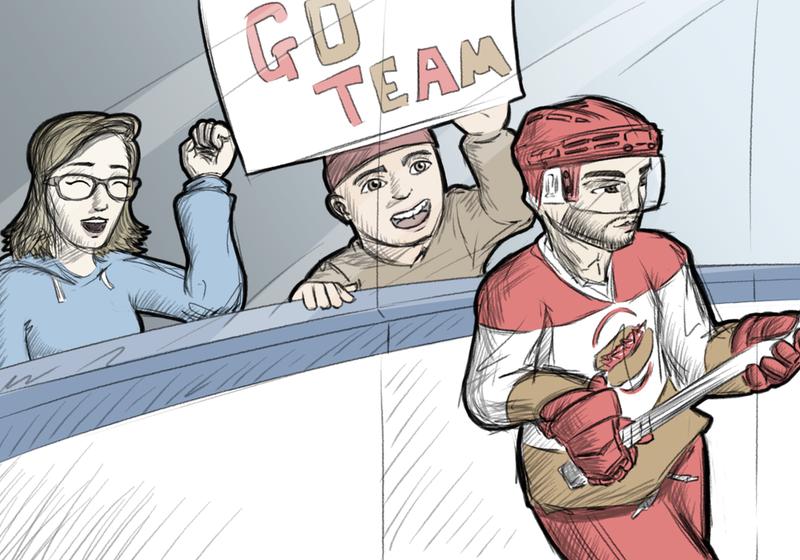 Some kids enter university having spent their high school days on top of the world. You know the type – they were essentially the basis for Jack and Diane, or would have been had that song not preceded all of our births by at least 10 years. Often, these students are associated with images of Friday night lights, bonfires and red solo cups as an unofficial reward for their athletic achievements. Perhaps country music is playing in the background, I dunno.

I don’t know many of these students, but I am pals with some of the most average intramural hockey players you’ve ever seen, so that’s close enough.

What’s more, their team of name-taking marauders had recently invited some friends and me to come watch a rivalry game of theirs and you can just about imagine our response!

But then we realized this was a chance to watch the future fully-functioning adults of the Northwest play quidditch on ice. More importantly, this was a chance to terrorize them from the stands, something which every friend of an amateur athlete dreams of. Like the saying goes, “If you can’t do, teach, and if you can’t teach, make everyone regret inviting you to their amateur hockey game.”

For the purpose of confidentiality (read: if I reveal the identity of these people, they’ll knock me out with a shovel and bury me underneath a meth lab in Langley), I’ll refer to the two ice quidditch teams as the Fighting Lobster Rolls — go team! — and Crimson Flow — exaggerated boos.

I was informed of the rivalry’s history by the seeker for the Rolls who we’ll call “Kam.” He explained that the teams’ heated competition goes back multiple semesters and that, with all their history, I should “expect to see fights break out.”

The game got off to an exciting start. It turns out these tom foolerers could actually skate pretty well. This was not in line with my expectations, which was for them to be about as graceful as a herd of anthropomorphic dumplings. I suppose this says more about me than my quidditch-playing friends, namely that if you tell me you participate in a thing, I will assume that you’re horrible and have no talent. Just kidding. Kind of.

Soon after the puck dropped, the fellow Fighting Lobster Rolls supporters and myself noticed that the Crimson Flow had one main advantage — their dugout (is that what it’s called? Whatever, shut up) appeared to have as many subs as the 19 Kids and Counting family has children. So, uh, 19. Our boys, on the other hand, had two, and those dweebs moseyed on in five minutes after the game started.

In the end, this proved to be a crucial factor as the Rolls could afford little rest whereas the Flow constantly churned out new, well-rested players like they were coming fresh off the press at an Andy Warhol factory.

The Flow took the lead quickly and didn’t hesitate to extend it to a couple goals. But then, just as the Lobster Rolls’ faithful began to lose all hope, Kam came through with a clutch slapshot goal as if to say, “Don’t get too cocky, Crimson Flow. We’re coming for you.” The crowd went wild! Had we just witnessed the beginning of a comeback? Would we tell our grandchildren about this moment?

Though our boys did put up the fight from which their namesake is derived, exhaustion snatched victory away. By the end of the game, the Rolls were plodding along, wondering where the eff their subs had gone. The Crimson Flow, it appears, will be a worthy rival for semesters to come.

Also, if someone knows what the dugout is called in hockey, please leave an answer in the comments.