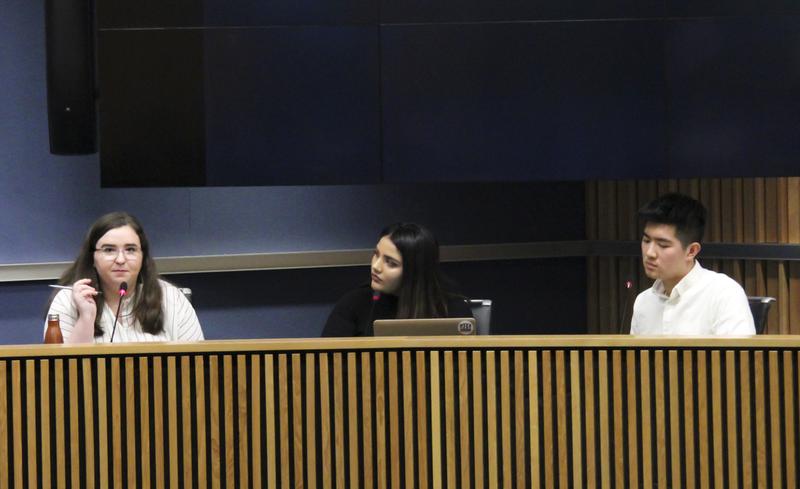 Mental health, student engagement and advocacy were among the hot topics of the night. Elizabeth Wang

On Tuesday, the VP Academic and University Affairs (VPAUA) candidates gathered for the first of two debates for the 2019 AMS elections.

Mental health, student engagement and advocacy were among the hot topics of the night for hopefuls Julia Burnham, Vandita Kumar and Nick Pang.

She added she would push for fossil fuel divestment at UBC, a review of the Sustainable Future Fund and a renegotiation of existing contracts that oversee student’s mental health coverage.

Kumar, current president of UBC Residence Hall Association, said she would connect with student groups on campus to create dialogue “that extends beyond the Academic Experience Survey [AES].”

Pang, the current co-chair of the Senate student caucus, laid out the “ABCs” of his platform: affordable and accessible academics, better mental health and sexual violence support, and collaborative advocacy.

The first question asked candidates’ opinion on the current advocacy surrounding UBC’s Excellence Fund allocation and their top three priorities regarding that advocacy.

Burnham said she was “excited” by the proposals put forth by the AMS for the Excellence Fund. She said she would prioritize creating space for UBC’s “in-house” services for counselling and health, such as the Integrated Health Centre under construction in Orchard Commons.

“We have such a lack of actual physical space to be performing these services that we need,” she said.

Later in the open debate, Burnham also noted the importance of expanding open educational resources (OERs) through this funding allocation.

“It is something that’s really huge in Excellence Fund asks,” she said. “... The AMS has already secured a million dollars of development funds for the next four years.”

While the AMS has potentially secured $750,000 annually for two years for OERs development through the Excellence Fund, the budget consultation process is ongoing and will be voted on at the April Board of Governors meeting.

Kumar wanted increased support for student clubs advocating for issues like mental health, in conjunction with the VP Administration. She did not say how she would advocate for funding from the Excellence Fund.

Pang echoed Burnham’s support for the Integrated Health Centre and increased mental health services. He also wants to invest in peer-led mental health support and modern, accessible classrooms through the use of lecture recording.

The second question asked candidates when and how the AMS should publicly challenge UBC.

“I think that the AMS should always be publicly challenging the university,” said Burnham. “We’re vocal in the submissions that we send to the Board of Governors and the way that we speak about [issues] to The Ubyssey and the media.”

She also brought up fall reading break as an example of the university’s failure to listen to students.

“This office needs to be working with students in order to … validate the perspective of the AMS at the grown-ups' table,” Burnham said.

Kumar said the “best interest of our constituents” should guide the AMS’s response but did not explicitly say how the AMS could challenge the university.

She cited the society’s 2018 AES report and response rate as evidence of students’ disillusionment with the AMS, before emphasizing the importance of student engagement.

“I believe that the engagement with the survey was a little over 3,000, which proportionally I believe is around the five per cent mark,” she said. This is true, as 3,023 people responded to the survey out of 58,274 undergraduate and graduate students.

“... We need to really actively, proactively try to create that kind of dialogue that goes beyond hard line data illustrated by trends.”

“We should always be challenging the university when their interests don’t match ours,” he said, before adding that the AES found “only 22 per cent of students think UBC cares about their voice.”

His statement is somewhat misleading, as the statistic was the result of “students agreeing that the university cares about what they think about the cost of education.”

Finally, candidates were asked to create a question for the AES — but no candidate actually did so.

Burnham said she would like to include constituency affiliation, but acknowledged that there isn’t sufficient response across all constituencies.

Kumar said the AES should include questions based on the previous year’s responses, but felt it was “too early and a little too presumptuous” to say what that question should be.

Pang suggested having more questions geared toward professional and graduate students to better support them, criticizing the AMS’s lack of advocacy for those students.

In the final open debate portion, Pang asked Kumar why she isn’t running for Senate. Kumar said her “lack of involvement with the AMS in the past” meant that the role of senator should go to a “more well prepared” candidate and that the VPAUA position was most suited to her past experience.

Burnham questioned why Kumar chose to run for VPAUA if she felt “unprepared to represent students on the Senate.”

Kumar replied that she was unfamiliar with the structure of the Senate but pointed to her experience working with university administration as the UBC Residence Hall Association President as preparation for the VPAUA position.

In their closing statements, the three candidates repeated their platforms and made the case for why they deserved the job.

Burnham highlighted her experience with the AMS as its Campaigns and Outreach Coordinator, her three years with The Ubyssey — she previously covered the VPAUA race for this paper — and her passion for making the AMS more transparent.

Kumar said she would bring a “fresh perspective” to the AMS.

“I am very acutely aware of the fact that I am typically what could be seen as an AMS outsider,” she said. Kumar said she would push for long-term “cultural and systemic” change within the society.

Pang stressed the importance of pursuing mental health advocacy, “not just with more stress balls but to really increase peer support.” He said his experience as a telephone crisis line counsellor convinced him that peer support could affect change on campus. Pang ended his remarks with a reminder about his platform’s goal of affordability and accessibility.

“I truly believe that I am the candidate with the most experience and the most willing to change things at UBC,” he said.

The VPAUA candidates will face off once more for the Great Debate on Friday, March 1 in the Nest’s atrium.