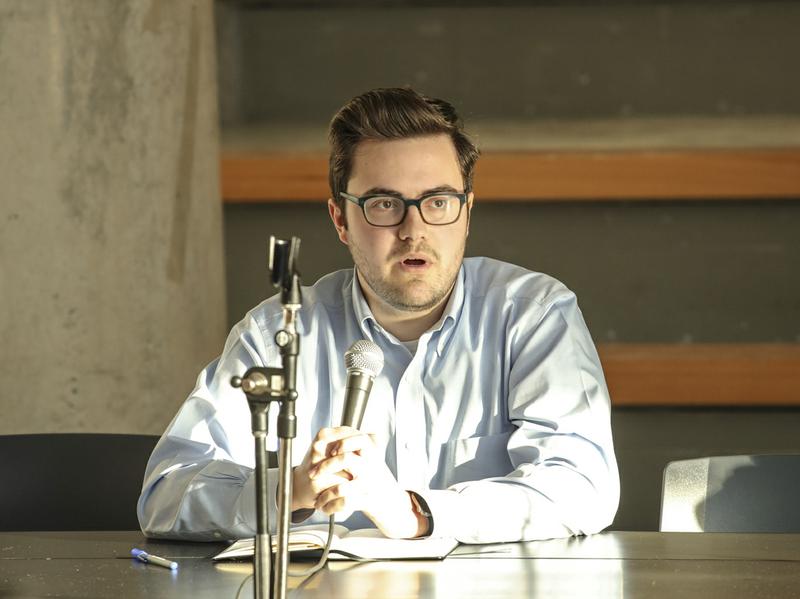 Max Holmes, pictured here at Friday's Great Debate, is facing accusations that he attempted to stamp out criticism from the AMS's oversight board. Salomon Micko Benrimoh

Some AMS councillors say they were "shamed," "ambushed" and "pressured" by an AMS executive after voting to censure the society's executives last fall.

VP Academic and University Affairs (VPAUA) Max Holmes had private meetings with councillors after Law councillor Dylan Braam moved to censure, or reprimand, executives for failing to promote the society’s Annual General Assembly, as the VPAUA is required to do.

Holmes said in a statement to The Ubyssey on Friday that the meetings were to “discuss how [Councillors] could have a more productive relationship between Councillors and the Executive.”

But during the Board of Governors Great Debate, Braam said Holmes — also a candidate — “called councillors into his office to tell them to stop being critical of the AMS exec[utives].” 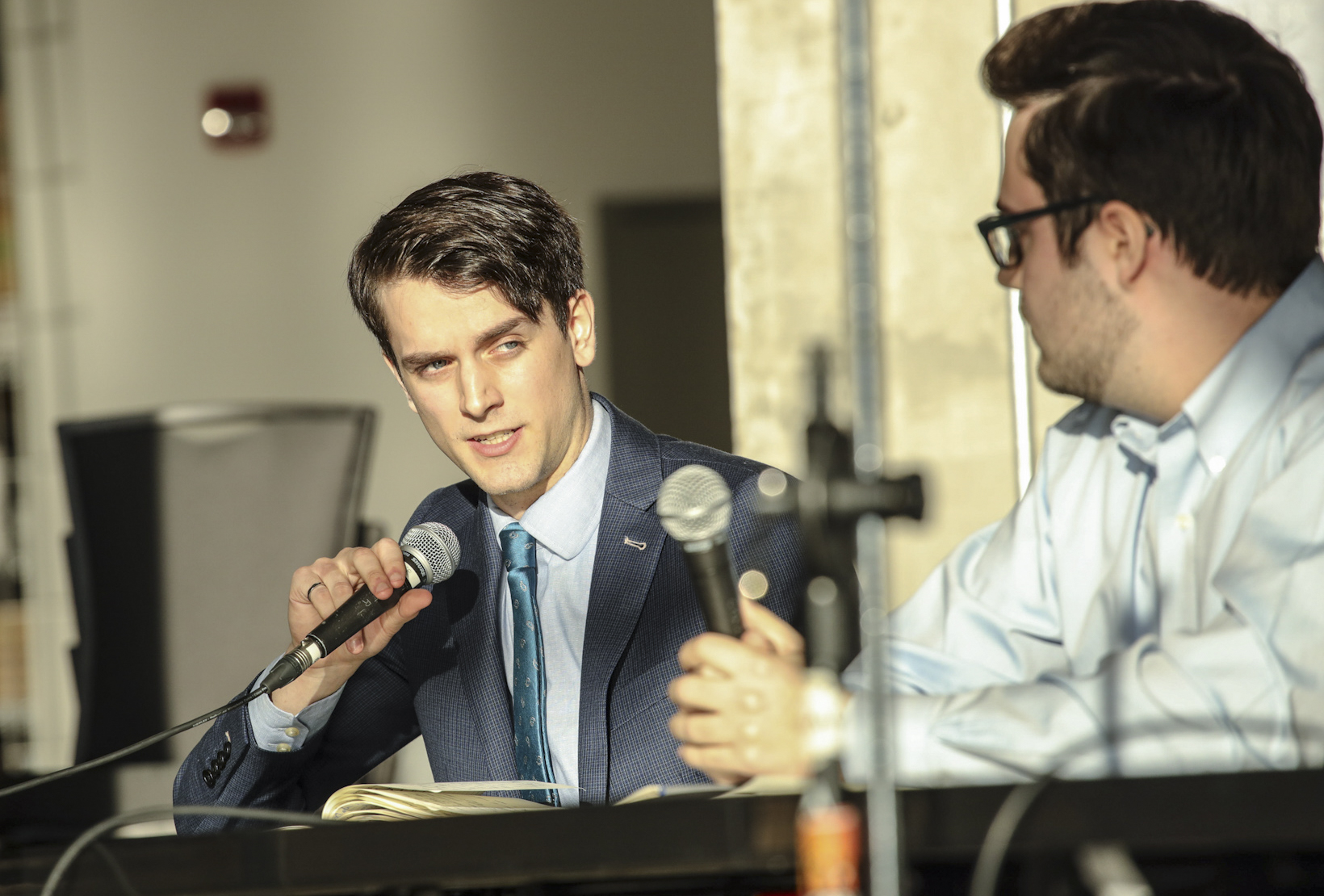 Braam said Holmes had “called councillors into his office to tell them to stop being critical of the AMS exec[utives].” Salomon Micko Benrimoh

Now, at least four other members of council are supporting Braam’s claim.

”I was called into this meeting to have my views shamed for an hour,” said Kate Burnham, president of the Engineering Undergraduate Society.

Arts councillor Andy Wu wrote in a statement to The Ubyssey that he was “unduly pressured and intimidated over my vote in favour of the censure motion.”

“Mr. Holmes acted wholly inappropriately during our meeting,” wrote Wu. “His remarks were counterproductive and hurtful. The tactics of intimidation he deployed were ethically unbefitting to his role as an executive and an elected student leader.”

Current Board of Governors member Jakob Gattinger, who is not a voting member of Council, was also called to a meeting where he said Holmes implied he should have supported the executive.

“The tone was, ‘We never should have been subjected to that kind of thing,’” said Gattinger.

“It felt almost like being called into the boss’s office,” said Braam. “Which, at the end of the day, Council is the executive’s boss and not the other way around.”

“I began every one of these conversations reassuring each councillor that they had every right to bring up the censure motion,” said Holmes in an interview on Monday.

He wrote that the “vast majority of these Councillors told me afterwards that they appreciated my honesty and willingness to speak with them,”

The Ubyssey spoke to nine councillors and members of Council who confirmed they met with Holmes.

Two of the nine sources The Ubyssey spoke to corroborated Holmes’s account of the meeting, calling it an ‘open dialogue,’ but declined to go on the record.

Holmes said he “spoke mostly to Councillors that voted for the censure motion” but declined to provide a full list of meetings he held, stressing they were held in confidence. He estimates he spoke to at least 14 councillors.

“My opponent and every Councillor I spoke with never raised any issues publicly or privately with me about these conversations after they happened,” Holmes wrote.

At least one councillor who voted for the motion of censure also not approached by Holmes.

“Max Holmes did not reach out to me despite my 'yes' vote to censure,” said faculty of medicine councillor Jennifer Ling in a written message to The Ubyssey. “I would have considered it unethical if he had, and would not have agreed to such meetings.”

“I asked whether he was suggesting that the vote was tainted with racist or racially charged motives,” said Wu. “[Holmes] did not respond directly and repeated what he said instead.”

Holmes says he was not accusing councillors of anything and simply intended to illustrate the importance of inclusion in the AMS.

“In my experience in the AMS, often when these people [of colour] serve leadership positions, I do think that they are treated differently.” said Holmes.

“I felt that if we are going to discuss the relationship between the executive and Council, this is something we’ll have to raise.”

Hamid says she was aware Holmes was having conversations with councillors, but was unaware he mentioned her in that context. She does not believe Council’s criticisms were bigoted, but said they could reflect broader “implicit biases.”

“As a woman of colour and as someone has been in the AMS, it is really important that our Board of directors understand why equity and inclusion matters in our board,” said Hamid.

Councillors disputed that this year’s criticism was in any way connected to the President’s identity.

“Some years, councillors are more active in their oversight role than others,” said Burnham.

She pointed out that previous AMS President Tanner Bokor, a white man, faced heavy scrutiny from Council during his tenure.

“It felt strange to hear that [accusation] coming from a white man [Holmes],” said Burnham.

AMS VP Finance Kuol Akuechbeny, who is from South Sudan, said he did not agree that executives should automatically be "protected" from all criticism because they belong to equity-seeking groups.

He pointed out that previous AMS President Ava Nasiri was also a woman of colour, but that Council "was able to work very productively at that time."

During the meetings, Holmes said he and two other executives would have resigned if the motion of censure had succeeded.

Hamid said she “would have considered resigning” if the censure had passed, stressing she felt it “came out of nowhere.”

Holmes originally declined to say if he would have resigned, but later acknowledged he considered it.

“I was one executive who did seriously consider, if the motion have passed, would I want to remain in the organization?” said Holmes.

Burnham said she pointed out that a motion of censure was “one of the lowest punishments Council can offer” but that Holmes did not agree.

“He implied that councillors didn’t understand what they were voting for,” said Burnham.

“Something like that would be so absurd on any other level of government.”

VP External Cristina Ilnitchi said she was aware of the meetings Holmes held, but denied she would have resigned if censured.

On Tuesday, Akuechbeny said he was also aware of the meetings but was unaware any executives considered resigning.

He stressed a need for "executives and councillors to work together" and said that while he supported "different viewpoints" in Council, he agreed with Hamid that the motion of censure should have been discussed in more detail before being called.

VP Administration Chris Hakim did not immediately respond to requests for comment.

Why is it surfacing now?

The meetings occurred between late October and early November, but did not surface until the Great Debate. Sources gave a range of reasons why they didn’t speak out immediately.

Wu said it would have “further jeopardize[d] the reputation and credibility of the Society and students’ confidence in our ability to operate sensibly and ethically and stressed he still believes in “AMS Council’s independence, integrity and competence to hold the executives accountable.”

Others, including Burnham, said they worried more criticism would result in the “nuclear option” of executives resigning, which was never the goal of the motion of censure.

Hamid says she regrets concerned councillors did not approach her.

“I wish folks had actually taken the time to talk to me about this, instead of doing it in the background of elections.” said Hamid.

Gattinger, Braam and Burnham said they felt it important to speak on the issue now that Holmes is seeking a higher office at the university.

“In elections, a candidate can very fairly point that out as a flaw during the elections period … if someone is seeking higher office, there is a higher standard,” said Gattinger.

Holmes did not speculate on why the issue was raised now, but offered an apology to any councillors who felt “uncomfortable” with their conversation.

“I’m not really going to engage in trying to make assumptions on why people brought this up,” said Holmes.

“...[M]y goal at the end of the day [is] telling students why they should vote for me.”

Update, Tuesday March 5 12:24 p.m.: This article has been updated to include comment from AMS VP Finance Kuol Akuechbeny.

Have some thoughts on this election cycle? Submit a letter to opinion editor Tristan Wheeler at opinion@ubyssey.ca