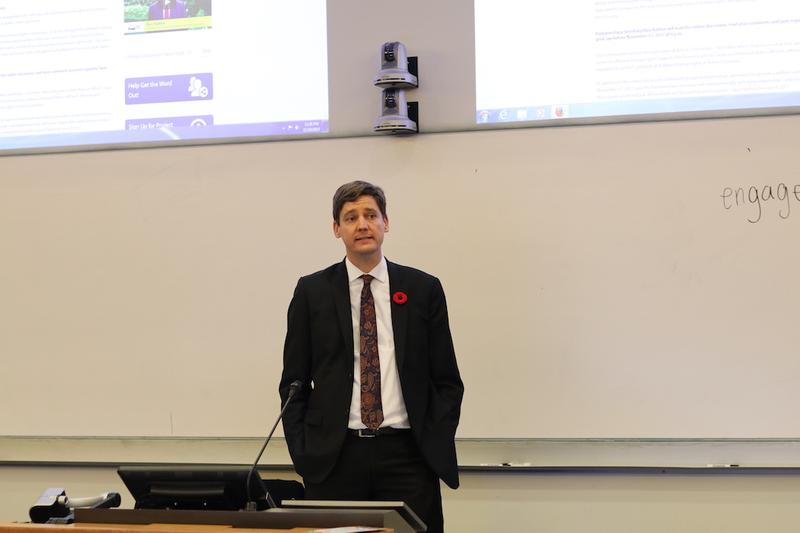 Eby came on Friday to consult the UBC community on the BC Human Rights Commission. Zubair Hirji

Attorney General and Vancouver-Point Grey MLA David Eby came to UBC on Friday to consult the campus community on the re-establishment of the BC Human Rights Commission.

Previously abolished by the Liberal administration in 2002, the commission is now being brought back by the current NDP-Green coalition government. Since September 20, there has been both online and in-person public engagement throughout the province to determine the structure and power of the commission.

Hosted at the Allard School of Law, the event at UBC drew dozens of students, staff and faculty.

“Students on campus [are] from many diverse communities … and I’m sure they have a lot of lessons and advice to share with me and with our government about what the Human Rights Commission should be doing,” Eby said at the press conference preceding the event.

“It’s a very important thing that student’s voices are heard in this process and that’s why we’re on campus today.”

One common question that was brought up by both The Ubyssey and attendees was how to make the commission accessible to people with limited legal knowledge. Eby responded that across the province, consultations are being geared towards people who do not have legal training.

“What we are trying to do is make this commission relevant [on the ground] to people who have been marginalized in different ways — who may not have legal training, who may not have that kind of knowledge and they would need assistance to either bring a complaint forward or even know what their rights are in a specific situation.”

Some solutions that were discussed include creating a brick-and-mortar location for the commission, putting together an accessible information guide and incorporating education about rights into occupation training and business licensing.

Another topic was about how much power the commission should be able to have, with some students advocating for giving it enough power to set its own agenda and be independent from government turnover.

“When the former Liberal government abolished the Human Rights Commission, they took away a really well regarded and often very effective institution for proactive and systemic redress with respect to human rights concern,” she said.

“It’s important that we encourage this government to make the re-establishment of the Human Rights Commission effective and powerful — that is to give it the ability to do proactive, investigative and systemic work to protect human rights in the province.”

Given the legal knowledge already possessed by the attendees, other feedback also went into the specifics of the current legal system and structures that are in place to address human rights concerns, such as the human rights tribunal and legal clinics.

The overall consultation process is expected to end on November 17. During the press conference, Eby stated that a report on it will be issued in early 2018 and then incorporated into the legislation for the commission the same year.

Does the commission matter to students?

According to Young, the main source of human rights protection for students lies with provincial legislation — since universities can’t be viewed as the state, they are not accountable to the Canadian Charter of Rights and Freedoms.

“The Human Rights Code has a broader applicability to the university both as a provider of education and as an employer, so the human rights regime at the provincial level is very important to the university context,” she said.

Young also stressed the importance of the commission’s ability to approach human rights concerns in a systemic and proactive manner, in conjunction with the current case-by-case review that is carried out by the human rights tribunal.

For instance, there are two current human rights complaints alleging mishandling of sexual assault reports by UBC and UBCO that are being processed individually by the tribunal. With a commission, the broader structure of how universities respond to cases of sexual assault can be examined.

“[It] can look at a pattern of cases and say that ‘look, there’s a systemic issue here around how educational institutions are dealing with issues of sexual misconduct, sexual assault, sexual harassment,’” she said. “The commissioner could then talk about what kind of legislative changes are needed.”

However, Young noted that there wouldn’t be a direct channel of accountability between the commission and UBC. Instead, the work of the commission could influence provincial legislation, which then mandates the university’s policies.

“Right now, the government is consulting on what the commission should look like and this is the moment for us all to urge the government to do this job fully,” she said.