East of Blanca: How to vote in the upcoming Vancouver municipal elections

Municipal politics is also the level of governance that creates the most impact on your daily life. File Stephanie Xu

This October, midterms and Halloween won’t be the only things on UBC community members’ mind: many will also be eligible to vote in the Vancouver municipal elections.

While most of the public attention has been on the mayoral race, Vancouverites will also be electing 10 Vancouver City Councillors, 7 Vancouver Board of Parks and Recreation commissioners and 9 Vancouver School Board trustees.

As an even larger number of people are running for these positions, it’s definitely a lot for any one person to keep track of — but municipal politics is also the level of governance that creates the most impact on your daily life, such as issues regarding housing and transit.

City councillors sit on the highest decision-making body in Vancouver. Bylaws and policies they pass affect everything from housing zoning to transportation funding to whether your garbage gets picked up on time.

Parks Board commissioners are in charge of regulating and maintaining the city’s huge array of community centres, parks and outdoor spaces.

School Board trustees set the direction for one of BC’s largest public school boards, which oversees “elementary, secondary, community, and specialized education services in [Vancouver], the UBC Lands and University Endowment Lands.” If you went to a Vancouver high school and remember ever being frustrated by lack of funding, poor facilities or bad policy, you already have an incentive to vote.

The mayor has a leading seat on City Council and help guide the city’s response to its most crucial issues, from the lack of affordable housing to the opioid crisis to the public transportation that brings you to class every day.

To vote in this election, you must be 18 years of age or older, a Canadian citizen and a BC resident for the past six months.

You also need to have lived in or owned properties in Vancouver — meaning east of Blanca Street — for at least 30 days right before registering to vote. If you live west of Blanca, you can vote for School Board trustees, but not for any of the other positions.

In lieu of those, you can normally vote for the administrator of Electoral Area A, a multi-zone entity that includes the campus and endowment lands — but Justin LeBlanc has already been acclaimed as its director as of September 24.

Following these requirements, you also need to provide two valid identification documents to vote — regardless if you have already registered to vote or if you’re going to register in person immediately before voting.

If you have already registered, you will also need to bring the completed registration form to the voting location. Obviously, the upside to registering ahead of time is that it will speed up the voting process for you. 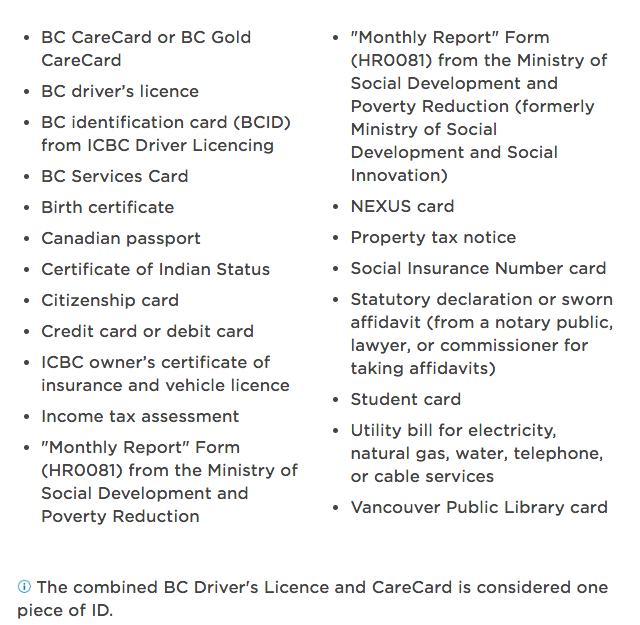 If you only have one acceptable identification document, “a Declaration of Elector Identity and Place of Residence in front of a Presiding Election Official at the voting place” could be accepted as the second ID — but only one declaration will be accepted.

For those without a fixed or postal address, you can provide the address of the shelter or social agency you use. You will still be required to “provide identification or make a sworn declaration.”

When can you vote?

While most of the excitement is building up to October 20 as the official Election Day, you can vote in advance between October 10 and 17.

For those who are restricted by availability or accessibility issues, there is also the option to vote by mail. For this option, you would have to apply for a mail ballot — a process that will be open until 12 p.m. on October 19. If you can’t receive mail during this period, you can also have another person retrieve the mail ballot as long as their name is included in your application.

Starting from October 2, mail ballots will be available to be delivered or picked up at the Election Office, and they must be mailed back and received by 8 p.m. on October 20.

Where can you vote?

To figure out which location would work best for you, the Vancouver City Council has put together a searchable map and a list — which also include information about parking and wheelchair access — of all voting locations.

Closer to campus, you can vote for the nine School Board trustees at either the AMS Nest or University Hill Secondary on October 20.

More information can be found at https://vancouver.ca/your-government/2018-election.aspx. The Ubyssey will also be covering the municipal elections with the “East of Blanca” series.

The article has been updated to clarify the registration process to vote.