In Great Debate, many Senate candidates lacked originality and specificity 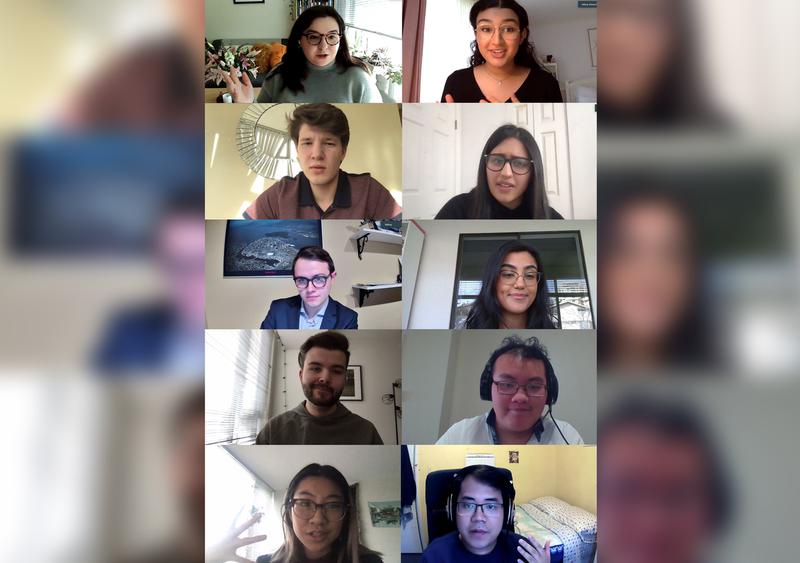 Ten candidates are in the running for student senator-at-large. Jasmine Foong

In their final debate, ten candidates for five student senator-at-large positions again found consensus on almost every issue, but the knowledge gap between Senate insiders and outsiders became more apparent.

In response to a question on which recommendation from the 2019 ombuds report candidates wanted to address, three of the first five candidates to answer said fixing the appeals process in Senate, leading moderator and Ubyssey coordinating editor Pawan Minhas to request that the remaining candidates elaborate on how they intend to address the issue.

Minhas made similar comments as candidates provided the same answers to his next two questions.

Despite the consensus, the incumbents often had more specific answers.

When asked about the ombudsperson’s report, Korniiashik admitted that he was unfamiliar with the document before echoing Sandhu’s earlier point about the struggles international students face accessing appeal resources in different time zones.

Cantiller shifted the focus on reforming Policy J102 which outlines examination hardships, acknowledging that it didn’t relate to the main issue.

“Being a totally new candidate, this is another barrier of researching the Senate — a lot of documents,” said Cantiller.

Meanwhile, Yee, Mehta, and Ho all pointed out a need for a more equitable approach to academic misconduct and appeals.

In a back-and-forth Agosti-Moro and Yee discussed issues with appeals.

“International students have been made to engage in appeals meetings or academic discipline meetings in the middle of the night,” said Yee, calling for the establishment of a standard practice.

Agosti-Moro asked Yee to expand on this and provide examples, claiming that throughout his work on three committees this year, he had not heard of such a case. Burnham jumped in and clarified that Yee may have confused the President’s Advisory Council on Student Discipline with the Senate appeals committees.

In a message sent to The Ubyssey following the debate, Yee acknowledged that she had potentially conflated the two, but stressed that this comment was based on what students had told her during consultation as VP AUA. She also said that the disciplinary hearings were referring to were part of the ombuds report.

On the issue of students butting heads with faculty in the Senate, Evans, Agosti-Moro, Bhangu, and Burnham cited their past experiences to stress the uphill battle of being excluded from consultation.

Evans and Burnham said they’ve both been able to “earn” respect from their colleagues in the Senate.

Sandhu responded to the same question by saying that it’s essential to take time to reflect on a situation in order to mitigate it. She also suggested that prior to Senate meetings one could think of strategies to address any potential conflicts that might arise — something she said becomes easier to do once you’ve worked within the Senate for a bit.

Many non-answers emerged from this question, which specifically asked how candidates could accomplish goals with faculty and convocation senators , from experienced and non-experienced candidates alike.

Cantiller did not say how he would work with faculty senators who he disagreed with, instead stating that solidarity between student senators and the student body would help facilitate student advocacy. He proposed expanding social media outreach to achieve this goal.

Both Bhangu and Agosti-Moro agreed that setting term limits for faculty senators would help change the culture and perspectives on the Senate, but did not provide details on how they would achieve such a policy.

But incumbents still took the chance to challenge each other. When asked about which academic policies established during the pandemic should remain long term once classes return in person, Evans spoke of the need for UBC to maintain its compassionate approach in academic concessions towards students affected in some capacity by COVID-19.

Burnham responded to Evans’ concerns, noting that these compassionate concessions are already in place but that they are not always implemented correctly due to misinterpretations of Senate policy.

“As we think about all these policy changes and pieces, we also need to be understanding in our roles as senators to be doing changes towards the communication piece,” she said.

Voting online begins on March 1 and is open until March 5. This article is part of our 2021 AMS elections coverage.

This article has been updated to reflect that Sandhu did provide tangible steps to addressing conflicts within the Senate. The Ubyssey regrets this error.