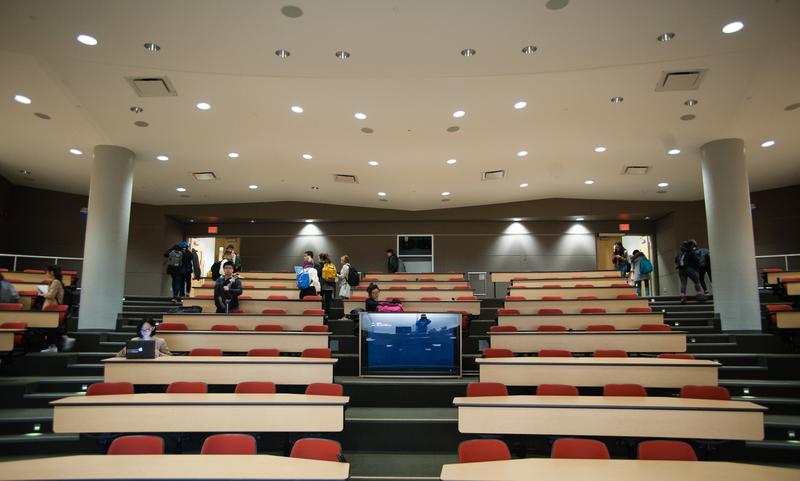 The Senate’s Academic Policy committee is discussing if a recent directive from the PWIAS Board of Trustees contravenes the Institute’s mandate — and what Senate can do about it. File Zubair Hirji

UBC’s highest governing body is looking into threats to academic freedom at the Peter Wall Institute for Advanced Studies (PWIAS).

The Senate’s academic policy committee is discussing if a recent directive from the PWIAS Board of Trustees contravenes the Institute’s mandate — and what Senate can do about it.

“The most charitable way to put it is that the optics are appalling,” said senator and mathematics professor Dr. Philip Loewen.

Loewen brought the concerns to the committee following a November 21 general Senate meeting, arguing the Senate should intervene if the Institute’s independence is being threatened.

The PWIAS was established by the Senate on February 16, 1994 and endowed with the equivalent of $15.4 million from Peter Wall in the form of cash, property and shares of the Wall Financial Corporation. It is part of the UBC VP Academic portfolio, but its governance is overseen by a five-member Board of Trustees and its interdisciplinary research is explicitly independent from UBC projects.

“‘Research that doesn’t happen anywhere else’ is the Institute’s founding mandate,” Loewen added. “And research [in clusters] is 100 per cent happening somewhere else because the university has already endorsed and funded it.”

At the Senate meeting, Ono asserted that the clusters would not limit the PWIAS’s scholarship.

But at a Board of Governors committee meeting on November 26, it was acknowledged that the 33 existing committees have gaps in areas they fund, particularly the humanities.

Tortell’s resignation precipitated over a hundred letters from Wall Scholars and faculty concerned about academic freedom. Earlier this week, the Canadian Association of University Teachers also called for the UBC Faculty Association to gather further information.

“Our concerns, as described in the letter, are largely in relation to ensuring that academic freedom is upheld and proper governing structures are in place for the implementation of the strategic plan,” said UBCFA President Bronwen Sprout in a statement to The Ubyssey.

On November 22, Ono announced that Wall Scholars recruited for the 2019 program will not be expected to align with existing research clusters. He further clarified on November 27 that the Board “plans to develop a series of dialogues to explore opportunities to strengthen the distinctive nature of the institute” over the next few months.

But as the Institute’s programs and independence are still at risk, Loewen says the Senate is obligated to act — even if the extent of its power in this situation is unclear.

“I worry about the Senate’s ability to do a formal investigation,” said student Senator Jeanie Malone, who sits on the academic policy committee. “... I’m not convinced the Senate has all the resources to make that happen and I’m not sure what it would find.”

Still, Loewen hopes that the committee can at least make the facts known.

“It would probably be rash to speculate,” said Loewen. “...We need to do a proper investigation, but the appearances as of this moment are that the university has opted to take that money and do something quite different from what the donor agreed.”

Beyond addressing the situation at hand, senators are establishing a safeguard to respond to future concerns over research independence.

The academic policy committee is set to propose the formation of a Senate research committee at UBC Vancouver — something which many feel is already long overdue.

“It seems like what ‘research’ means is enshrined in a number of different areas,” said Malone.

UBC is one of the only universities in Canada whose Senate does not have a research committee, meaning issues like this fall automatically to the catch-all committees like academic policy.

“I was very surprised that it somehow is the jurisdiction of academic policy,” said Malone. “To which I have now learned that anything that doesn’t have a specific policy is academic policy.”

UBC’s Board of Governors — which deals with the financial management of the university — has a Learning and Research Committee. But UBC’s Vancouver Senate doesn’t, even though its Okanagan equivalent does.

“Research is a stated high priority for UBC,” said Loewen. “For it to be such a front and centre element of our daily work and our Strategic plan and not have overview from the Senate is just strange. And that strangeness is multiplied when the Board of Governors has a research and learning committee.”

It’s unlikely that a research committee could become a reality until at least the next academic year. But Senators hope that a committee tasked specifically with research could at least prevent this from happening again.

"The Senate is slow-moving by design and it's often very hard for any substantive changes in the committee structure or any number of things to happen," acknowledged Malone.

Pending confirmation, these items are expected at the December 12 Senate meeting.

A previous version of this article misstated the date of the upcoming December Senate meeting.