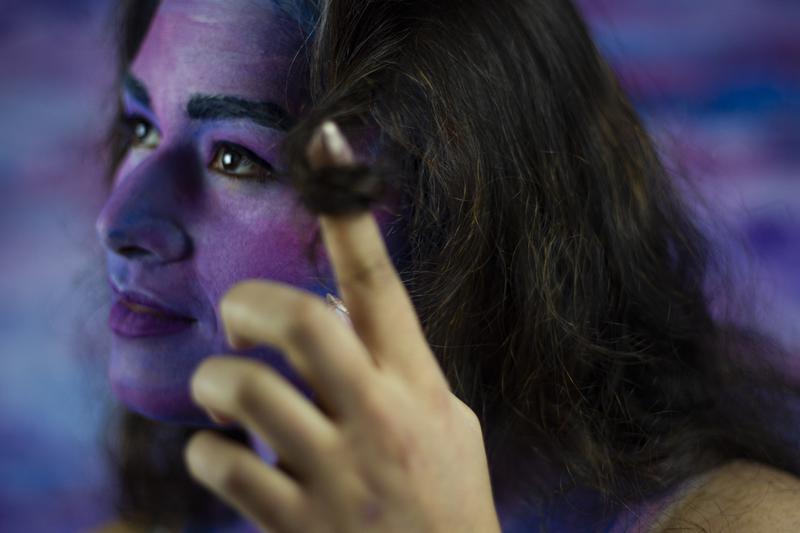 “You do know that all female newsreaders are supposed to be slim, trendy and attention-grabbers, right?” Elizabeth Wang

“You do know that all female newsreaders are supposed to be slim, trendy and attention-grabbers, right?”

My hand froze mid-air with fried bhatura between my fingers, filled with chickpea curry dripping on all sides. The leavened bread made from flour and baking yeast had my stomach taking a similar shape halfway through the meal. And now here it was, all the knots in the right places. But I knew this was bound to take place eventually.

I looked to my left and caught my mom’s eye. She was dreading this very moment. Those black pools were pleading me not to argue or create a scene. We were the hosts after all, entertaining my uncle and his not-so-pleasant company. I turned my head and looked straight into the face of this man who made the comment, blissfully unaware that his words did not sit well with this crowd.

For a split second I thought of walking out before the conversation even started — what, in my opinion, would have been the best decision for all. But I was never the kind to pull a spontaneous stunt. The most impulsive thing I had ever done was to submit an assignment late, purposefully. As an afterthought, I realized getting drunk with my parents in the neighbouring room could top that category as well.

So I sat there with pursed lips which, while chewing my food with a force, were also begging for mercy to be laid down my throat.

“Yes, Uncle, I am working on it.” I was surprised my teeth were still intact.

As soon as my words reached all ears in the room, I mentally kicked myself and changed the direction of the colourful words roaring in my head, towards me for being so pitiful. A smart journalist would have fact-checked his statement then and there. But hey, it’s the post-truth era and I cater to my audience.

I am fat enough that I need to pick clothes from the plus section or wait for another trip in a slightly crowded elevator, but not so much that I would require two seats on a plane or have difficulty in tying my shoelaces.

Contrary to popular belief, I don’t get mad at being called fat. The same way I don’t get mad at being called tall. An adjective like any other, the word accomplishes its task but sadly carries the burden of a negative connotation. My annoyance and displeasure at those who fat shame stems from their stubborn inability to comprehend the fact that fat people have a life, both personal and professional, regardless of their issues with weight management.

Lost in this train of thought, I was brought back to reality when my brother nudged me with a worried look on his face, one which meant he would pounce on the guy if the need arose.

At this point I was sitting awkwardly at the dining table, hoping that my small piece of bread would last long enough that my plate did not look empty and, at the same time, not too full.

“You live right by the beach here. You should run on the water. It will help you shed some kilos faster,” my uncle said, smiling delightedly as though his words gave me all the comfort I was craving. Some silence would have done the job.

This was no new setting to me. For as long as I have been able to make sense of alphabets and numbers — and my math is pretty strong — I have been the subject of discussion that tables at least 60 minutes of every social gathering. By the end of the night, my poor mother has endured recommendations of three different diets, a couple new recipes and a few decisions involving changes in my lifestyle.

If I had a dollar for every time my weight was brought up, I would single-handedly be able to solve the climate crisis.

Nonetheless, I found this suggestion amusing — it was the first new one in a very long time. I tried to imagine myself at the beach running, with the sea pulsing, crashing wave upon wave against the immovable rock. It suddenly occurred to me that my family and friends have been my rock and my once-in-a-blue-moon guest, the sea.

My parents have always been steady and unmoving, constant in their love even when words were hurled at me like shards of a broken mirror. I’ve fought with them, had disagreements, gone days without eating to prove a point and yet, it never changed anything. I understand their concerns and their priority of my well-being.

My relationship with my occasional guests on the other hand has been volatile from the very beginning. Hot, cold, on, off, not too warm but a bit too cold. And that was the problem. They haven’t been there for me during the hardest times and their intentions pure as inhalable carbon dioxide.

“I’ll definitely try that out, Uncle. How is Neha’s civil services preparation going?” I asked.

Growing up in an Indian household, I learned at a young age that if you don’t want someone prying into your personal life, you shift the focus and give them an opportunity to gloat about their children.

And suddenly, the conversation had shifted gears and I felt lighter than ever before.