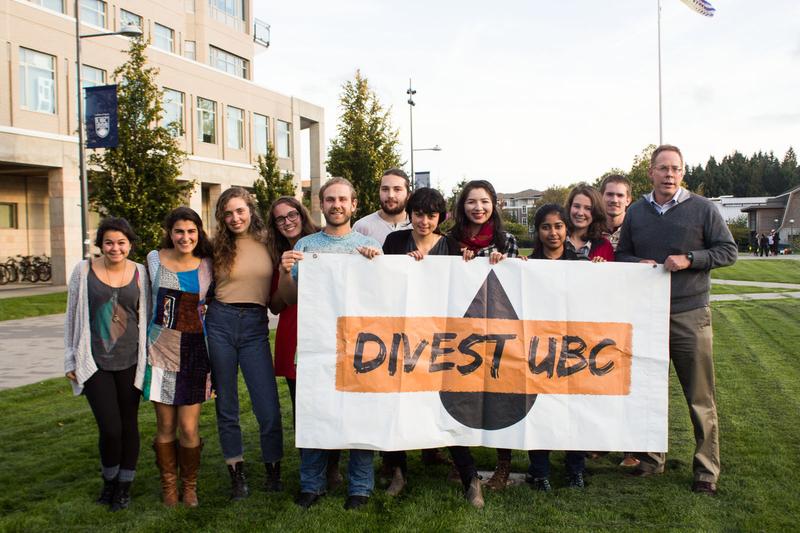 In 2014, a referendum on the divestment received support from 76.9 per cent of students and 61.9 per cent of faculty. File Cherihan Hassun

Fossil fuel divestment is once again a hot topic of discussion for candidates in the AMS elections.

Three years ago, the UBC Board of Governors rejected a student and faculty proposal for the university to cease future investments in fossil fuel companies and to divest from current fossil fuel holdings within five years.

But this past year there has been a renewed advocacy effort pushing the university to divest, fuelled by campus groups. During this year’s AMS elections, many candidates have made it a central part of their electoral platforms or expressed this sentiment during debates.

Some are especially focused on the legal opinion underpinning UBC’s decision.

“It’s critical for UBC to not only ask their own legal council to put further research into divestment, but to also seek more legal opinions … to see if this is a feasible idea,” said presidential candidate Chris Hakim.

During an interview with The Ubyssey, Board of Governors candidate and current VP Academic and University Affairs Max Holmes said he wanted to push the Board to form a new legal opinion, possibly with assistance from the Student Legal Fund Society, for which he is also running.

At the Great Debate, Holmes and fellow Board candidate Dylan Braam also sharply criticized the legal opinion that UBC used to justify its divestment decision, with Braam saying it was based on a “decades-old understanding of fiduciary duty.”

During the February 2016 meeting, UBC’s Finance Committee advised the Board that divesting “would not be consistent with the board’s fiduciary obligation to endowment donors.”

In response, two Allard School of Law professors criticized the comment in a 2016 Ubyssey opinion piece.

“This statement is perplexing because the university does not owe such a legal obligation,” reads the letter.

It also argues that if UBC owes a fiduciary obligation to anyone, it would be to students and faculty as they are “intended to benefit from the purposes of the trust.”

UBCC350, a climate action student group on campus that has spearheaded the call to divest, pushed back against the Board’s opinion in a 2016 open letter.

“The Finance Committee’s interpretation of fiduciary duty directly contradicts an external legal opinion received by the University of Toronto President’s Advisory Committee on Divestment, which finds that divestment is consistent with fiduciary duty,” reads the statement

The group added that the claim is contradicted by the committee’s own brief.

“It is not appropriate for UBC to comment on another institution’s legal opinions,” he said.

Following the rejection, the Board of Governors did set up the $10 million Sustainable Futures Fund, which is specifically for investing in sustainable initiatives. Since then, the Board has also reduced the fund’s administrative charge and increase the fund’s sped rate to draw more attention to the fund.

He is also co-hosting the “UBC School Strike for Climate Emergency!” event as part of a global student strike movement.

“It’ll also require probably the largest global effort as well so it's bigger than UBC ... there are a lot of student movements all over America and Europe,” Latu said. “And I think that it's just whether or not we can add the AMS into that in a serious and meaningful way and bringing student consciousness to it.”