‘Holding a mirror up to Canada,’ UBC hosts conference on MMIWG Inquiry 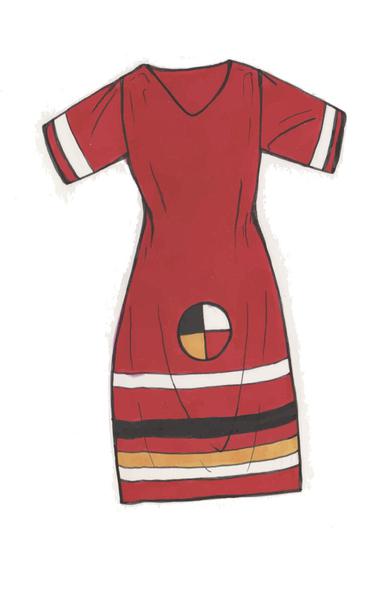 Jaime Black, a Métis artist based in Winnipeg, installed hundreds of donated red dresses across Canada as part of the REDress Project, a reminder of “the women who are no longer with us.” Dakota Bird Anderberd

Marion Buller, the chief commissioner of the National Inquiry into Missing and Murdered Indigenous Women and Girls (MMIWG), made her first academic appearance at a conference on campus shortly after the release of her final report.

On June 10 and 11, the First Nations House of Learning collaborated with Georgetown University to present “Missing and Murdered Indigenous Women: An Epidemic Crossing the Medicine Line. Buller and North Dakota state representative Ruth Buffalo were featured as keynote speakers.

With guests from various backgrounds — elders, politicians, scholars, survivors and dancers — the conference compared the issue of MMIWG in Canada and the United States and how each country is working to address the problem.

A member of the Mistawasis First Nation, Buller emphasized the human side of her work for the National Inquiry, thanking survivors who came forward to tell their stories.

“We're holding a mirror up to Canada,” she said, encouraging the audience to read the report — especially its 231 actionable Calls to Justice.

“We have to know the truth before we can get to reconciliation.”

“I know it’s like 1,200 pages, [but] read it! Before everybody starts with their comments of ‘too much money was spent’ or whatever the things you see, read what’s in it,” she said.

Not ‘your typical academic conference’

A member of the Three Affiliated Tribes of North Dakota, Moss came to UBC in 2018 after spending much of her career in the US. She admitted that when she first arrived in BC, she didn’t even know a Canadian National Inquiry into MMIWG existed.

After the final report came out on June 3, Moss said she was inspired to host an event that would spread similar awareness to the US.

“It's important to recognize that it's even happening,” said Moss.

“For instance, in the US, I could probably go through 12 states and ask people, ‘Did you know that there are missing and murdered Indigenous people?’ They wouldn't know. I bet you the first hundred people I talk to, they wouldn't even know.”

Another keynote speaker Ruth Buffalo, who is also a member of the Three Affiliated Tribes of North Dakota and the first Native American woman to be elected to the North Dakota State Legislature, shared Moss’s sentiment. In her speech, she talked about her journey to power and her struggle to make the issue of MMIWG better understood among her colleagues.

Annita Lucchesi, a Cheyenne academic and the Executive Director of the Sovereign Bodies Institute, followed with an explanation of her work compiling the MMIW Database. The database tracks cases of missing and murdered Indigenous women, girls and Two-Spirit people since 1900.

For Sofia Santamaria, a fifth-year double major in history and political science, the conference was raw and personal.

“It was affected family members, it was activists of communities, it was people coming forward and saying, 'Hey, I was forced away from my family when I was six years old. I was taken and put into a forced foster care system, and after that, I saw how the violence was repeated in my family as a cycle.'”

Because of its traumatic subject matter, three counsellors were available throughout the day to support speakers and attendees.

During a question period with Buller, Franz-Edward Kurtzke, a philosophy student and men’s rights activist known for his protests on campus, brought up the struggles of Indigenous men and boys.

Citing the research of UBC Okanagan political science professor Adam Jones that found over 70 per cent of missing and murdered Indigenous people are males, Kurtzke said he’s “very concerned about the discrepancy between [the research and] what I'm seeing in media, which rarely if ever mentions men or boys.” He asked whether Buller found similar figures.

Buller responded that she’s learned to be “skeptical” of numbers because many missing persons cases are not reported to the RCMP, and victims are not always identified as Indigenous. But she added that while men and boys were not the primary focus of the report, they were certainly included.

“I can tell you also that we heard from family members and survivors … Of course they cared about the aunties that went missing or were murdered or just suddenly disappeared, [but] we also heard about a cousin who went missing, a brother who was murdered, and uncle who has never been seen again,” said Buller. “So very rarely did a family member or survivor come forward and talk about only women.”

In her interview with The Ubyssey, she added that investigating Indigenous men and boys simply wasn’t the Inquiry’s mandate by the Canadian government.

“There were four decades [of] activists who lobbied for this National Inquiry into Missing and Murdered Indigenous women and girls, and it was also one of the Calls to Action from the Truth Reconciliation Commission to look at, specifically, violence against women and girls. So it was very much a political decision,” said Buller.

“Our terms of reference said ‘Indigenous women and girls,’ so that's what we had to do.”

Later, after Buffalo’s keynote speech, Kurtzke asked why Indigenous missing and murdered cases deserve special attention, a question that she mentioned she often hears from colleagues, but didn’t answer explicitly in her speech.

Santamaria said that Kurtzke’s questions may have been well-intended, but it was not the proper time or place for debate.

“[He asked], ‘Why are we talking about missing and murdered women, when men die too’ ... right after a lady had cried because her sister had been murdered,” she said.

Both Buller and Buffalo answered Kurtzke’s questions without incident.

The event was temporarily derailed when a verbal altercation broke out among Kurtzke and other attendees.

Two women from the audience confronted Kurtzke, accusing him of making the conference about his own agenda in an Indigenous space. He responded by saying they were targeting him as a white man. Moss and other event organizers then asked Kurtzke to leave, but he refused and continued to resist when Campus Security arrived.

“On June 10 an incident occurred and an individual was subsequently asked to leave by staff and Campus Security. RCMP were contacted when that individual refused the request,” wrote Acting Director of Campus Security Ali Mojdehi in a statement to The Ubyssey.

Kurtzke said his refusal was based on principles of “civil disobedience,” and that he was expelled because he questioned the MMIWG narrative.

“[They]'re ganging up on me. [They]'re bullying me, because [they] don't like what I'm saying. [They] don't like the things I'm asking as a trained philosophy student in university,” said Kurtzke in an interview.

When RCMP arrived and told him to leave, Kurtzke refused. RCMP then handcuffed him and walked him out of the building.

“He was causing a disturbance and there was also mischief involved, so his stated goal was, he told us, to be arrested. He wanted to make a point,” said Constable Ian Sims, an officer on the scene.

Kurtzke claimed he had been charged with mischief by the Crown and the charges were later dropped, but the RCMP said no charges were filed.

“He said, ‘I don't have any intention of going back. I just wanted to make my point,’ which he did, and we said, ‘We don't anticipate charging you if you're going to agree not to go back’ and so it worked out well,” said Sims.

To distract from the disruption, a group of Indigenous dancers began to perform as Kurtzke was handcuffed and walked out of the Longhouse.

Cherrah Giles, a legislator on the Muscogee (Creek) National Council who was invited to speak at the conference as a panelist, said Kurtzke is a distraction that Indigenous people need to learn to ignore.

“We're going to keep having those distractions, we need to let them go, our energy needs to be with our sisters,” she said. “Because we know the stories, we know our sisters, we know our aunties, but now we have to put it into numbers and prove it to these officials. There's just not enough of us to do this alone.”

The First Nations House of Learning declined to comment on the altercation, but overall, Moss said she was pleased with how the event went. Buller agreed.

“I always enjoy being at the Longhouse. It’s one of the most beautiful buildings I’ve been in in Vancouver,” Buller said. “I’m always happy to go, whether I’m a speaker or an attendee at a conference or a meeting.”

But she’s not surprised that the conference got tense and emotional.

“We're talking about women and girls, and 2SLGBTQQIA+ people who've been murdered, in many cases brutally murdered, and individuals who have gone missing and not heard from and families who are absolutely distraught,” said Buller.

“We're talking about violence, and that's a heavy topic.”