The Ubyssey surveys student’s substance use 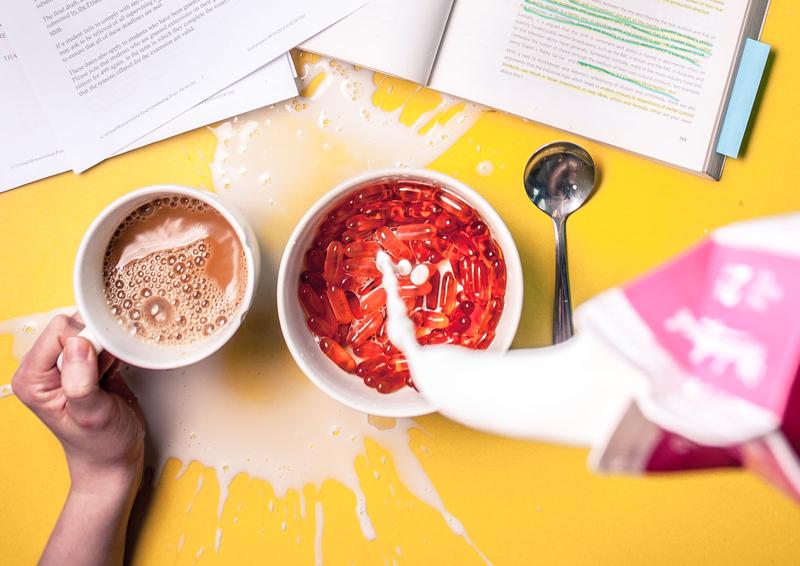 A survey run by The Ubyssey indicates that while most UBC students are average users of alcohol and other substances, a small percentage are using them to excess — sometimes as a coping mechanism for school-related stress.

The Ubyssey received responses from over 400 UBC students on their drug and substance use. We collected the information over the course of three weeks in December, gathering responses from online UBC communities on Reddit, Facebook and Twitter. We focused our questions on alcohol, cannabis and ‘study drugs’ like Modafinil and Adderall because of their common use among students and because all three are legal or soon to be legalized in Canada. We avoided asking about illegal substances because we recognized that students who use them are probably unlikely to share that information in a survey.

Collecting this type of information via Google Forms, where we can’t interview respondents directly, isn’t ideal — but it revealed interesting and compelling trends about student substance use.

Alcohol use on campus appears to be markedly polarized. 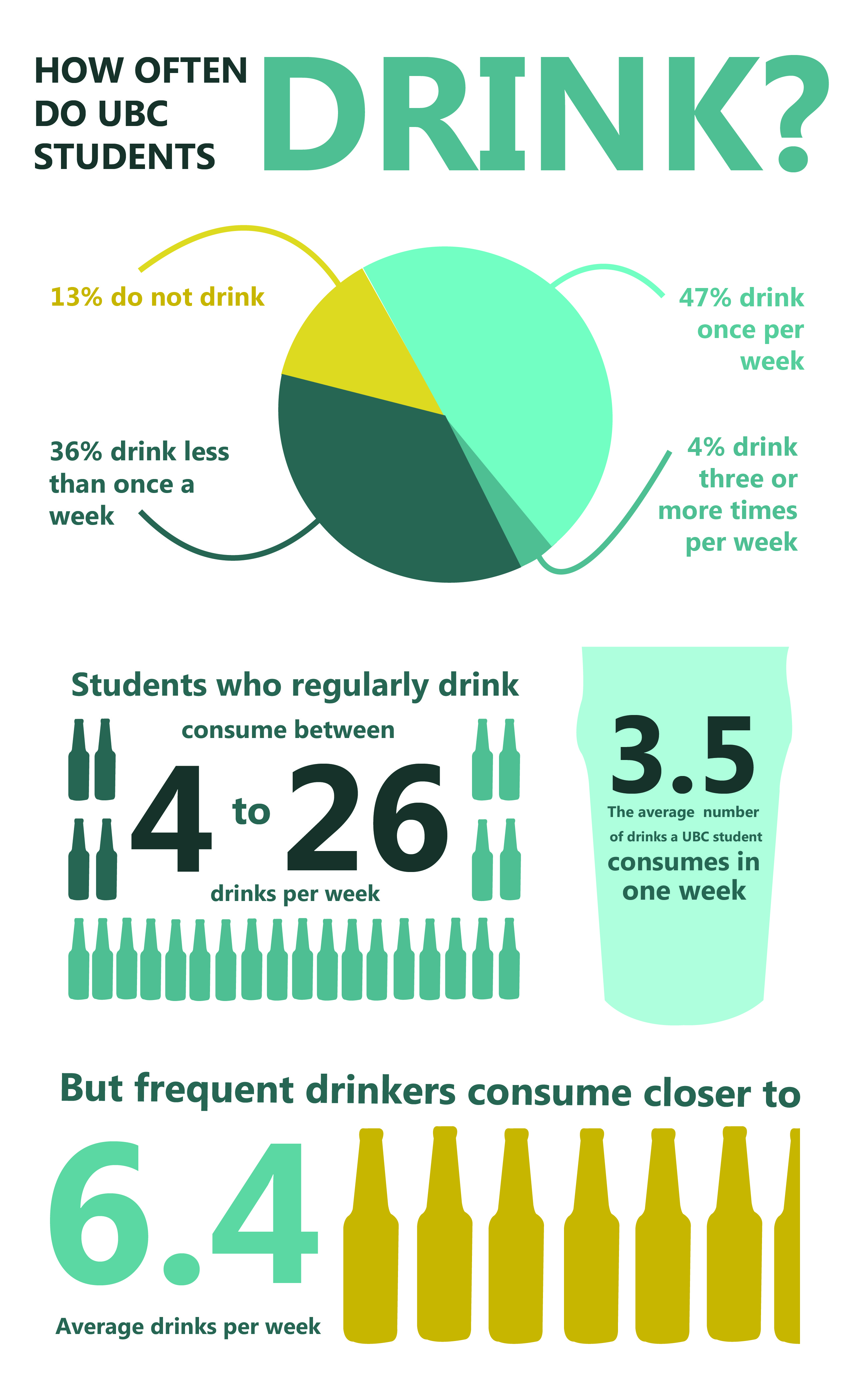 The common perception is that UBC has less of a ‘drinking culture’ than other major Canadian universities; Maclean’s listed us as Canada’s second worst school for partying in their 2016 report. In line with that, 13 per cent of participants in the survey reported that they did not drink.

“Drunks are rude and inconsiderate, especially when they’re young people like at UBC,” said one respondent. “I don’t need that negativity in my life”

“Heavy drinking is very, very normalized in the UBC population,” noted one respondent.

What students seem to agree on is that the campus culture around alcohol is less than healthy — arguably because students have little opportunity to learn to drink responsibly.

“A [student’s] only two options is to go to the frats or have a gathering in their rooms in residence,” wrote one respondent. “So they basically have two unideal options to consume substances and socialize.”

The rate of cannabis use on campus was lower than you might think. 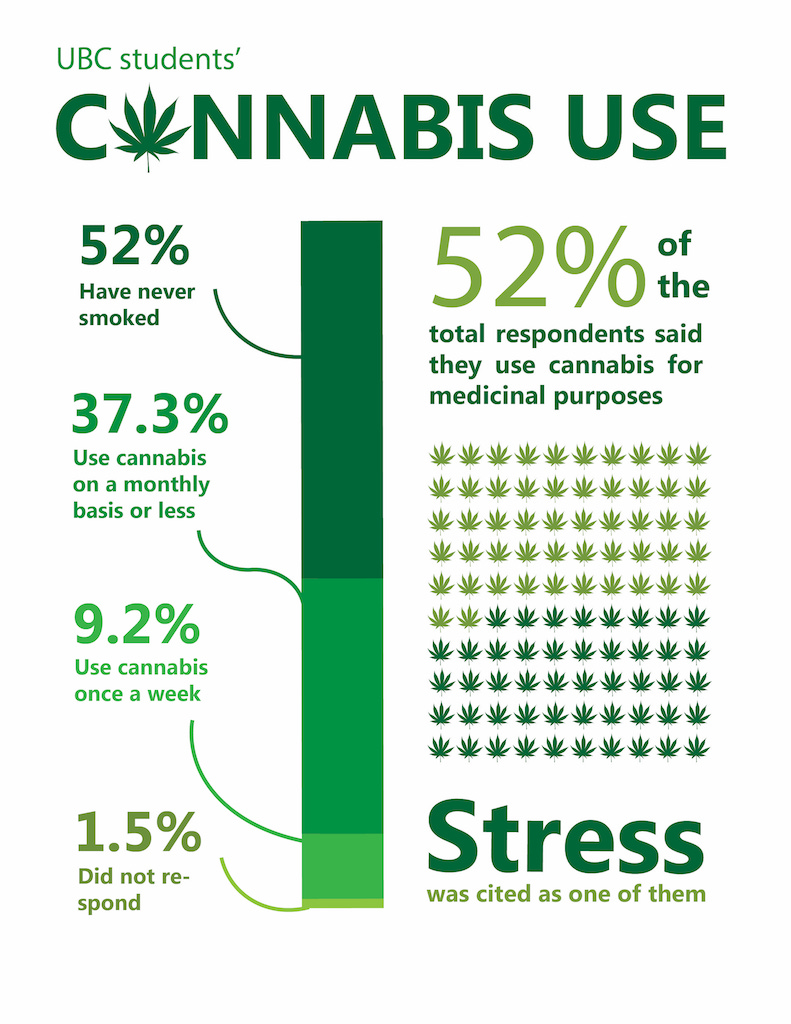 Fifty-two per cent of respondents said they’ve never smoked or otherwise taken cannabis, and 37.3 per cent use it on a monthly basis or less. But this still a lot higher than figures from the Canadian Centre on Substance Use and Addiction, who found that just over a quarter of Canadian youth between the age of 18-24 are users.

An outlier category of 9.2 per cent reported using cannabinoids at least once a week, many of them as often as three or four times a week. In this grouping, the leading cause of usage was not recreation, but often stress.

“I’m in [computer science] and I have to smoke weed every night to calm myself from the stress UBC gives me,” wrote one respondent. “This is the only way for me to maintain an 80+ average.”

“Study drugs” refers to amphetamine-based prescription substances like Modafinal, Adderall and Ritalin. While these drugs are typically prescribed to treat ADHD, more and more students are using them as performance enhancers to increase their energy and focus while studying or working on assignments. 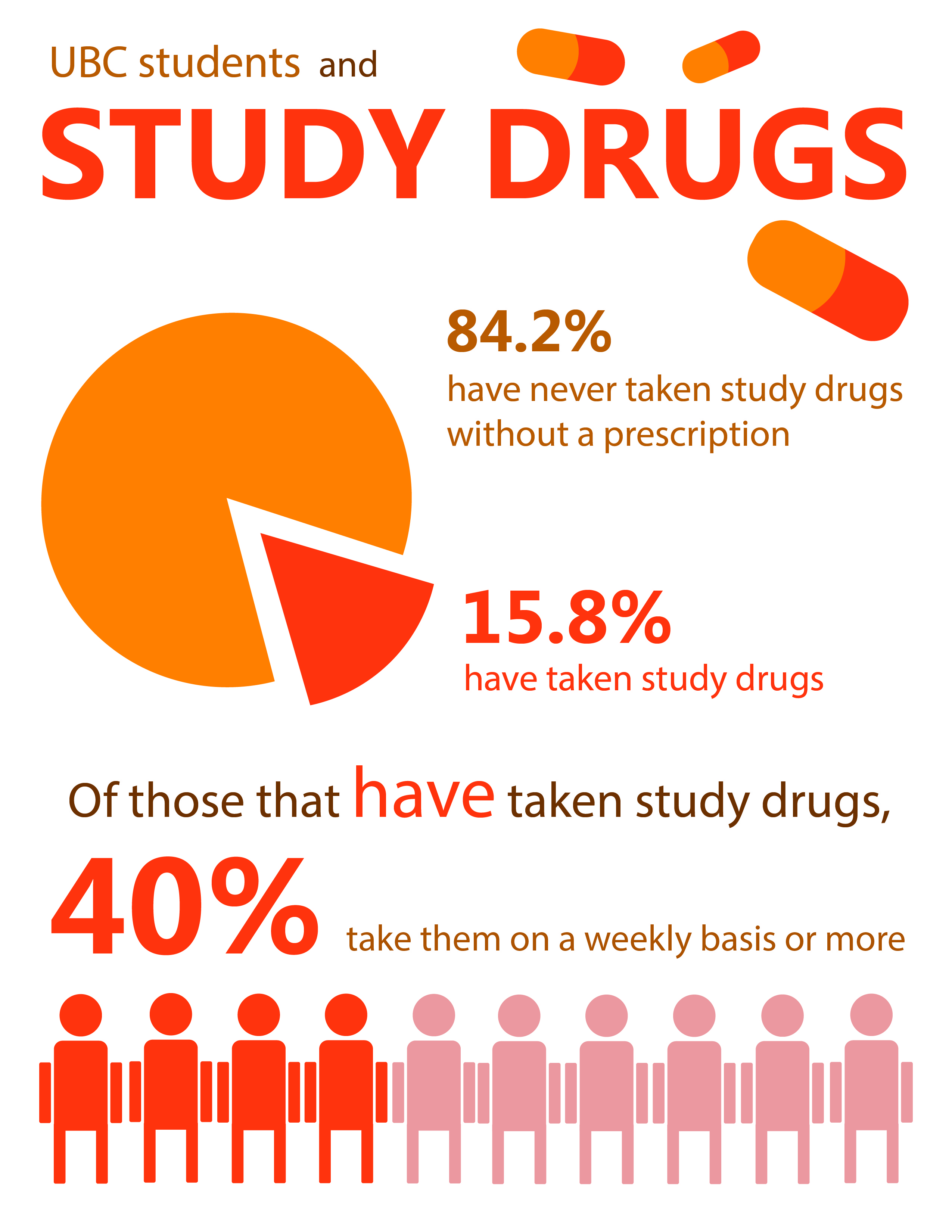 The usage rates for study drugs among respondents was a great deal lower than alcohol or cannabinoids, where 84.2 per cent said they had never taken study drugs without a prescription. But there doesn’t seem to indicate a lack of demand.

“If you have prescribed stimulants, some people pretty much throw their money at you to get some,” wrote one survey respondent.

As with alcohol and cannabis, there was a noted subset who use extremely frequently. Forty per cent of users report taking study drug on a weekly basis or more, and many indicated they used study drugs to support their intense professional commitments.

“Booze and Modafinil are the two things that get me through school,” wrote one respondent. “Having a job, maintaining relationships, be [sic] active in the school community, and getting good grades takes a lot of time and usually sleep get[s] reduced.

“So, Modafinil keeps you awake and booze helps with the stress of having such a full plate during the school year.”

In general, respondents were either extremely light or extremely heavy users of alcohol and substances — but almost every student who does drink has engaged at one point in binge drinking.

While the vast majority of students use either alcohol or substances, only 27.4 per cent said they were universally comfortable discussing them. In the comments, students also called for increased discussion and awareness of the realities of substance use.

“A lot of students don’t recognize their limits and often consume alcohol and substances to the point of poisoning or overdose,” wrote one respondent. “There doesn’t seem to be enough education at UBC around substance use.”

UBC offers a variety of programs through various departments to improve awareness around student substance use. These include a health and safety presentation to all Jump Start participants, open consultation through the Nurse on Campus program offered by Student Health Services, and ongoing awareness campaigns on alcohol usage in UBC residences.

The university is also partnering with different groups on campus to respond to new trends. According to Matt Ramsey, director of Strategic Communications, there is now a working group called Substance Use Network operating across both UBC campuses in anticipation of the upcoming legalization of cannabis. It focused on health education and health promotion approaches related to substance use.

Apart from UBC, AMS VICE offers workshops on reducing the stigma of substance use and reducing substance usage, and has held two large-scale naloxone training parties in response to Vancouver’s ongoing opioid crisis.

— with edits from Sophie Sutcliffe