The Board is one of UBC’s most powerful governing bodies, yet it is composed primarily of individuals from the corporate world who are appointed by the provincial government, not the university.
Nathan Bawaan 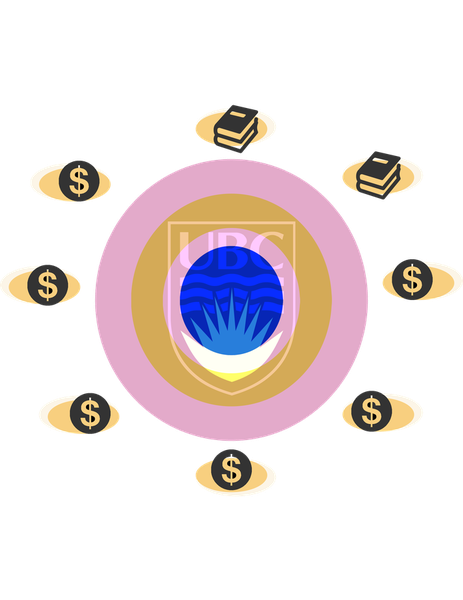 “Those who rise to positions of leadership have won the contest of who can seem most certain and overrule or ignore divergent opinions.”

These were the words of sociology professor, Dr. Jennifer Berdahl, in a 2015 blog post following the surprise resignation of former UBC President Arvind Gupta. In August of the same year, Gupta had suddenly resigned from his position after serving only a year of his five-year term, setting off a storm of speculation.

In the post, Berdahl theorized that Gupta had “lost a masculinity contest” with UBC’s Board of Governors over policy disagreements, resulting in his departure.

Her post was merely speculative, but nevertheless sparked backlash from then Board Chair John Montalbano. In a second blog post written shortly after the original, Berdahl detailed a phone call she received from Montalbano where he said that her post threatened the reputation of UBC’s leadership and repeatedly implied that her academic credibility would be questioned.

A subsequent external review from former BC Supreme Court Justice Lynn Smith found that this interaction was in violation of Berdahl’s academic freedom.

“It really opened my eyes up to the power of the Board, and the importance of having a well-trained Board that understands the academic mission of the university,” Berdahl said in a recent interview with The Ubyssey.

Berdahl’s story brings to light a critical issue with UBC’s Board of Governors.

The Board is one of UBC’s most powerful governing bodies, yet it is composed primarily of individuals from the corporate world who are appointed by the provincial government, not the university.

This has led to decisions that have triggered backlash from the university community.

Boards of Past and Present

Established in 1908, the Board of Governors serves as an oversight body at UBC.

Per the University Act, the Board is tasked with “the management, administration and control of the property, revenue, business and affairs of the university.” This involves approving the budget and creating both the university’s strategic plan and mission.

Historically, the Board has lacked faculty and student representation.

Faculty did not serve on the governing body until 1935 when the Senate began appointing them to better facilitate communication between the two bodies. Later, in 1974, these members were directly elected by other faculty.

Meanwhile, students and staff were not permitted to serve on the Board until 1975.

Today, Part VI of the University Act mandates that the 21-member Board of Governors be composed of UBC’s chancellor and president, in addition to 8 students, faculty and staff elected by their peers. The remaining 11 seats are appointed by the provincial government.

While two of these members must be nominated to the province by the university’s alumni association, the rest must simply be Canadian citizens or permanent residents. The Crown Agencies and Board Resourcing Office (CABRO), which oversees the recruitment of board appointees, has a public application portal on its website.

Currently, 10 of the 11 appointed board members are lawyers, entrepreneurs or finance professionals.

“There’s often a strong interest in making sure that there’s people with strong experience and oversight because [UBC] is a big and complex organization,” she said.

UBC is certainly a large institution, with a student population of 66,747 across two campuses, 17,791 faculty and staff, and an annual budget of over $2 billion.

While experience overseeing similarly large enterprises could be beneficial, some criticize the business-oriented makeup of the university’s chief governing body.

Corporations and large universities like UBC have some overlap, but their aims may differ. Theoretically, the former is profit-driven while the latter is usually focused on the expansion of knowledge.

This difference has led to clashes between the Board and some of the academic faculty of the university.

Dr. Charles Menzies, an anthropology professor who served on the Board as a Vancouver faculty representative until last year, argues that including more individuals from a variety of backgrounds on the Board is in the university’s best interest.

“If you come from a community-based grassroots organizing perspective where you haven’t had a lot of money, the idea of making profits isn’t what’s motivating you, but an idea of meeting social needs,” he said.

Menzies believes a more diverse Board may not change the decisions being made, but may add different perspectives.

“People might have ended up at the … same kind of decisions. But they’ve actually discussed them in a different range of perspectives that actually put meaning to the notion of diversity.”

Menzies does not believe that all business people should be removed from the Board. But by mainly appointing corporate individuals, he believes, the university’s leadership tends to replicate a model of thinking that has historically benefitted the dominant parts of society.

“We’re in a moment where everything is not normal. Having a normal thinking pattern isn’t necessarily the most effective way of dealing with our institutions,” he added.

Baby (Steps) On Board

Montalbano and many of the appointed members that served on the Board in 2015 when Berdahl published her blog post have since been removed by the government or have voluntarily resigned. Still, the current makeup of the Board of Governors leans corporate.

BC’s NDP government has indicated an interest in appointing people from different backgrounds to the province’s public-sector boards. With three appointed members’ terms expiring this summer, maybe a new type of Board will emerge.

Berdahl’s opinion is that a greater balance of corporate and academic voices is necessary for UBC to be run with the best interests of students and faculty in mind.

“Having two faculty members from Vancouver on the Board and one from Okanagan, numerically, diminishes the voices of faculty on the Board,” said Berdahl.